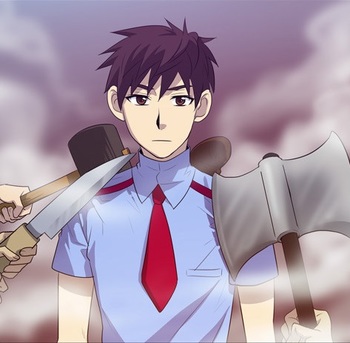 Just another day on the job.

The Protagonist. At the start of the story, he suddenly gained the ability to see game effects in real life, apparently at random. He eventually discovers that he has a natural supernatural ability that manifested in a very strange and useful way. 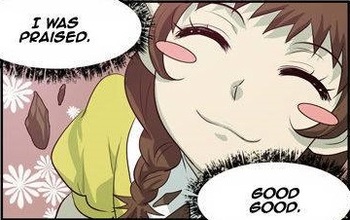 Jee-Han's earth elemental summon. She takes on the appearance of a small girl. She implies that her whole race is like this.

A water elemental contracted by Jee-Han in chapter 167

You can't see me.
Jee-Han's air elemental contracted in chapter 167 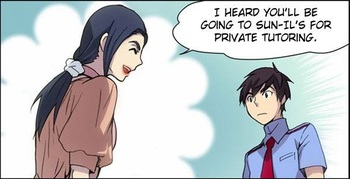 She bears watching, for several reasons.

Han Jee-Han's mother. Han Jee-Han was unable to see her true nature and level for a very long time. He thinks she is hiding something.

Han Jee-Han's father is away in the United States, as part of his unnamed job. 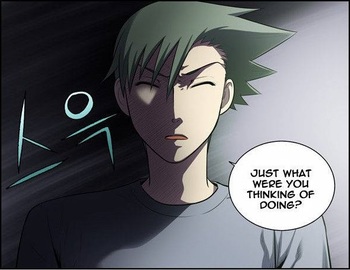 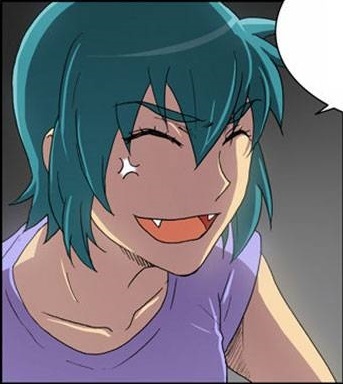 Brother of Shin Sun-Il and member of the Chunbumoon martial arts clan.

Brother of Shin Sun-Il and member of the Chunbumoon martial arts clan. 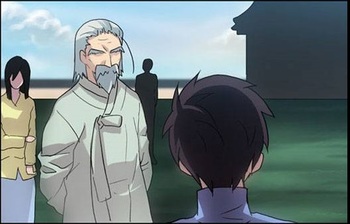 Treat this elder with respect, if you value your life.

The patriarch of the Chunbumoon clan, he is very interested in what Jee-Han is capable of.

In General
The effective rulers of the Korean Abyss and one of the strongest 10 factions in the entire world. They got their start by splintering from the Chubunmoon and quickly surpassed them in power and prestige, but the Chunbunmoon retains certain key advantages over them. They're led by the Chunbunmoon leader's older brother.
Bora Jin 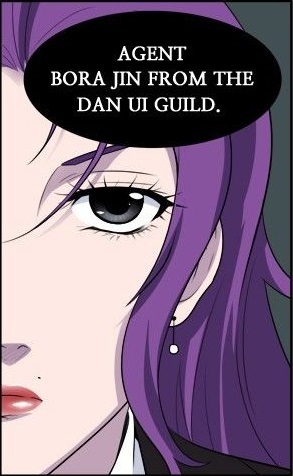 The Dan UI agent sent to deal with The Company and The Great Labyrinth Dungeon.
Ean Yeon 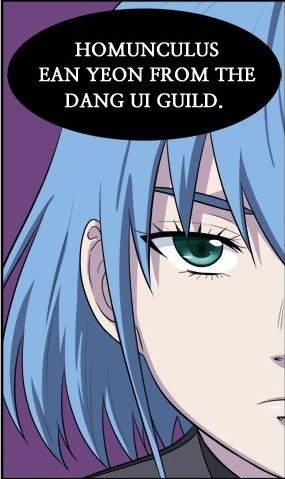 A homunculus that serves Bora Jin. 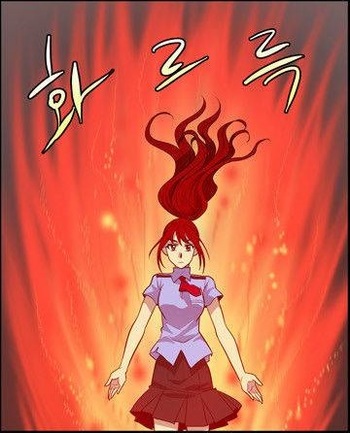 Classmate of Han Jee-Han and ability user of the "soul blaze fist". 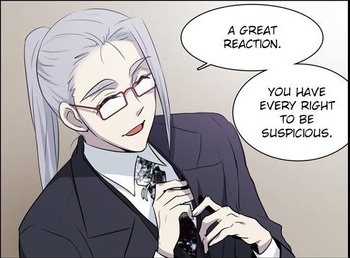 We here at the Abyss Auction sell everything. 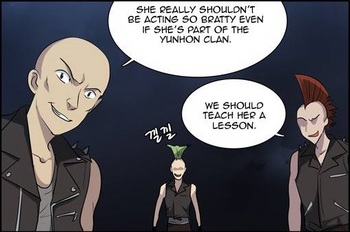 One of the minor antagonists that appears by going after Kwon Shin-Yun. 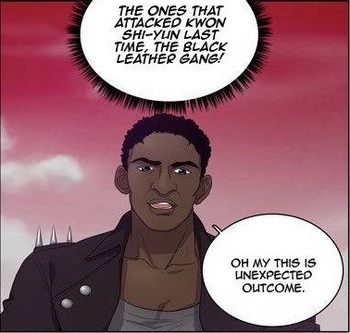 Leader of the Black Leather Gang. He appears as an antagonist in chapter 68. 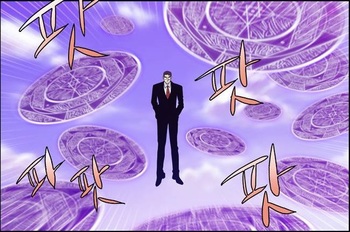 By far the most dangerous of the antagonistic groups shown to date. They live completely at the whim of their President with one prevailing purpose: To maximize profits regardless of the means. 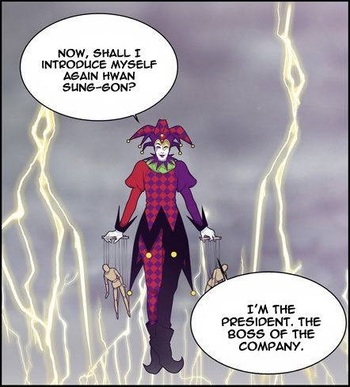 Don't ask for a Happy Meal. You won't like the result.

The top ability user in The Company. Its word is law, literally. In season 3 chapter 29, Hwan Sung Gon called him Chairman. 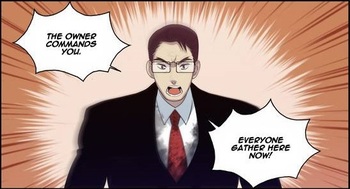 The top ability user of "The Company" aside from "The President", LINE translation use CEO instead of "Owner." 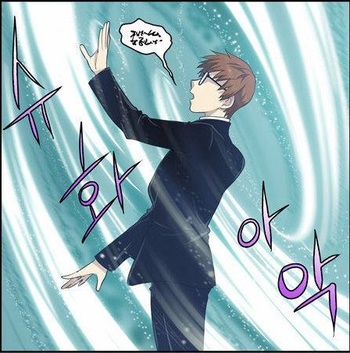 Nothing to see here, just a bit of remodeling... on an entire landscape.

One of the two top users working for "The Company." He is also known as one of the Ten Gates of Daehan. 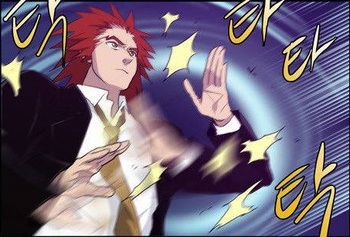 Another of The Company's top ability users. Also known as one of The Ten Gates of Daehan. 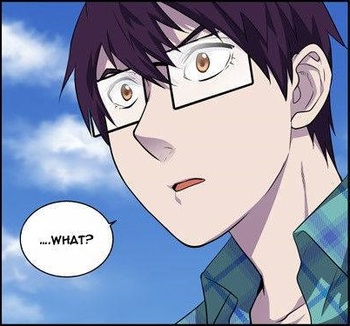 The antagonist starting in chapter 115. He attacks Han Jee-Han while the latter was searching for Yoo Jin to rescue her from the Abyss kidnapper who took her in chapter 113. 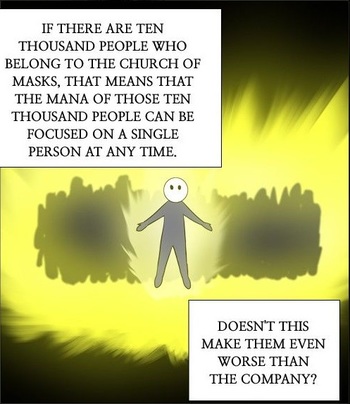 I am them, they are me, we are one!
A strange group of people first seen handing out pamphlets in Korea immediately after the Arc Company saga. For reasons still unknown, they've decided to target Han Jee-Han and Lolikano Mistream immediately after their visit to the Eastern Dragon King.
Yoohwa Shin

The Hive Queen of the Church of Masks.

In General
Based in the United States, they are one of the ten strongest organizations in the entire world. They have tremendous resources and specialize in mass production, but are short on people due to being relatively new among the great powers.
Doctor Faust

The person the legend of Faust

was inspired by in-story and the leader of Golden Circle. He is an alchemist and scientist from Europe. Out of the divine ten, the ten strongest people on the planet, he is the best known due to exposure from his constant efforts to invent new forms of power.

In General
An organization based in China. They specialize in alchemy and Supernatural Martial Arts.
Yeonhwa 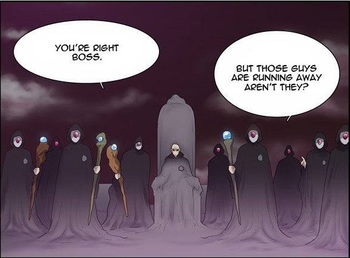 They take the term "stoners" to a whole new level.

A clan specializing in golem magic.

The Viking Guild
A group of hostile "players" encountered by Jee-Han and his group inside the Great Labyrinth in chapter 131. 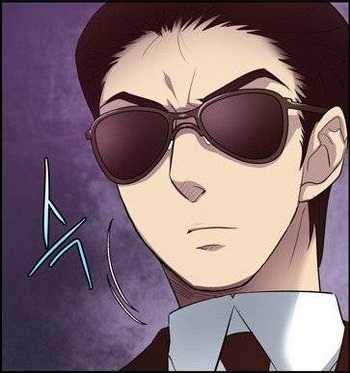 You would wish he's from M.I.B. 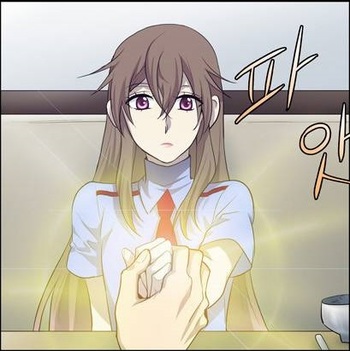 Yes, Heart Is an Awesome Power

The daughter of Hwan Sung-Gong. She is victim to the Black Demon's Invasion, a very powerful curse that's slowly draining her life force and will eventually kill her.

Also called the "Existence Eater", the Temporary Magician is an absurdly powerful person who gave up life in the Abyss to get a government job. He has been unable to succeed, making him a "Temp". The Temporary Magician, the Chunbumoon, and the Yunhonmoon are in charge of the local territory. 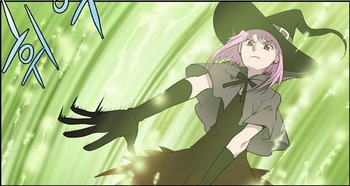 Beware the Silly Ones indeed.

A magical witch mercenary specializing in killing weak ability users. She's among the few sages in the world, skilled and powerful mages with vast knowledge of the magical arts. Aholting's partner. 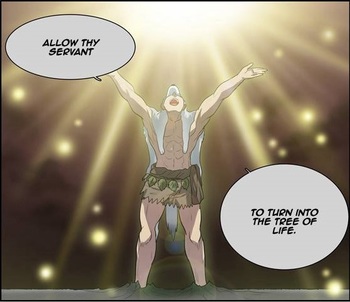 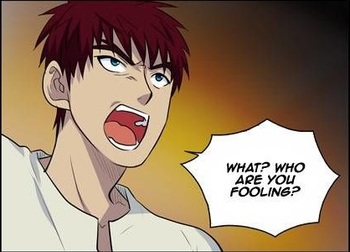 The President may be selling, but he's not buying.

Another large power within the abyss, he has apparently been using his influence to protect Jee-Han for reasons yet unknown. It is eventually revealed to be named Jin Da Jeon.

Fan Rui, The Lone Devil King
Yet another ability user powerful enough to boss "The President" around.
Sanghan Jin, "The Mad Necromancer" 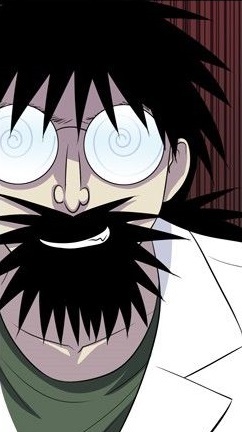 Your despair, give it to me!
The primary antagonist of the "Mad Necromancer Arc." A cruel, and sadistic "free agent" that the Chubunmoon clan tasks Jee-Han with hunting down. As of chapter 164, it's revealed he already has 152 innocent victims who he's sacrificed for magic that he fuels through despair.

Don't act up in his class. 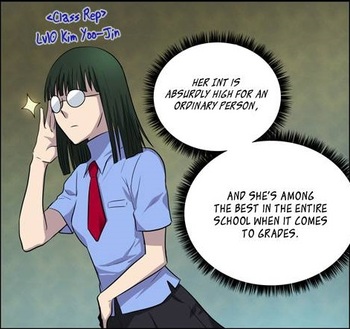 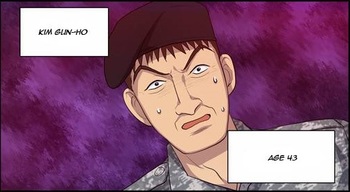 One of the "lackeys" that Jee-Han encountered in The Company arc. 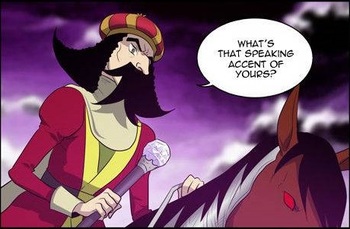 He's a lot scarier than he looks.

The great duke of hell. He is a powerful demon with a human-like appearance. 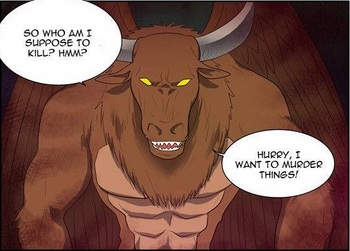 And he means it.

The president of hell. He looks like a winged minotaur.

A demon that can be found working many different jobs.

The strongest ruler of Hell.