Characters / The Fruit of Grisaia

The Fruit of Grisaia is the first of a series of Visual Novels by Front Wing. Unlike the later novels, it serves mostly to introduce the cast and is mostly a school based romance with only occasional hints as to Yuuji's true profession and life. 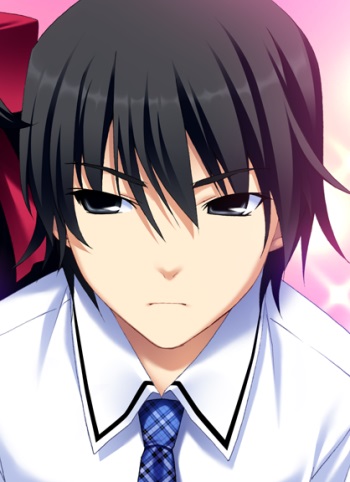 Voiced in the anime adaptation by: Takahiro Sakurai

The main protagonist of the Grisaia trilogy. Ace number 9029, Yuuji is the “janitor” for the underworld. Tired of the life, he wanted to live a normal school life. Cool, philosophical, and minimalist, Yuuji is a realist, but also tsundere. Being very cowardly, he always plans and scouts before action. Other than his occasional orthodontic military methods, he’s just a fit young man. However, his choice of disguising as a second year “exchange student from Canada” is questionable at best. 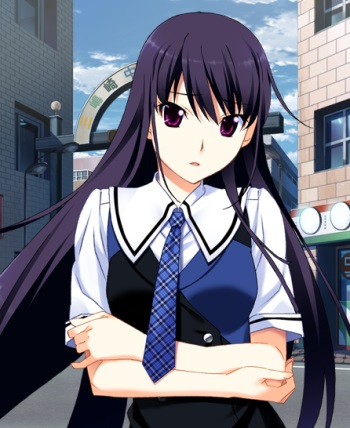 A second-year student in Mihama Academy, Yumiko is the only daughter of the tycoon of the East Beach Railway Express Group. After Mihama academy had been established, she was the first student to enroll. Her characteristic is a waist-length black hair. Because of her bluntness and hard-to-please personality, her association with strangers is bad. Always trying to be alone, she hardly meets with the others. She always carries a box cutter with her and use it to threaten others when she’s getting angry. She reads so many books that she’s called a “Bookworm”, especially when it comes to mystery novels. Although she acts like a proper lady most of the time, she also enjoys eating junk foods like a cup of fried soba noodles and surfing the internet.

Her representative fruit is grape. 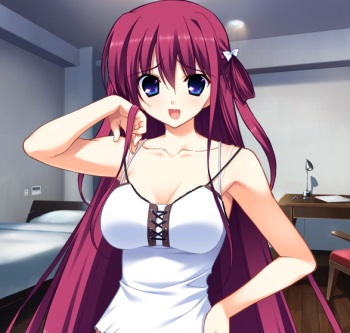 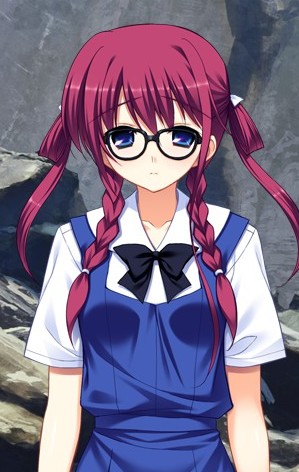 to see her younger self.
Voiced by: Hiroko Taguchi (Credited as: Sora Yukimi)

A third-year student in Mihama Academy, Amane is the big sister type who always takes care of others. For her own personal reasons and circumstances, she was forced to repeat one school year at her previous school, so in reality she is actually 2 years older than Yuuji. She is tall and has a well-developed body, a fact that causes Yuuji some degree of discomfort due to his past experiences in dealing with large women. Her family manages a long-established restaurant in Ginza, so she has been well-trained at cooking from an early age. Because her mother comes from Kyoto, when getting excited or panic, she sometimes talks in Kansai dialect. She has a deep interest in automobiles, and owns a two-wheeled vehicle license along with "Bobatarou", a heavily modified dirt bike currently sitting in the garage of the academy.

Her representative fruit is cherry. 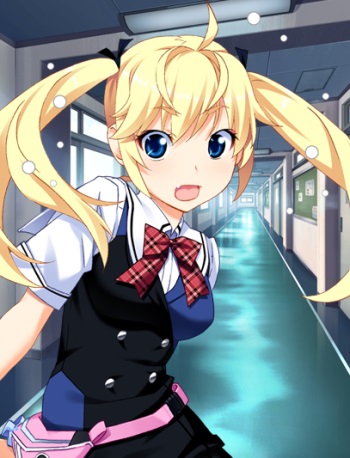 A second-year in Mihama academy, Michiru is a wannabe tsundere with bleached blonde twin-tails. She has a deep interest in tsundere-ness and tries to act like a tsundere herself, though she often falls short in hilarious fashion. With her silly and energetic personality, she acts as the mood-maker of the class, though she's academically somewhat weak and - even ignoring her ditzy personality - isn't the brightest spark. She always carries a shark-shaped pouch which contains lemonade-flavored "ramune" candy. Despite having difficulty dealing with sour foods, she still tries to drink 100% pure Vitamin C juice boxes in order to ostensibly “improve her intelligence”. She's been on the bad side of Lady Luck since birth, it seems, but she always manages to get through it in one way or another.

Her representative fruit is the lemon. 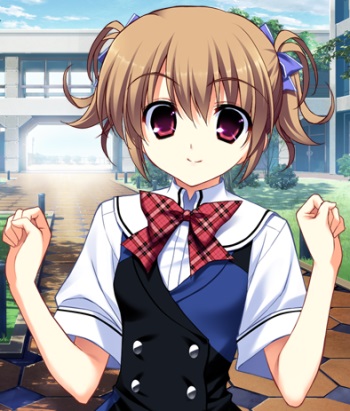 A first-year in Mihama academy, Makina is an innocent and carefree girl. For some unexplainable reasons, it’s hard to understand her personality. Though generally she could be most aptly described as a "fool", sometimes her speech and behavior make people shed cold sweat. She adores Yuuji as a brother and Amane as a sister. She calls Yuuji “Onii-chan”. Although she has her own room in the dormitory, she always stays in Amane’s room. She always wears knee-socks with 2 different colors. Because of her parents' work, she stayed in foreign countries until she was 6 so she can speak English, though not as well as she thinks. Her family is rumored to be a large financial clique which controls the underworld of Japan, but few people know of the unhappiness she suffers from for having been born to such a troublesome family. She was previously the successor to the Irisu family, but her right to inheritance was transferred to her younger sister, Irisu Sarina, after she suffered serious mental trauma following an incident.

Her representative fruit is strawberry. 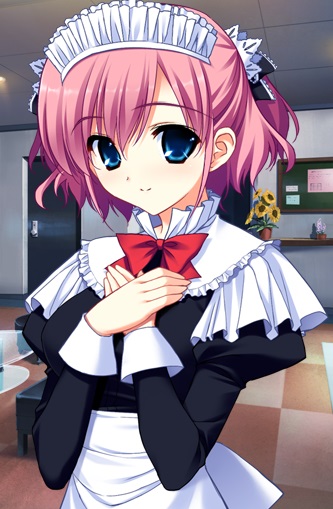 A first-year student in Mihama academy, and a self-proclaimed maid. Except when going to school, taking a bath or swimming, she always wears a maid uniform. She said that everyone told her to wear a maid uniform as much as possible. She's incredibly polite and has strong sense of responsibility, never failing to accomplish any request from others. In her dictionary, there are only 3 words: “receive” – “confirm” – “execute”. Because of this, she sometimes takes jokes too seriously and causes a lot of trouble. Her favorite animal is the shark. The shark-shaped pouch which Michiru carries around is made by her.

Her representative fruit is apple. 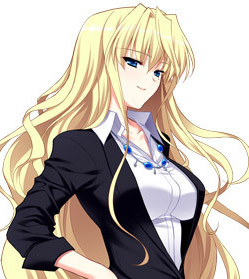 Yuria Harudera, better known as JB, is Yuuji's superior and something of a mother figure to him. She's his legal guardian, but she also enjoys flirting with him or teasing him in public in an attempt to irritate him. Not that she's being sadistic: It's revenge more than anything thanks to his own sarcastic attitude towards her. Though she works for the same 'company' that Yuuji does, it's noted that because she's in management her own hands are kept essentially clean.

Despite their bickering, she supports Yuuji one hundred percent, even when she isn't supposed to. 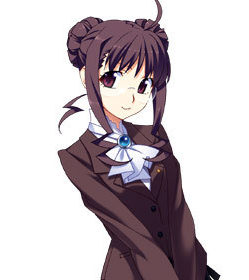 Chizuru Tachibana is the principal of the school and a former acquaintance of Yuuji's. Though uninvolved in his work, he saved her once and to repay the favor she offered him a place at her school as no other school could accept someone with his background and emotional issues. Yuuji seems quite fond of teasing her, which has led to her getting rather snappish around him despite her gratitude and affection.

Despite being around thirty, she looks approximately the same age as her students and frequently acts about as maturely as they do as well, up to and including being quite susceptible to Yuuji's flattery and flirting. 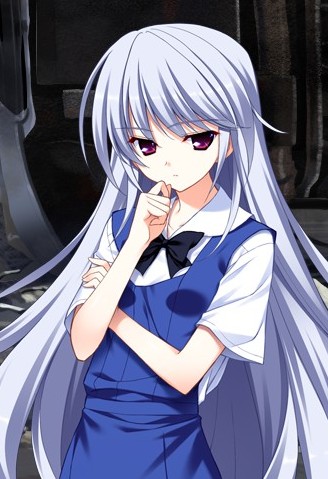 Kazuki Kazami is Yuuji's deceased sister. When he was in elementary school, she was pronounced dead during a nasty accident. Unlike Yuuji, she was noted to be a genius and exceptionally talented at almost everything, though she was quite small. While the rest of the family abused or ignored him, Kazuki loved her brother a great deal. In fact, they were close enough to worry Kazuki's only real friend, who had to gently inform her that normal sisters don't play with their brothers like that.

Yuuji notes that Kazuki usually had on a rather sleepy expression in contrast to her sharp attitude and keen intellect. She was very calm and focused, but also clinical and detached even during serious situations.

Asako was Yuuji's former master. After spotting him in a lineup, she declared that he could still be saved and took him under her wing and began raising him. She was both harsh and sweet, capable and incompetent and drilled many of her own values into Yuuji. Thanks to her job of bringing him up, he can at least act normal, but now possesses a strong wariness for the horrors of large women.

Asako is deceased before the story begins and does not appear even in flashbacks in Kajitsu, leaving most information about her to be picked up secondhand from her friend JB or Yuuji himself. Her story is fleshed out in Labyrinth of Grisaia. 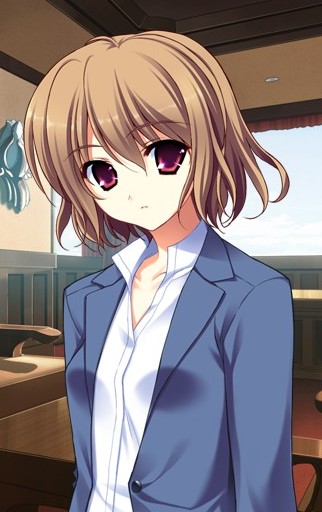 Makina's mother and the current head of the Irisu clan. She's a rather unpleasant person beneath some superficial politeness and is only referenced in passing during the main story, which Makina says her mother hates her. Yuuji does not contest the claim, which earns him some measure of trust from Makina.

Makina's father. He was assassinated around eight years ago for attempting to divulge the corrupt practices of the Irisu family. He was the only honest executive of the company and the only member of Makina's family that cared about her. 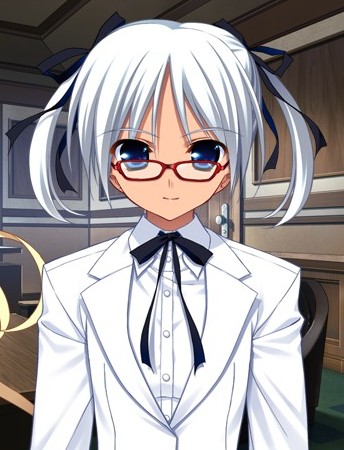 JB's assistant. Much to JB's irritation, she is yet another of the annoying people that like to gather around her and pick on her. Despite that, she is very loyal and devoted. Yuuji only meets her in Makina's route, where he muses that she has a nice butt. 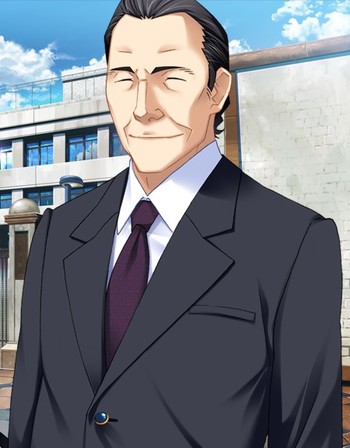 Yumiko's father, the president of the East Beach Railway Express Group, and the founder of Mihama Academy. Yumiko seems to bear ill will against him and refuses to get involved with him whenever he is brought up. 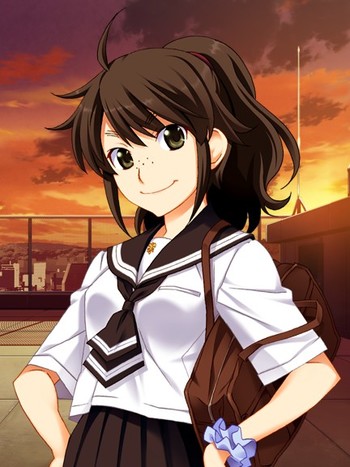 A girl Michiru met on the roof of her previous school who was just about to commit suicide by jumping over the fence. After calling out to her to not jump, Michiru introduces herself to the girl and she laughs, resulting in the two becoming best friends and hanging out together. However the circumstances behind her attempted suicide was soon revealed to be something even more problematic, putting more pressure on her to finish what she started and end her life. 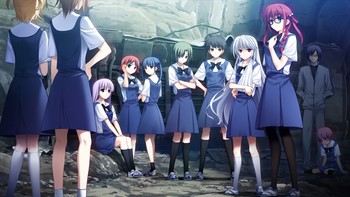 A group of female students and one teacher who got into an accident when their bus went off the road during a school trip. Amane was among them and was the only one to get back to safety. While a few girls were killed when the bus went off the road, the others survived and lived through worsening conditions for several weeks. Their eventual fates played a large role in Amane's current emotional trauma. 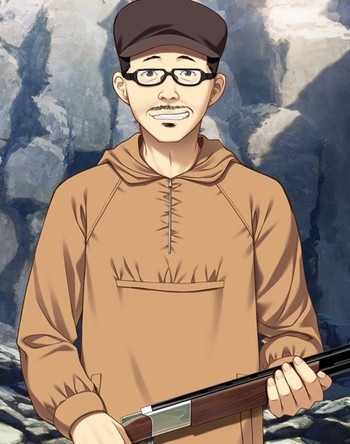 Chiaki Sakashita's father who'd recently became unemployed after his company went bankrupt. After losing everything, including his own daughter in the bus crash, he snapped and decided he had to avenge his daughter's death.

Michiru's other personality who always shows up whenever she suffers from anxiety. Unlike the original, this Michiru is much calmer and seemingly more intelligent, generally taking control whenever Michiru is about to undergo a panic attack and cleaning the situation up for her. She's trying to help, but Michiru finds this extremely disturbing whenever she becomes aware of it. In the Manga adaptation of Michiru's route, her name is given as Lisa.