Characters / The Fresh Prince of Bel-Air 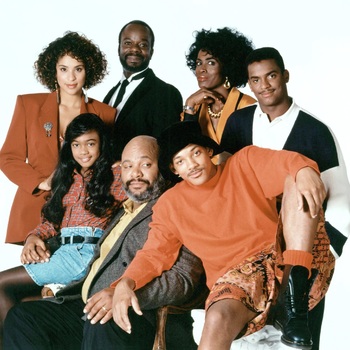 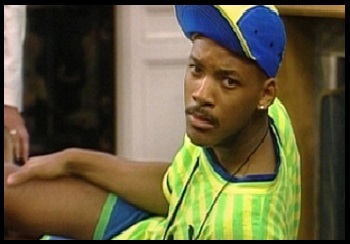 "My horoscope says that I'm gonna be a famous rapper with a TV show."
"My fault, man! I must have got the wrong crib. I didn't know there were so many brothers living in this neighborhood! We're doing all right, huh?"

The title character. Once a street-wise youth in Philadelphia, a skirmish with a bully causes Will to be sent to live with his wealthy relatives in Bel-Air, California. The show focuses on Will living and interacting with the upper-class society and residential celebrities. Later on, there's more focus on Will's college life. 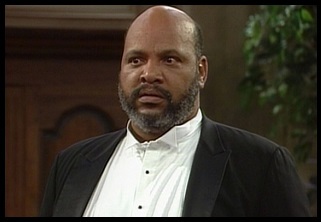 "DO I LOOK LIKE A WHITE GUY NAMED WARD?!"
"Well speaking as a lawyer, I can only say that your daughter fits the criminal profile to a T, right down to the sloping forehead, and the wide jaws suitable for grains and small rodents!"

A successful attorney (later appointed Superior Court Judge) who doesn't try to hide his reluctance to Will settling in with the Banks. Spends a good portion of the show dealing with Will's antics and help fix any mess made. 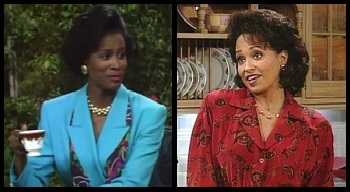 "Oh, honey, we about to get very busy here."
"We used slang when we were kids! Do you remember our first date? You took one look at me and said, "That is a bad dress!" You could've just said it was a good dress."

The second-oldest of the Smith sisters, and Will's maternal aunt, who's a well-educated professor at the local university. Unlike Phil, Vivian's far more open and patient with Will when he first moves in with the Banks, and understands that transitioning from inner-city Philadelphia to the ultra-wealthy Bel Air will be difficult for him. 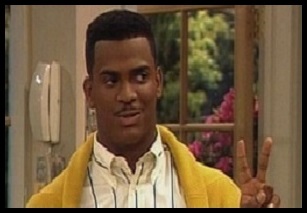 "I'm getting ready for Soul Train. I believe there's dancing involved."
"For a long time it gave me nightmares, having to witness an injustice like that. It was a constant reminder of how unfair this world can be. I can still hear them taunting him. "Silly rabbit, Trix are for kids." ...How come they just couldn't give him some cereal?!"

The middle child of the Banks family who strives to get into Princeton and be a successful lawyer like his dad. More confident in the law and order in general, Carlton's at odds with Will more than frequently, though by the later half of the series he becomes The Lancer. 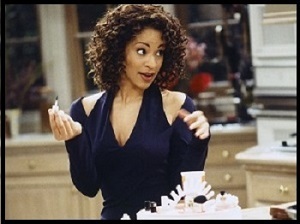 The spoiled elder child of the Banks family, Hilary's a socialite bent on being looked highly upon by her peers in the upper class. She also leeches off her parents' fortune and is ignorant of how life outside of hers really works. 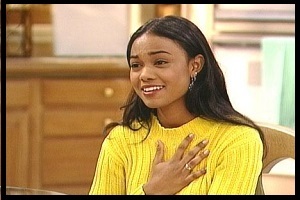 The youngest Banks daughter, she instantly took a liking to Will once he arrived and very much looked up to him. Gradually, she became bent on being less of daddy's girl and more open and a bit rebellious, even out of Will's control. She is the only one of the Banks children to have something like a normal adolescence with common teenager issues. 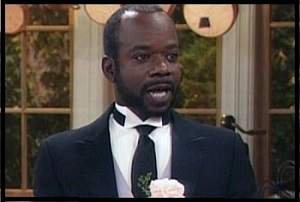 "Sarcasm? Whatever do you mean?"
"I would prefer an assassin's bullet to this kind of living hell."

The Banks family butler, an older English man who outside of the witty barbs has a great relationship with the family. 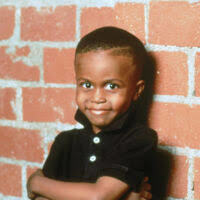 The youngest of the Banks children, born during the run of the show. But don't let that make you think he didn't have any Character Development, he grew as much as the others did.

Will's best friend in L.A. (played by Will Smith's actual rap partner) who met him while performing at a nightclub. Jazz functions as a Drop-In Character, often showing up unannounced (and unwanted) at the Banks house to eat the family's food, scheme with Will, unsuccessfully flirt with Hilary, and generally insult Uncle Phil. Phil's dislike of Jazz quickly evolved into a Running Gag featuring Stock Footage of him being thrown from the house while grunting. Despite being dimwitted and occasionally manipulative, Jazz does care for Will (and the rest of the Banks family as well), and goes the extra mile for them on more than one occasion.

Will's sharp-tongued mother, and the oldest of the Smith sisters. Had a hand in raising her younger siblings; as a result, she often feels as though they don't respect her if they decide to go against her wishes. Despite this, she has nothing but love for her family, especially her son.

Will's deadbeat father, who ran out on him and Vi when he was only four years old. He comes back into Will's life nearly 15 years later, with Will finally getting to experience some of the father-son times he'd previously never had... only to leave him again after promising to take on a cross-country trip.

Uncle Phil's dynamic mother, whom Will is particularly fond of. She often tells Will and the Bankses tales of Phil's upbringing on their farm in Yamacraw, North Carolina, often to Phil's embarrassment.

The second-youngest Smith sister, and Will's aunt. A bit of a loudmouth with snark for everyone she meets.

Will's uncle, and Aunt Helen's husband. Implied to have a bit of a "wandering eye". Helen ends up divorcing him.

Will's cousin, the son of his Aunt Helen and Uncle Lester. A bit of a handful.

The Token White husband of Will's Aunt Janice.
Other Characters

A professor at Bel-Air Academy during the first season. Also employs the same street vernacular as Will, to a painful extent.

The basketball coach at Bel-Air Academy during Will and Carlton's sophomore and junior years there.

One of Will's best friends from Philadelphia, who visits Will and the Banks family in season one. While there, he and Hilary begin a short-lived relationship.

Self-obsessed news anchorman, whom Hilary falls for. Ends up dying by way of a poorly-executed bungee jump, done as part of a marriage proposal to Hilary on live television, in part two of the season four premiere.

Uncle Phil's former mentor, whom Phil ends up running against for Superior Court Judge in season three. Shortly after Robertson wins the election, however, an angry outburst from Will causes him to suffer a fatal heart attack, and Phil takes his place. He's not to be confused with Hemsley's other character, George Jefferson, who Hemsley reprises in two episodes of Fresh Prince.

An old friend of Will's who ends up attending ULA with him for a short handful of episodes in season four.

Jazz's wife throughout seasons four and five. A hardened criminal who isn't afraid to speak her mind, no matter how brutal her honesty.

Will's longest-serving girlfriend, and the closest to Earth of the two. Their relationship and engagement makes up the majority of season five.

Lisa's blue-collar father. Though he develops a (too) close friendship with Will, he initially sees the Banks family as upper-class snobs before bonding with Uncle Phil. In the season five finale, he ends up marrying Will's mother Vi.

The producer of Hilary's self-titled talk show. Only seen in season six.

A medium psychic with wizardly abilities. Only appears in "Hex and the Single Guy" of season 4.