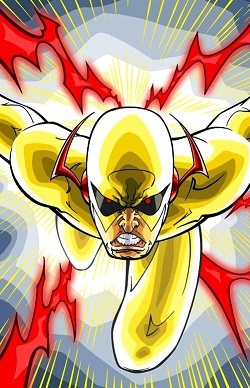 I've been given a gift. A gift I can pass on to the Flash. In order for him to become stronger he must face the ultimate tragedy. He must face his ultimate opposite.
Advertisement:

"It's time that I embraced the truth. Thawne was right. The Flashes do not deserve my faith. They deserve nothing. If the Flashes refuse to see the road to being a better hero...then I will take them down a road...to WAR!"

Dr. Hunter Zolomon, a.k.a. Zoom, or the Reverse-Flash, is a DC Comics supervillain first appearing in The Flash: Secret Files & Origins #3 (November 2002). He is an enemy of the Flash Family, especially the third Flash, Wally West.

Originally a Keystone City profiler and a valuable friend and ally to Wally, he was paralyzed by Gorilla Grodd during a breakout in Iron Heights. When Wally refused to go back in time to stop this from happening (because of the risk of damaging the timestream) Hunter tried to use the Cosmic Treadmill himself, but it exploded. Instead of killing him, it gave Hunter the ability to alter how time flows in relation to his inertial frame. Inspired by Eobard Thawne, he believes Wally didn't help Hunter because Wally had never experienced personal tragedy, so he went out to do so, later applying the same methods to other heroes.