The First Dwarf King is a setting with Loads and Loads of Characters. If we were to list them all, we'd be here all week. However, here are some of the more prominent ones.

The protagonist of the story. A young hunter from the village of Nujar who finds himself in the midst of a brutal war. He doesn't think much of himself at first, but soon discovers that his destiny is to lead.

Iris
Jani's girlfriend. She stands by him in the midst of even the most brutal situations. She can shoot and hew with the best of them.
Armo
Jani's best friend since childhood.
Dagmar
Armo's girlfriend/wife and Iris's best friend.
Aulis
A dwarven hero of legend. It was he who killed the Demon Lord in single combat.

General Elven Tropes
Eustathios
An elf who gets caught in a situation he never wanted. He winds up having to fight alongside the dwarves.
Phryne
The queen of the elves.
Poniros And Skotia
Phryne's nephew and niece.

General Human Tropes
Cenric
The king of Derune, husband of Aristomache, and father of Leofric.
Aristomache
The queen of Derune, wife of Cenric, and mother of Leofric.
Leofric
The prince of Derune and son of Cenric and Aristomache; husband to Amirah.
Jabbar
The king of the Fulonians and father of Amirah.
Amirah
The princess of the Fulonians, daughter of Jabbar, and wife of Leofric.
Jelani
King of the Holomites.
Agmundr
The king of the Craglanders; husband of Borghildur.
Borghildur
The queen of the Craglanders; wife of Agmundr.
Elof
A Craglander warrior who encounters the dwarves on their quest.

General Tarsian Tropes
Kenta
Emperor of the Tarsi and husband of Aimi.
Aimi
Empress of the Tarsi and wife of Kenta.
Daichi
The son of Aimi and Kenta (thereby making him a Tarsian prince).
Maruto
Shogun of the Tarsian army.
Masaru
Leader of the Tarsian air force. (Definitely not to be confused with Maruto above.)
Father Kiyoshi
Pastor of Toshi-tatsu. He ends up accompanying the heroes on their adventure. 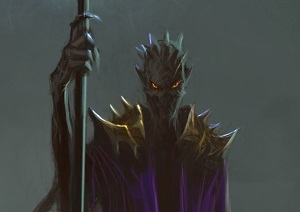 The demon's leader (or is he?) and secretly Trang Barok's master.
The Osthan
Pathruushkè's personal bodyguards and assassins.
Cophthera-gn
A...thing summoned by a demonic ritual.
The Demon Lord
The demons' first ruler.