Characters / The Expanse TV The Rocinante

Crew of the Rocinante

The Rocinante began her life as the MCRN Tachi, a Martian Navy frigate that operated from the hangar of the battleship MCRN Donnager, the Martian Navy's flagship. In the wake of the Donnager's destruction, the Canterbury survivors claimed the Tachi as their own and re-christened her as the Rocinantenote Spanish for "Work Horse" as well as the name of Don Quixote's horse, see Jim Holden's entry below. 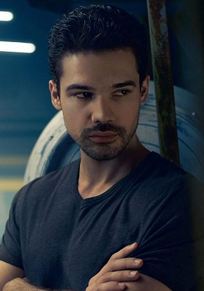 "I'm nobody's savior!"
Played By: Steven Strait
"Earth and Mars have been stepping on the necks of the Belters out here for over 100 years and I didn't want to be the boot."

Jim Holden is the Second Officer of the ice trawler Canterbury (which supplies water for the Asteroid Belt's residents). This position offers him freedom and a minimum of responsibility.

A Montana native, he is the only child born to eight parents as part of a genetic collective. At a time when Earth's population is over 30 billion, there are big incentives for people not to have children. Holden's family is fighting to preserve one of the last undeveloped wildernesses in Montana; a losing battle that Holden joined Earth's Navy to escape.

In the UN Navy he served as a First Lieutenant until an ideological conflict turned into a physical confrontation, and Holden was made to face court-martial. After being dishonorably discharged from the Navy, Holden took a contract with Pur'n'Kleen (owner of the Canterbury), looking to get as far from home as possible. 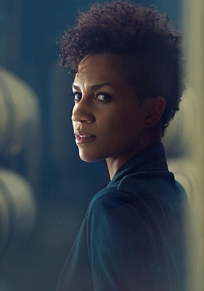 "I fix ships, not people."
Played By: Dominique Tipper
"Every shitty thing we do makes the next one that much easier, doesn’t it?"

Growing up on poor Belter mining ships meant that Naomi's early life was lived on a knife's edge: nearly suffocating, starving, and becoming marooned were regular occurrences throughout her childhood.

Self-educated with multiple advanced degrees, and having risen to the rank of Chief Engineer aboard the ice trawler Canterbury, she appears to be a model Belter success story, though she carries with her a secret pain.

She is cagey about her past, even with her closest friends. She abhors violence, but has witnessed enough injustice to understand the necessity of it.

Her complicated relationship with violence and her troubled history have lead to an unlikely friendship with the Canterbury's mechanic, Amos Burton. 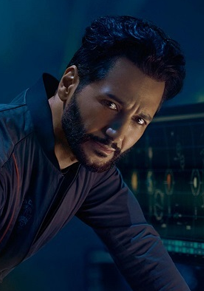 Played By: Cas Anvar
"If that thing out there really is some sort of human-protocrap hybrid, then we're yesterday's model. Obsolete."

A pilot for the Pur'n'Kleen ice trawler Canterbury.

Having grown up in Mars' Mariner Valley, Alex was raised with the incongruous Texas drawl that has caught on among the largely Indian and Chinese population who live there. Unlike the rest of his sizable family on Mars, Alex looked at the generations-long terraforming project with a sense of restlessness and dread. He just couldn't bear the thought of whiling his life away on a project he would never see completed. With dreams of flying fast attack gunships, he enlisted in the Martian Congressional Republic Navy. After his tour ended the call of adventure proved too strong to resist. Signing up with Pur'n'Kleen gave him the chance to visit the farthest reaches of the solar system. 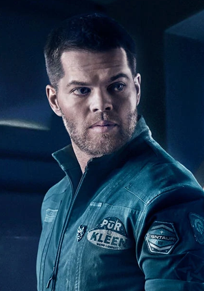 Played By: Wes Chatham
"The way I see it, there's only three kinds of people in this world: Bad ones, ones you follow, and ones you need to protect."

A mechanic aboard the Pur'n'Kleen ice trawler Canterbury. He's an Earther who doesn't talk about his past – but knows a lot about brothels and Baltimore. He's eerily comfortable, and even cheerful, at the prospect of violence. 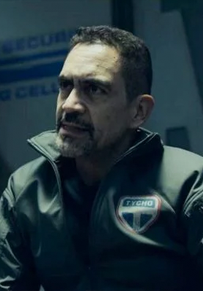 Tycho's security chief following Drummer's departure. A curmudgeon and a racist, Bull is an old comrade of Fred Johnson's from his days in the UNN who regardless joined the OPA out of loyalty to Fred despite his vehement distrust of Belters. 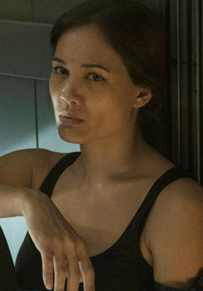 The daughter of Jules-Pierre Mao. She once tried to frame James Holden in revenge for her father's imprisonment, but she would later join the crew.

Beware of spoilers!
The Investigator 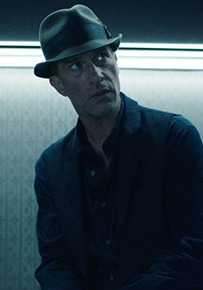 "You're a tool that goes places. I'm a tool that finds things."
Played by: Thomas Jane
"I tried to be the angel. But I was so scared. So she held my hand. And I told her "If you fall with me it ain't gonna be for halfway."

A mental construct generated by a cluster of the Protomolecule left behind on the Rocinante following the battle with the Hybrid. It has taken the form and consciousness of Joe Miller and appears only to Holden as a hallucination, guiding him towards an unknown purpose.

Other Allies/Passengers
There are many other characters that, while not official crew members of the Rocinante, they have worked together with them temporarily or are close friends of the crew members. This is a list of those characters, along with links to the pages where their information is located. Bolded character names are other major protagonists on par with the Roci crew.