The Martian Congressional Republic is an independent nation, locked in a cold war with Earth.

At the beginning of the TV series Mars has a population of around 7 billion, compared to the 30 billion on Earth (which is officially suffering from overpopulation problems), and the 50 - 150 million Belters living in the asteroid belt and outer planets.

The Martians are driven by a unifying sense of purpose to terraform Mars into a new Earth, because the old Earth is polluted and used up, and they don't want to repeat the mistakes of the past on their new home. Some Martians see this as a noble, desperate attempt to beat a ticking clock, because they think Earth is already a lost cause. In contrast to the bloated bureaucracy and massive overpopulation problems on Earth, the Martian Congressional Republic is driven by efficiency and a united political will. Mars also spends disproportionately on military research and development - unlike the fractious Earther politicians dividing the United Nations, the MCR is driven to take united action to make up for its relative lack of infrastructure compared to Earth. The result is that Mars regularly fields stealth technology which neither the Earthers or Belters possess. 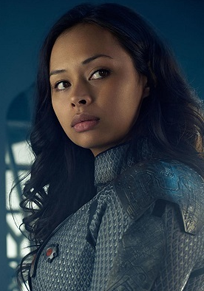 Played By: Frankie Adams
"I have never crossed anyone first. But burn me and mine and I'll go through you like a door."

A member of the Martian Marine Corps. The toughest member of her squad and a disciplinarian when it comes to anyone acting out of line, she is a fiercely nationalistic Martian dedicated to the dream of terraforming the planet. 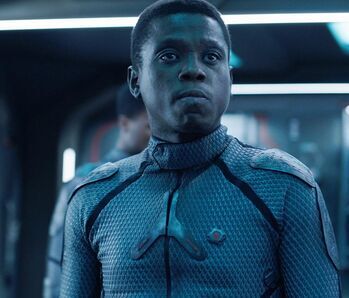 A member of Draper's squad. He is disliked by his colleagues due to being an Earther, though he's spent most of his life on Mars and is fiercely patriotic. 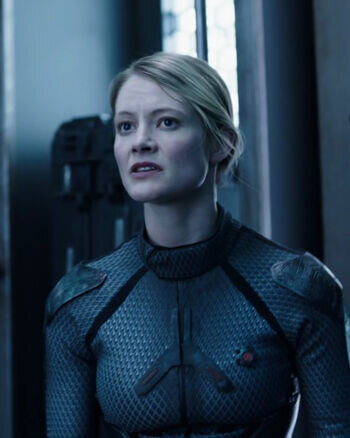 A member of Draper's squad who hails from a well-off family. 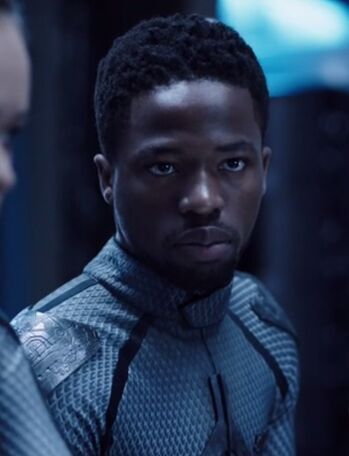 A member of Draper's squad. 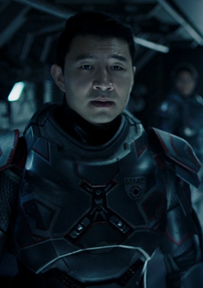 An MMC marine stationed aboard the MCRN Xuesen and Bobbie's CO following her reinstatement. After the arrest of Jules-Pierre Mao and the Ring's activation, Mayer's team is sent in to investigate the Nucleus station, and to apprehend Holden following his...possibly Sanity Slippage. 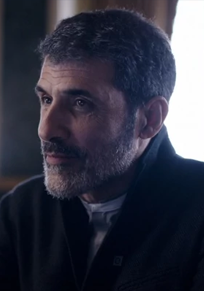 Portrayed By: Jeff Seymour
"Don't quote me, but Earth still makes the most beautiful music."

MCRN Minister of Defense and the Martian diplomat sent to Earth to nail down the details on the cease-fire and restitutions following the Ganymede incident. Like Martens, he's also hiding quite a secret... 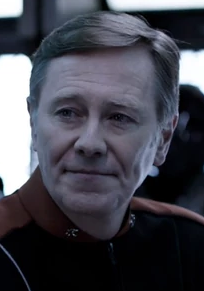 Portrayed By: Peter Outerbridge
"Truth and fact are not the same thing."

Ostensibly an MCRN chaplain, he appears to have ulterior motives.

An MCRN admiral and instructor that Bobbie suspects is the mastermind behind the conspiracy to sell MCRN tech to Belter terrorists.

A Martian Admiral, and the apparent leader of the Martian splinter group working with Marco Inaros. 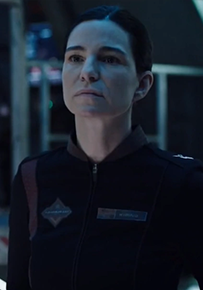 Captain of the MCRN Hammurabi and leader of the Martian Jupiter fleet. After receiving a communique from Avasarala through Ensign Sinopoli of Errinwright's treachery, she forwards the video to Souther to have him removed - all the while preparing her fleet against Earth's. 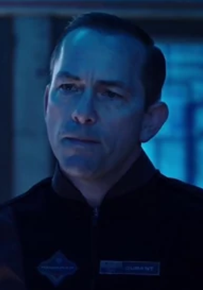 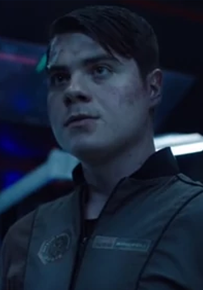 One of three survivors rescued by the crew of the Roci from the MCRN Kittur Chennamma. After meeting Avasarala face to face, he's given a very special task that could end the war. 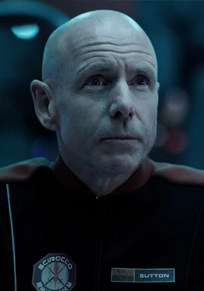 Portrayed By: Hugh Dillon
"Earth knows the price of escalation as well as we do."

Draper's commanding officer, who is just as dedicated to Mars but tends to act with a cooler head. 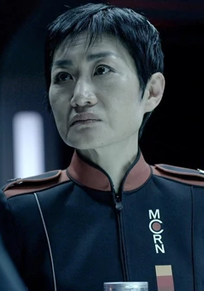 Portrayed By: Jean Yoon
"They started this fight, and we're going to finish it."

The captain of the MCRN Donnager. Unlike most of her crew, Yao was a combat veteran having spent three years fighting pirates in the belt. 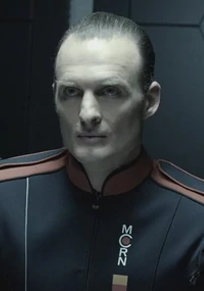 Portrayed By: Greg Bryk
"The only things Earthers care about is government handouts. Free food, free water, free drugs so that you can forget the aimless lives you lead. You're short-sighted and selfish, and it will destroy you."

A key intelligence officer and resident interrogator on the MCRN Donnager.

A crime boss on Mars

One of Esai's criminal associates.