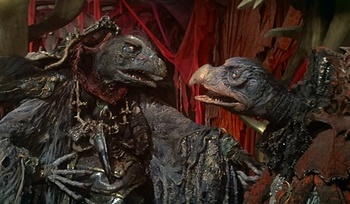 The Skeksis are reptilian humanoids with heads of birds of prey who took control of Thra and rule it as "lords of the Crystal". Both the Skeksis and the urRu/Mystics actually spawned from the urSkeks, when the Crystal was cracked during the last Great Conjunction.

For about a thousand years, the Skeksis ruled with the trust of the Gelflings and managed to hide their depravity and exploitation of the Crystal's powers from them... until they found out the corruption they inflicted on the Crystal made it extract the life essence of nearby creatures, and used that essence to prolong their life. They turned on the Gelflings to obtain the purest of said life essence, which caused the Gelflings to rebel.

When prophecies revealed that the tyranny of the Skeksis would end when the missing shard is found and the Crystal is restored by a Gelfling, the Skeksis went on a campaign of genocide. With the help of their new Garthim soldiers, they managed to wipe out the Gelflings, leaving only two known survivors, Jen and Kira.

The Castle of the Crystal

The Skeksis who rule Thra from their seat of power, the Castle of the Crystal. They use the powers of the cracked Crystal for their own benefits, no matter how destructive their actions are for Thra. 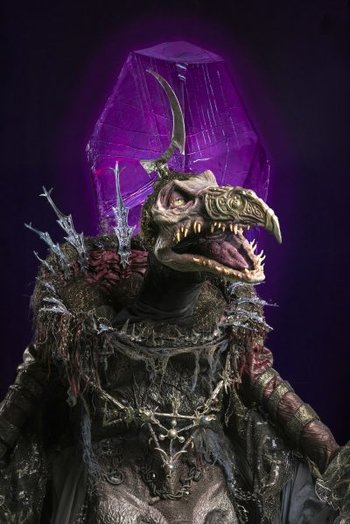 "I did not build an empire only to watch it turn to dust." 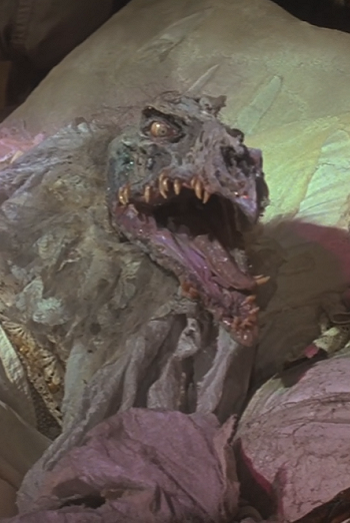 "...never forget, there is absolutely nothing in this world that does not bend to my will."

The first Skeksis Emperor, who revelled in manipulating the destructive force known as the Darkening, which spawned out of the Crystal when it was cracked and corrupted. He is dying as of the beginning of the 1982 film. 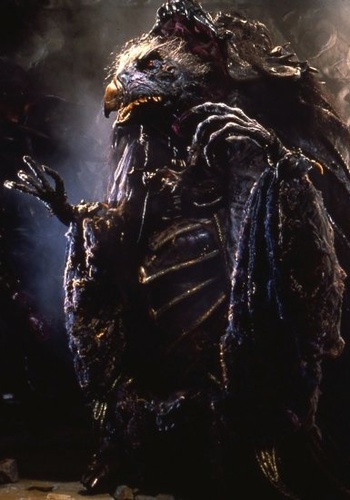 Appears in: The Dark Crystal

"I hate your whimper!"

The strongest of the Skeksis by the time of the film, and the one in command of the Garthim. He challenges the Chamberlain for the throne after the death of Emperor skekSo, and wins the Trial by Stone, thus becoming the new Emperor. 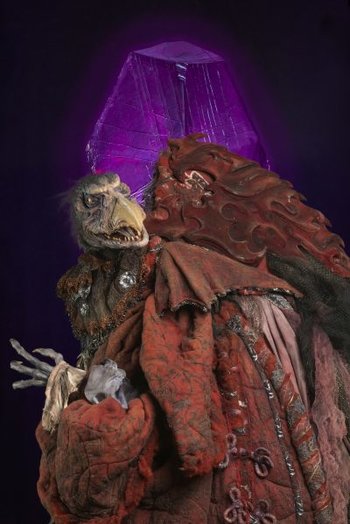 "This is what I do. I plant stories in ground, watch grow into truth."
[[quoteright: 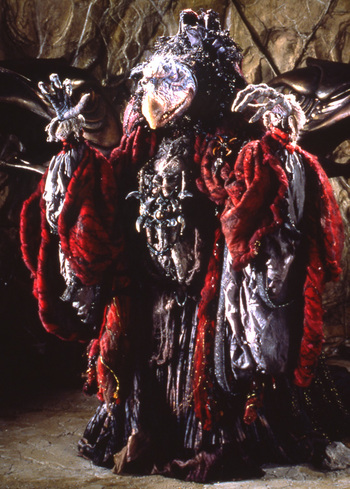 ]]
"Stay! Am friend! Prophecy! Prophecy caused all this trouble!"

The slimy, constantly scheming and whimpering chief secretary of the Skeksis court and second in line to the throne. With mere suggestions to his brethren, he broke the hundreds of trines old status quo between the Skeksis, which ended in a war that caused the Gelfling's near-extinction. After the death of the Emperor, his greed for power led to a challenge for supremacy by skekUng the Garthim Master, when he decided to crown himself emperor. The Chamberlain responded by declaring the challenge be a Trial by Stone. After losing the Trial by Stone, the Chamberlain was banished as punishment.

Has a Self Demonstrating page. 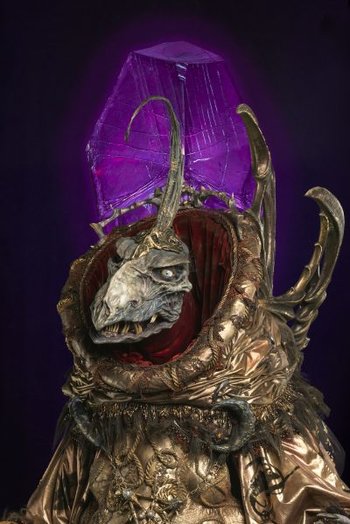 "Rapturous! I will create a new ritual for the consuming of essence. One with many ablutions." 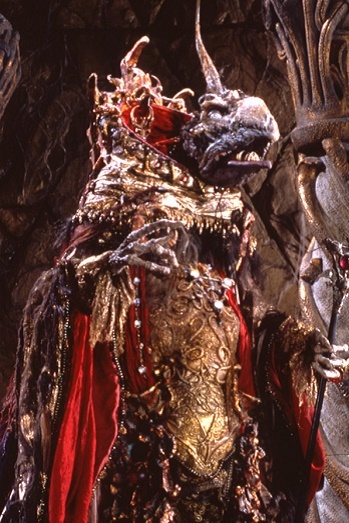 "Watch your tongue, harridan! We are lords of the Crystal!"

The court high priest of the Skeksis. He leads the Skeksis in their various rituals and practice such as the Ceremony of the Sun, and he sees their laws as absolute and inflexible. He also tries to control the other Skeksis with false prophecies and divinations, but they soon learn better. 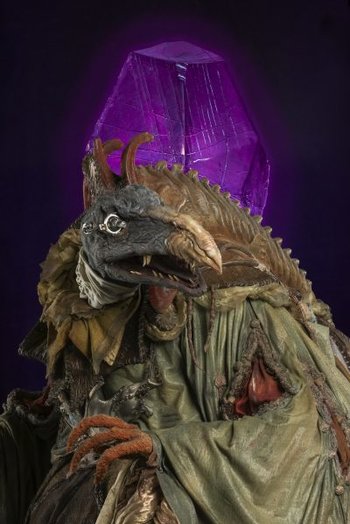 "The only mercy I have to offer is death!" 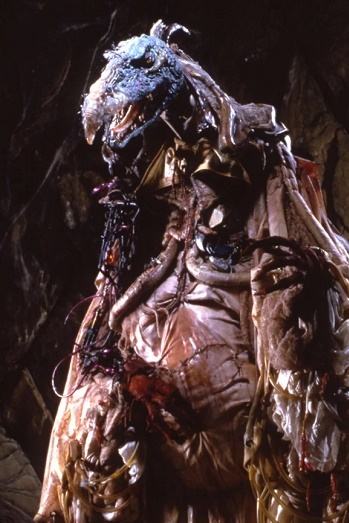 "It always worked better when we used Gelflings..."

"I am skekTek, the Scientist! I am a master of life and death. I am a genius! I am a Lord of the Crystal! I AM SKEKSIS!"

The Skeksis whose task if to find solutions to extend the lifespan of his species. One day, he discovered that the Crystal can drain the life essence of Thra's creatures. 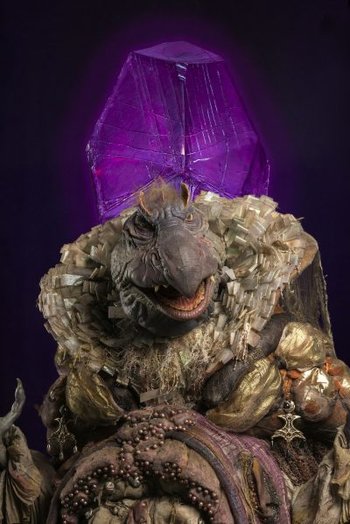 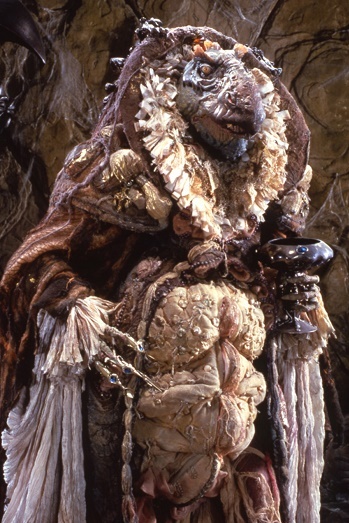 The Skeksis court's food specialist. He likes sweet liquors and hot spices, and he boasts to have a different menu for every feast. He's in charge of the castle's kitchens and feasts. 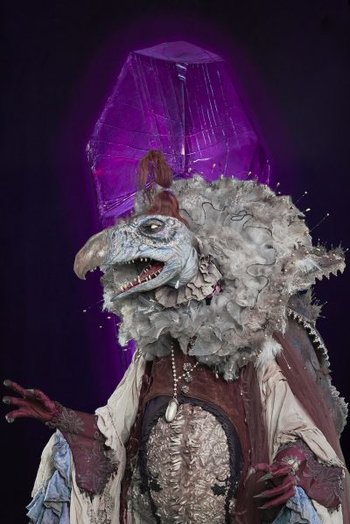 "Life is my paint, death is my canvas!" 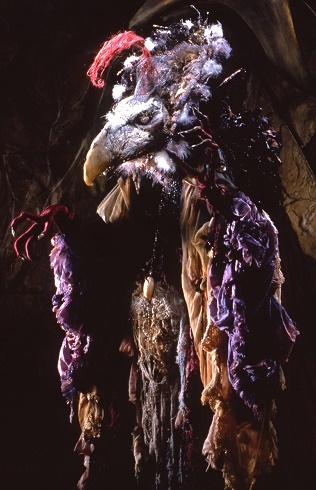 "There's going to be a fight!"

The most effeminate of the Skeksis by far, he is frequently seen to be screaming dramatically and being very flamboyant. He is in charge of the castle's decorations. 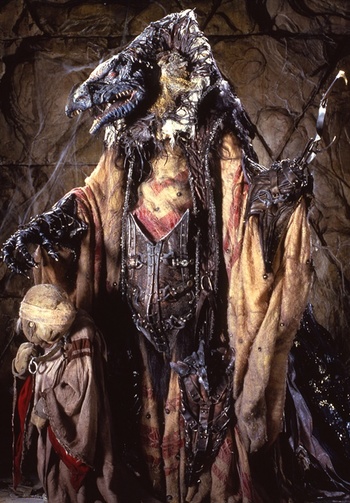 Appears in: The Dark Crystal

The Skeksis who's in charge of the Castle's Podling slaves. 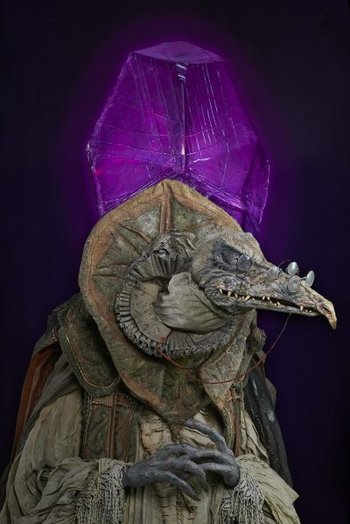 "Watch yourself, Gelfling. Little things have a habit of being stepped on by big things." 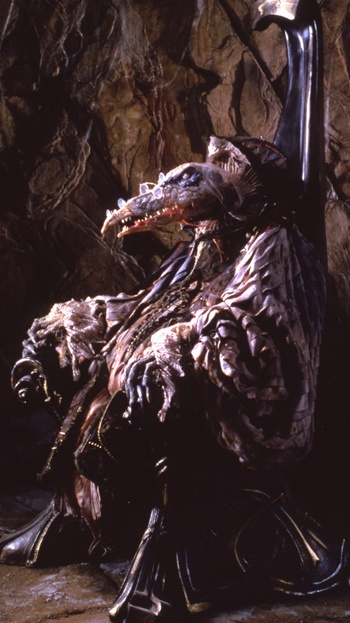 The shortest of all the Skeksis and their historian. He keeps rewriting his accounts in order to please his shifting allies, which often causes the truth to be lost. He always arrives late to the meetings and usually falls asleep during them and he could often at times be found mumbling to himself. 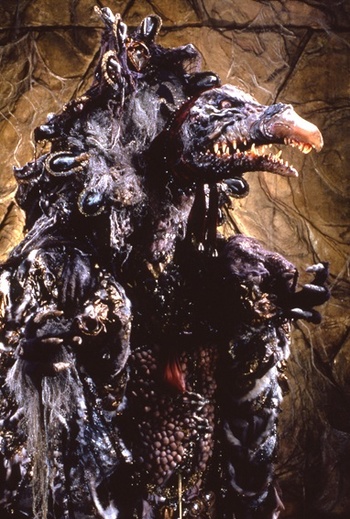 The Skeksis Treasurer. He counts gifts, and because his greed is so great and his speech so limited, the only way he got his ways was extravagant bribery.

skekVar The General (formally the Ambassador) 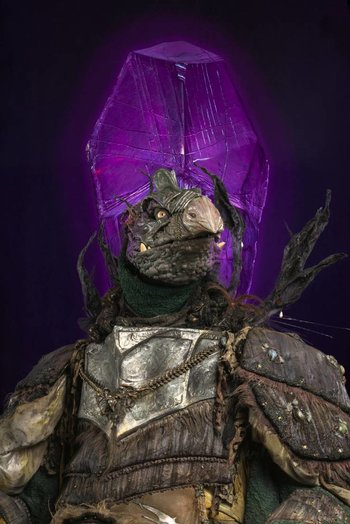 "Why waste our time with talk when we have talons?" 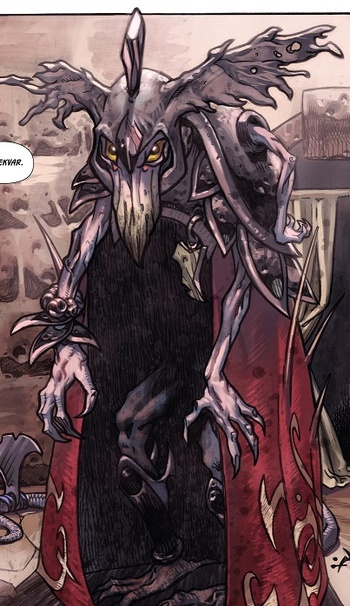 "And when skekSil's lies do not work, the Emperor turns to his General for a more forceful solution. A master of martial skill and strategy, skekVar is perhaps the most honest of his dishonest brethren, but not above using dirty tricks."
— The Evil Skeksis, Excerpted from a Gelfling journal, Entry Date: Rosunday, 14th Moon, 96 Years A.G.C

The quick tempered military commander of the Skeksis at the time of Age of Resistance.

skekLach the Collector (formally the Census-Taker) 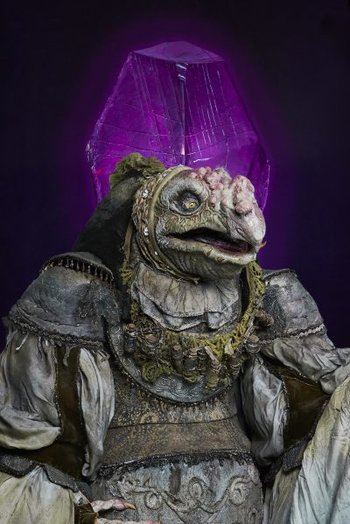 "Do you see this face? Once this was a beautiful face, but then came knowledge."

A disease-ridden Skeksis who collects tributes from the Gelflings. Loosely adapted from the villain of the Legends of the Dark Crystal manga, where he oversaw the collection of Gelfling prisoners for essence draining.

Constructs of the Skeksis

Artificial creatures who serve the Skeksis residing in the castle of the Crystal. 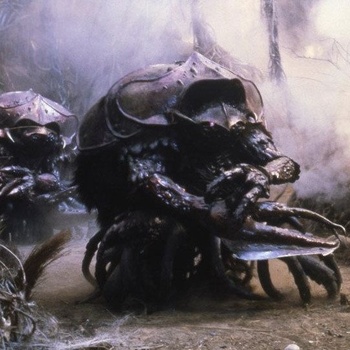 When it appeared that the Skeksis were doomed due to not having an army of their own when facing both the Gelfling rebellion and their Arathim allies, they turned to skekTek the Scientist to create fearsome, soulless and loyal soldiers who would blindly serve them and fight for them. The Garthim were born, and the Garthim War began. They were used to exterminate the Gelflings, and replaced them as guards of the Crystal's castle. 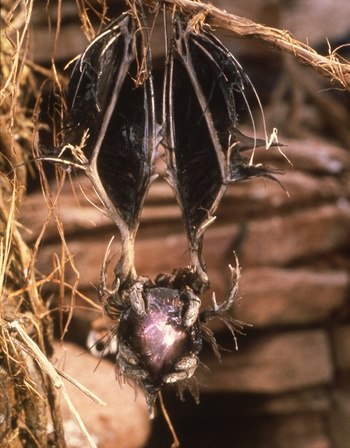 Appear in: The Dark Crystal

Bat-like flying creatures that, like the Garthim, are animated by the power of the Dark Crystal and serve the Skeksis. They carry a purple crystal that shares what they see with the Crystal at the castle, allowing the Skeksis to spy on and find their preys pretty much anywhere on Thra.

Skeksis who don't reside at the castle. 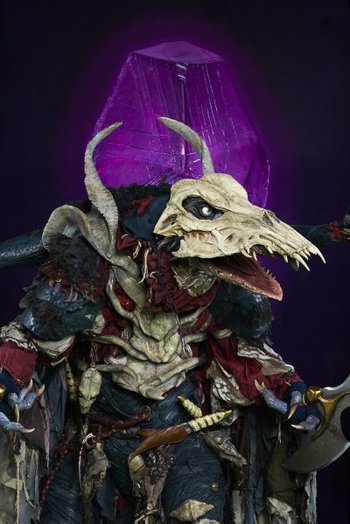 "When will you learn? Only the hunt matters!"

"Although he considers himself a "sportsman," skekMal is nothing more than a brutal hunter. The wildest of the Skeksis, he frightens even his own kind. He uses all manner of traps and bears a scar across his face. Lightning fast, he can actually dodge arrows and disappear into the trees in front of him. And whatever he catches…he generally eats. Although most Gelfling clans do not know skekMal, they know the legend of "the Hunter" and they know that no one has ever escaped alive. SkekMal uses a 'spirit-like' mask to conceal his true identity."
— The Evil Skeksis, Excerpted from a Gelfling journal, Entry Date: Rosunday, 14th Moon, 96 Years A.G.C

The wildest and most brutal of the Skeksis by the time of Age of Resistance. Essentially a solitary hunter who will go to great lengths to track and kill his preys if he deems the hunt worth it.

skekGra the Heretic (formerly the Conqueror) 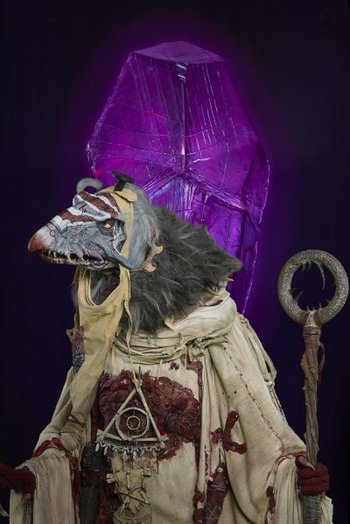 "Once I was known as skekGra The Conqueror. The others cast me out and branded me Heretic."

Appears in: The Dark Crystal: Age of Resistance

"Oh, it's wonderful to see you! Do you see my wonder? Look upon my wonder!"

A Skeksis who was banished by his brethren and has lived with his Mystic counterpart, urGoh the Wanderer, on top of a desert rock called the Circle of the Suns. Unlike the others, he believes the Skeksis and Mystics should be reunited.

skekSa the Mariner (also known as the Captain) 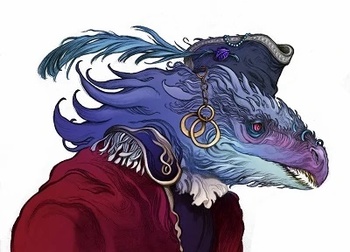 "While the Emperor lives, there is no power for anyone else. Except him."

A sailor Skeksis who took to the seas after disagreeing with skekSo's rule that ends up getting pulled into their efforts to destroy the Gelfling resistance. 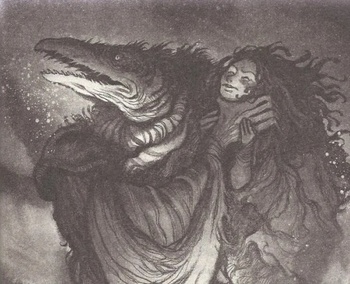 Appears in: Song of the Dark Crystal

The Skeksis who wrote satire stories for the enjoyment of the other Skeksis.

The Machinist and The Deceased

Two Skeksis seen at the end of Volume 2 of The Dark Crystal: Creation Myths. They were the ones who died immediately after the botched division of the urSkeks. When one of the Skeksis goes rogue in the Crystal Chamber, it proceeds to kill two urRu — one is choked to death, while the other is thrown into the fire Shaft under the Crystal, leading to the deaths of their Skeksis counterparts. skekHak came from the urSkek Architect hakHom, while skekYi came from the urSkek yiYa, whose position is unknown.