A character subpage for Guild Wars 2. For the main character page, see here.

A hero carrying a multitude of titles and accomplishments, who rose to prominence first among their own race and then an Order of Tyria. As the Pact is being formed to combat Zhaitan and the Elder Dragons, they are appointed as Pact Commander, second in command. The Commander spearheads the fight against the Elder Dragons, and is often a valued voice amongst the other leaders of Tyria.

open/close all folders
In General
Elementalist 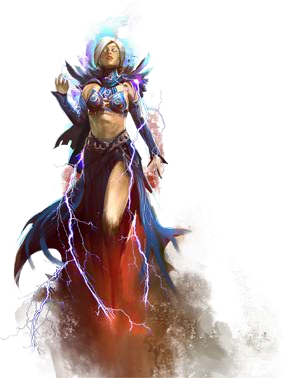 Elementalists harness the power of the four elements—water, earth, fire, and air—to cast powerful spells. Their ability to change their elemental attunement midcombat is versatile but difficult to master.

In Heart of Thorns max level elementalists can begin training to become Tempests allowing them to use Warhorns and shout skills and giving them more AOE capabilities and very strong support capabilities.

In Path of Fire max level elementalists can begin training to become Weavers, a high damage Magic Knight that weaves elements together to create new elemental abilities and uses swords and stances. 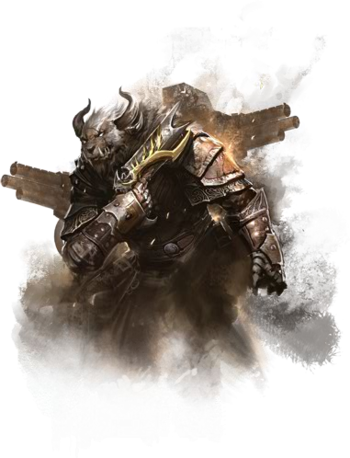 Masters of mechanical mayhem, engineers love to tinker with explosives, elixirs, and all manner of hazardous gadgets. They can take control of an area by placing turrets, support their allies with alchemic weaponry, or lay waste to foes with a wide array of mines, bombs, and grenades. Engineers are jacks-of-all-trades and, with enough time, masters of many. Able to bring dozens of abilities and toolbelt skills to a fight, their art is in choosing the right one to utilize at the perfect time.

In Heart of Thorns max level engineers gain access to the Scrapper, a bruiser specialization that uses Gyro drones and hammer. They can gain Fuction Gyro, which allows them to multitask abilities like reviving allies and finishing off weakened opponents.

In Path of Fire max level engineers gain access to Holosmith, a high risk high reward specialization that uses hard light projections to deal very high damage. They gain access to Photon Forge mode, which allows them to use unique skills. Photon Forge builds up heat, and if they spend too long in this mode the Holosmith will explode dealing massive damage to themselves. They gain access to Swords and Exceed skills that become stronger the more heat they've built up. 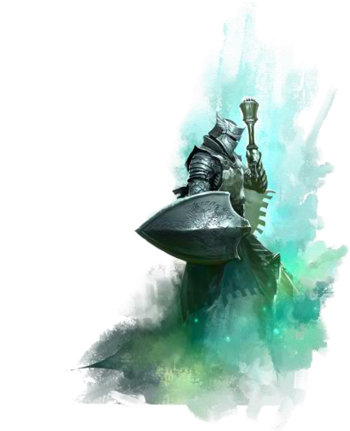 Guardians are devoted fighters who protect their allies and smite their enemies by drawing from the power of their virtues. Guardians gain powerful personal enhancements from their virtues, which they can briefly expend to aid friends or damage foes. Formidable on their own, guardians shine brightest in the company of allies.

In Heart of Thorns max level guardians can train to become Dragon Hunter. Dragonhunter gains the ability to use a longbow and trap skills. Virtues also become more physical when activated, manifesting as a spear of immobilizing light, wings that convey the Dragonhunter to a target destination, or a wall-shield to block enemy attacks.

In Path of Fire max level guardians can train to become Firebrands. Firebrands trade their virtues for Tomes, which allow them to summon ancient books allowing them to wield powerful offensive, healing, and defensive capabilities. They also learn Mantras, which each have 3 charges, with the last being more powerful than the previous two. They wield an axe in their main hand.

Masters of magical misdirection, mesmers create and shatter clones and illusions of themselves in battle. Mesmers rely on evasion and subterfuge requiring finesse and practice to perfect.

In Heart of Thorns max level mesmers can train to become Chronomancers which control time. They can equip shields for increased defensive and supportive capability, and gain abilities to alter their allies' skill cooldowns with an effect called "alacrity" and slow down their enemies actions and increase their cooldowns.

In Path of Fire max level mesmers can train to become Mirages. They wield an axe in their mainhand, and give up their ability to dodge for the Mirage Cloak, which allows them to avoid hits without interrupting their actions or requiring a dedicated dodge roll. They specialize in Deception magic. 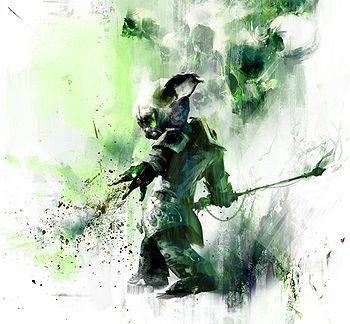 Necromancers of Tyria are monsters on the battlefield, draining life force from their enemies and entering a death shroud that temporarily grants them powerful abilities and protects them from harm.

In Heart of Thorns necromancers can train to become Reapers. Becoming a reaper grants access to the greatswords, shout skills and an alternative "Reaper's Shroud". Their skills offer slow but powerful damage and crowd control, invoking the style of classic movie monsters and classic Death Knights from other games.

In Path of Fire maximum level necromancers can train to become Scourges. Scourge essentially give up their shroud ability to summon sand wraithes that they can channel abilities through that can either heavily corrupt their enemies or protect their allies with barriers of sand. They use a torch to help them with this. They use Punishments to defeat their enemies. 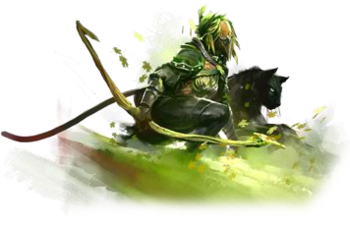 Rangers tame a variety of pet companions to complement their fighting style. Rounding out their arsenal with traps, nature spirits, and survival skills, they have the tools to take on any type of foe.

In Heart of Thorns rangers can train to become Druids. The Druid as a specialization is Guild Wars 2's first real classic healer. They can wield staffs and temporarily transform themselves into Celestial Avatars capable of healing and sustaining small squads of allies. They learn glyphs that change function whether or not the druid is in Celestial form.

In Path of Fire rangers max level rangers can train to become Soulbeasts. Soulbeasts learn to merge with their pets, not only learning new Stances but some of their pets' skills. They wield a dagger in their main hand. 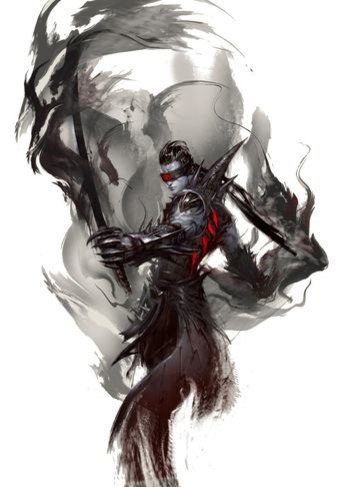 Revenants invoke the power of legendary heroes from Tyria's past, spending their own energy to channel the abilities used by those figures. They are reliable allies and dangerous enemies.

In Heart of Thorns max level revenants can train to become Heralds, which allows them to channel Glint, the benevolent dragon that rebelled against her masters and sought to protect Tyria instead. Heralds can equip shields to protect and heal allies. Invoking Glint provides access to "facet" skills which provide auras and buffs when first activated, and can be consumed/re-activated to unleash powerful area-of-effect blasts.

In Path of Fire max level revenants can train to become Renegades which allows them to channel Kalla Scorchrazor, the female charr who helped fight the shaman caste and allowed females to fight in warbands once more. They wield a shortbow, summon Kalla's warband members to buff allies, and can tear a fabric in reality to do various attacks. 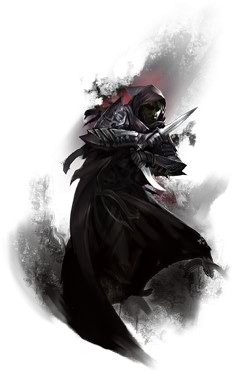 Experts at stealth and surprise, thieves can move through the shadows, vanish into thin air, or steal items from their opponents and use them as weapons. Thieves practice an agile, acrobatic fighting style, which can make them very hard to hit. Thieves manage their initiative during combat, expending it to unleash carefully timed attacks. What they lack in defense, they make up for with skills to debilitate, teleport, or vanish from sight.

In Heart of Thorns max level thieves can train to become Daredevils. Daredevil takes the concept of the speed and agility further, granting a third endurance bar for more dodges and an array of physical utility skills that interrupt and disable enemies. Their trademark weapon is a staff, but used as a melee striking weapon rather than a magical implement.

In Path of Fire max level thieves can train to become Deadeyes. Deadeye is a sniper class, using a rifle to shoot enemies from afar. They use Cantrips to increase their accuracies, and have a new mechanic of Malice that does extra damage to their marked target. 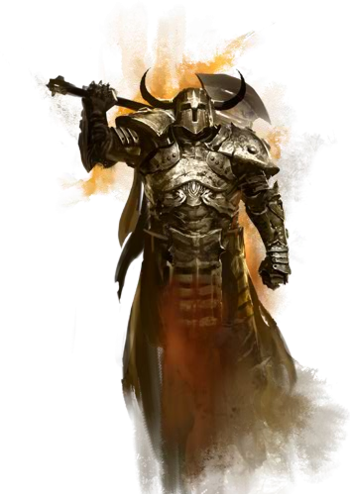 Warriors are masters of weaponry who rely on speed, strength, toughness, and heavy armor to survive in battle. Adrenaline fuels their offensive power—the longer warriors stay in a fight, the more dangerous they become. Warriors build their adrenaline by successfully striking an enemy, then expend it to unleash devastating burst attacks. Warriors are versatile and resilient fighters.

In Heart of Thorns max level warriors can train to become Berserkers. This elite-specialization gives the warrior a Super Mode that greatly enhances their adrenaline-based attacks. They can equip a torch and deal powerful fire-based condition damage and become significantly more focused on offensive capabilities, to the point where even their unique heal skill requires doing damage to get the most out of it.

In Path of Fire max level warriors can train to become Spellbreakers. Spellbreaker is a boon-denial Mage Killer dueling class, capable of wielding daggers in both hands and specialize in Mediation skills. They give up one rank of Adrenaline in order to be able to Full Counter enemies.