Characters / The Authority Midnighter
aka: Midnighter 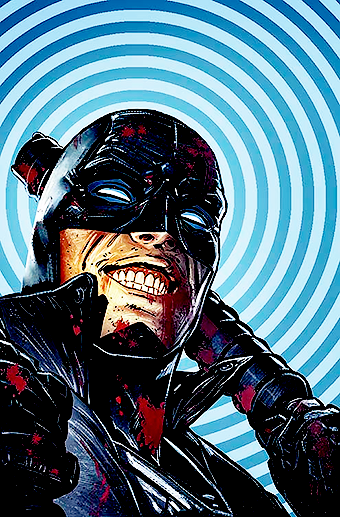 Described by his creator Warren Ellis as "The Shadow by way of John Woo," Midnighter first appeared in WildStorm's Stormwatch #4 (Vol. 2), as a former member of a black ops squadron run by Henry Bendix, aka Weatherman. During his tenure on that team, he met his husband Apollo, a solar-powered superbeing in the vein of Superman to his own Batman. Realizing Bendix was going to send him and Apollo on a Suicide Mission with their team, the two managed to escape and proceeded to spend years in hiding from Stormwatch. It wasn't until they learned of Bendix's deposition from the new Weatherman —Jackson King— that the two emerged from the shadows, eventually becoming co-founding members of a new team lead by Jenny Sparks, called The Authority.

Midnighter served as a long-standing member of The Authority (and even received his own solo title) in the following years, before Wildstorm's absorption by parent company DC Comics. Following the events of Flashpoint, Midnighter —along with many of his Wildstorm cohorts— was imported into New 52 continuity, placed on new iteration of Stormwatch led by Martian Manhunter. After a brief Continuity Reboot, reverting he and his Stormwatch teammates back to closer recollections of their Wildstorm selves (in a bid for boosted sales) proved unsuccessful, the reset was undone, and DC's Stormwatch ended at #30.

Since then, Midnighter has showed up in the pages of The New 52: Futures End and Grayson in supporting roles. Starting June 2015 (after Convergence and the end of DC's New 52 branding), Midnighter appeared in his second ongoing book, this time written by Steve Orlando and illustrated by ACO. Following DC's Rebirth relaunch, Midnighter ended and was replaced by a Midnighter and Apollo title, featuring Midnighter reunited with his lover, who he had been temporarily estranged from in the previous series.