Characters in The Asterisk War are sorted according to their main allegiance within the light novels, anime series, manga and video games.

A work in progress.

All spoilers regarding the first six volumes are unmarked.

One of the six schools in Asterisk, the one attended by the main cast. Seidoukan Academy is patterned after Japanese schools. Their governing IEF is Galaxy.
In General
Ayato Amagiri 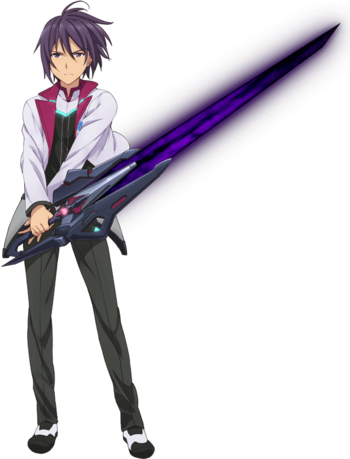 The son of Masatsugu and Sakura Amagiri, Ayato was trained by his older sister, Haruka, as a swordsman and martial artist in the Amagiri Shinmei Style since he was a child. When Haruka disappeared, Ayato transferred to Seidoukan to learn about what has become of her. Ayato famously defeats Kirin Toudou in a duel and wins several tournaments to become Seidoukan's top-ranking student. 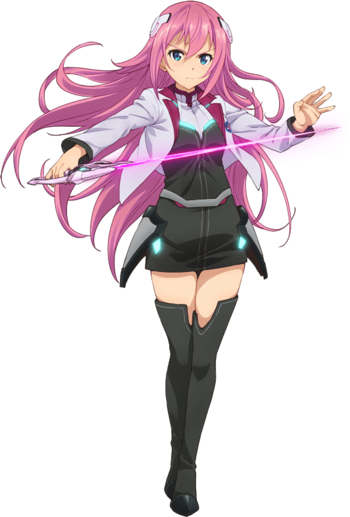 Julis-Alexia Marie Florentia Renate von Riessfeld is the fifth top-ranking student at Seidoukan Academy. She also serves as the Princess of Lieseltania, which is ruled by her brother, Jolbert von Riessfeld. She's a "Strega," which is a rare form of Genestella which has the ability to use actual magic abilities (most Genestella simply have advanced physical abilities and the ability to wield magical weapons). Her Strega abilities allow her to produce fire and explosions. She soon catches the eye of Ayato Amagiri and an interesting relationship blossoms between the two. 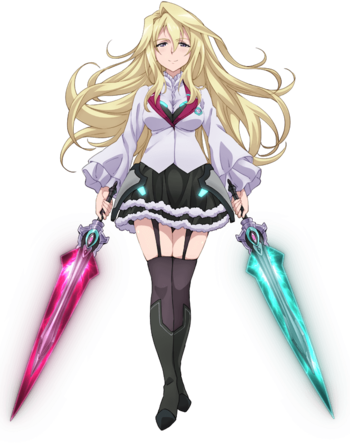 Claudia Enfield is the president of Seidoukan Academy's student council and the second top-ranking student at the academy. She's also the daughter of Galaxy's Nicolas and Isabella Enfield. After encountering Ayato Amagiri on his first day, she transfers him to the academy.

Saya Sasamiya is Ayato Amagiri's Childhood Friend. Although she does not compete in the rankings system, she considers herself to be on Julis Alexia von Riessfeld's fighting level. She prefers to use guns and cannons of her father's design and attends Seidoukan for the purpose of trying to popularize them. 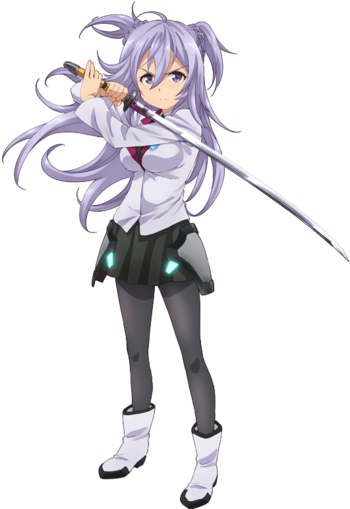 Kirin Toudou is a first-year student in Seidoukan's middle school section. At the start of the series, she is the top-ranking student at the Academy until Ayato defeats her. She's also the daughter of Seijiro and Kotoha Toudou, and niece of Kouichiro Toudou.

Eishiro Yabuki is Ayato's roommate. Well known as a member of the academy's newspaper club, he's also a member of Shadowstar, a secret police force run by the IEF.

Silas Norman is Lester's second lackey and an associate of Arlequint who hides his true identity as a Dante (the male form of a Strega, or a magician). He was hired by Arlequint to injure many of the top students, including Julis, so he can have an easier time to win the Phoenix Festa. He is eventually outsmarted by Ayato Amagiri and captured by Claudia Enfield.

Kyouko Yatsuzaki is the homeroom teacher of year 1 class 3 and a former student of Le Wolf. She's a Strega who led Le Wolf's only group to ever win the Gryps.

Haruka Amagiri is Ayato's older half-sister and a former student of Seidoukan Academy. She was the Ser-Veresta's first wielder. 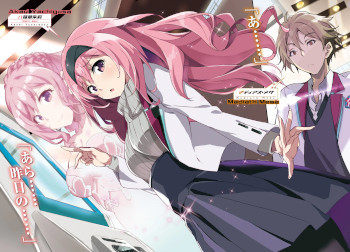 Left to right, Akari/Sakura as an adult, Akari as a student, and Madiath Mesa.
Sakura Amagiri, née Akari Yachigusa, was the mother of Haruka and Ayato, and a classmate, Festa partner, and eventual ex-wife of Madiath Mesa.
St. Galahadsworth Academy

St. Galahadsworth Academy is one of the six schools of Asterisk. It has a culture patterned after Chivalric Romance, prizing diligence, gallantry, and discipline, and along with Jie Long generally produces the best-ranked fighters in the city. Their governing IEF is Elliott-Pound.
In General
Ernest Fairclough 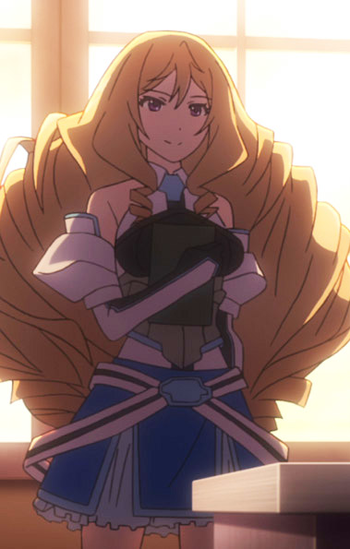 An up-and-coming fighter from St. Galahadsworth. Elliot, alongside Doroteo Lemus, faces off against Ayato and Julis in the Phoenix semifinals in volume 5, and returns leading a Galahadsworth team, Team Tristan, at the Gryps in volume 8.

One of Asterisk's middle-rated schools, formatted as a research university. Arlequint's student body is heavily factionalized, with student groups competing for research funding from their governing IEF, Frauenlob.
In General
Ernesta Kühne

AR-D is one of two puppets with A.I.s made by Ernesta. He represented Ernesta during the Phoenix. 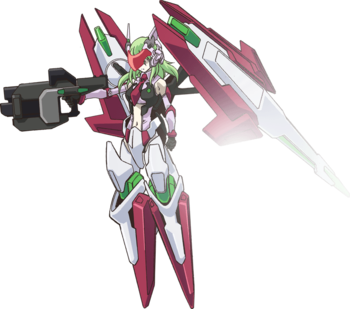 RM-C is one of two puppets with A.I.s made by Ernesta. She represented Camilla during the Phoenix.

Hilda Jane Rowlands is a researcher who "bought" Ophelia and experimented on her for the sake of making an artificial Strega.

The largest school at Asterisk and the only one to incorporate an elementary school, with a majority-Chinese student body. They're patterned largely after Buddhist monastic schools, with a strong focus on martial arts. Their governing IEF is also called Jie Long.
In General
Fan Xinglou 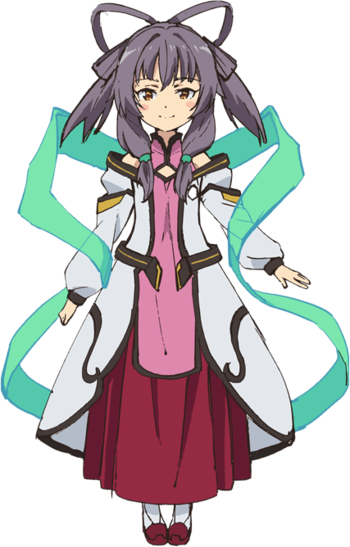 Fan Xinglou is the young president of the Jie Long Seventh Institute.

The "bad guy" school at Asterisk, with a Social Darwinist student culture that promotes duels between students and leads to significant disciplinary problems and higher-than-average dropout rates. They're good at the Lindvolus, not so much in the other Festas. They're governed by Solnage.
In General
Dirk Eberwein 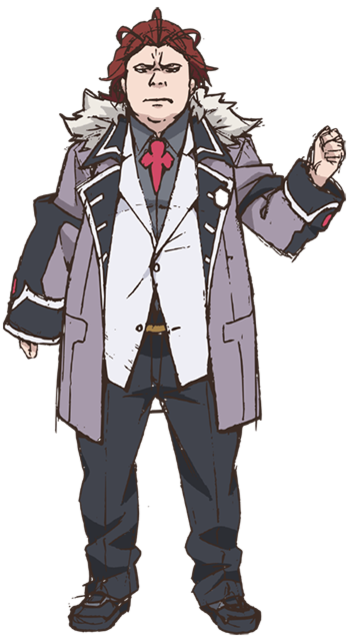 Dirk Eberwein is the president of Le Wolf's student council. A base-line human whose unprecedented rise to the top of a battle school for super humans is due to his ability to manipulate others behind the scenes.

Werner is a college student at Le Wolf, and a Ninja in Grimalkin, Le Wolf's spy unit. He's ranked seventh in the Gold Eyes unit and, in volume 5, kidnaps and detains Flora Klemm on Dirk Eberwein's orders. 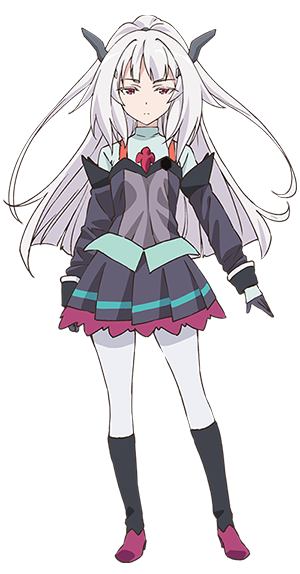 Voiced by: Maaya Sakamoto (Japanese), Ryan Bartley (English)
Ophelia Landlufen is the top-ranking student at Le Wolf. She was a childhood friend of Julis from the orphanage until she was taken away by Arlequint and experimented on to make her an artificial Strega.
Queenvale Girls' Academy

Asterisk's only all-female school, consistently at the bottom of the Festa rankings due to a combination of a smaller student body and a culture that emphasizes performance arts rather than fighting skill. Their governing IEF is W&W.
In General
Violet Weinberg

A haughty Queenvale student whom Kirin and Saya encounter while taking a vacation day in anime episode 8, at which time she's ranked 35th at her school. She has a larger role in the Wings of Queenvale Spin-Off series.

Sylvia Lyyneheym is the president of Queenvale's student council and an idol singer Strega. 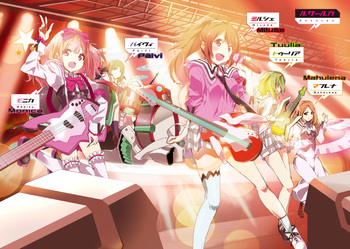 Left to right, Monica, Päivi, Miluše, Tuulia, Mahulena
A rock band made up of Queenvale students, rivals to Sylvia Lynneheym. They're introduced in volume 7 (past the end of the anime).

Helga Lindwall is the commander of Stjarnagarm, the Asterisk city police force. She's a former Festa champion believed to be the strongest Strega in history.
Integrated Enterprise Foundations
A group of six powerful megacorporations that arose following the Invertia event and now rule the world for profit: Galaxy, Elliott-Pound, Jie Long, Frauenlob, Solnage, and W&W.
In General
Kouichirou Toudou

Kouichirou is Kirin Toudou's uncle and trainer. He's a middle manager at Galaxy, the IEF that backs Seidoukan Academy, as well as being the seniormost teacher of Toudou-ryuu following the imprisonment of his brother, Kirin's father Seijirou, for a Crime of Self-Defense.

Madiath Mesa is a member of Galaxy, and the chairman of the Festa Executive Committee. He's also a former Festa Champion.

A Genestella Professional Killer, Gustave is dispatched by Nicholas Enfield to assassinate Julis to stop Claudia from participating in the Gryps Festa. He is a former student at Arlequint Academy. 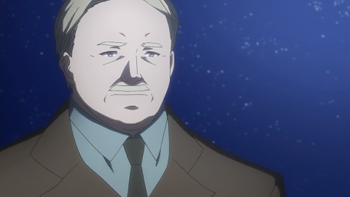 Nicholas Enfield is a British chief revenue officer assistant at Galaxy, the IEF that backs Seidoukan Academy. He's the father of Claudia Enfield and assistant to her mother Isabella, a fellow Galaxy executive.

Lieseltania
Located on the southeastern border of Germany, Lieseltania is a country ruled by the Riessfelds, specifically Jolbert von Riessfeld. Originally a territory of the Holy Roman Empire, its collapse caused it to become independent for the next 100 years. It was absorbed during the unification of Germany. After the Invertia, Solnage and Frauenlob fought over the rights to a Beltis asteroid, leading the IEFs to turn Lieseltania into a country.
In General
Jolbert von Riessfeld

Jolbert Murray Johannes Heinrich von Riessfeld is the King of Lieseltania and the older brother of Julis-Alexia von Riessfeld. He's a shameless layabout and puppet for the IEF that runs Lieseltania.

Flora Klemm is a girl Julis knew from the orphanage, now a maid at the palace.

A Nebulous Evil Organization responsible for much of the misery in the series.
In General
Known Members (Spoilers!)

Is a pseudonym for Madiath Mesa. See the Integrated Enterprise Foundation section.

A sapient Orga Lux created by Ladislav Bartošik. Varda-Vaos is able to mentally dominate humans and Body Surf between them.

Another Nebulous Evil Organization that debuts in volume 13.
In General