Unmarked spoilers ahead, read at your own risk! 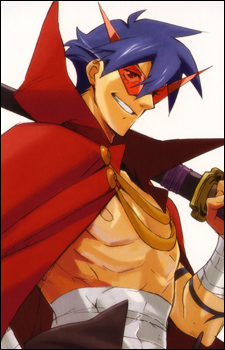 Voiced by: Katsuyuki Konishi (JP), Kyle Hebert (EN)
"WHO THE HELL DO YOU THINK I AM?!"

Simon's "big brother", a big-mouthed teen who refuses to acknowledge the words "quit" or "surrender" in any form. Through sheer bullheadedness, he manages to steal a mecha of his own (the Gurren) and use it and Simon's Lagann to challenge the rule of the oppressive Beastmen. Kamina is tragically killed early in the series, but not before kick-starting a revolution and inspiring Simon and all of those around him to realize their true potential. 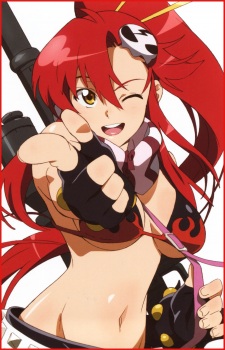 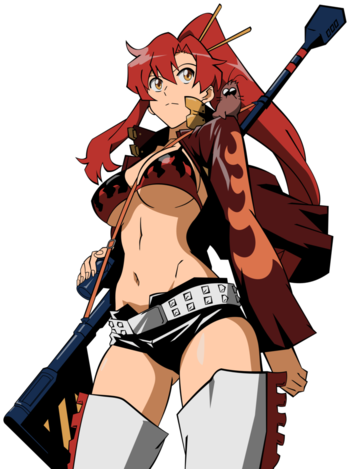 Voiced by: Marina Inoue (JP), Michelle Ruff (EN)
"It can be a real pain being as tough as I am!"

Bursting onto the scene in the first episode, Yoko Littner fills out the role of central female in the series. She hauls around a huge sniper rifle that can take down a Humongous Mecha in one shot, and dresses in a...er...interesting fashion. In spite of her apparent designation as walking fanservice, she gets some pretty good development as a character as well, going from a Fiery Redhead Tsundere to a strong, cheerful Cool Big Sis. 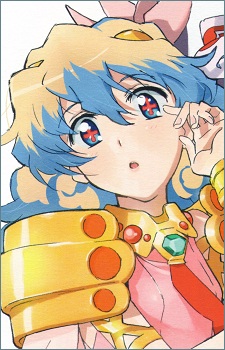 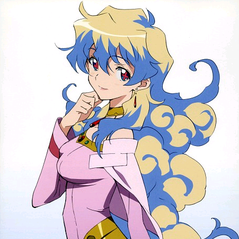 After a particularly traumatic event in his life, Simon stumbles across a box that the drill he recovered from the mines can open. When opened, out of it pops a young, naive girl with pastel blue and yellow hair: Nia. She turns out to be the daughter of Lordgenome, and is thus the princess of the Beastmen. She develops into Simon's Love Interest. 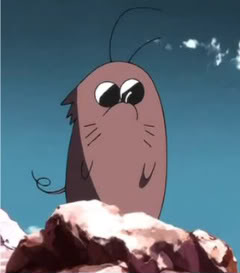 A palm-sized pigmole from the village that Simon and Kamina grew up in. He's Simon's beloved pet and companion on his travels, but does have a noticable love of riding in Yoko's cleavage. While he may be small, he's a motivating force for the team when push comes to shove. Later, it turns out Boota is a wellspring of Spiral Energy, and he even uses that power to imagine himself into a humanoid body—but only temporarily. 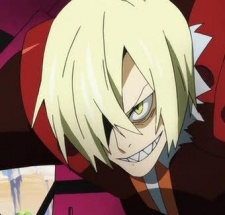 Voiced by: Nobuyuki Hiyama (JP), Sam Riegel (EN)
"I'll tell you two things: First, any human on the surface will be completely annihilated by our Human Eradication Army. Second, that is my dinner — give it back!"

Originally Vice Commander in the Human Annihilation Army, Eastern Unit, First District; Viral is the first real villain the heroes face in their quest to defeat the Beastmen. He develops an incredibly intense rivalry with Kamina almost immediately, which he later transfers to Simon. Initially appearing to be cruel and vicious, he gradually reveals himself to be a surprisingly noble man. 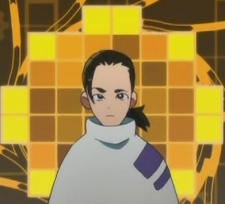 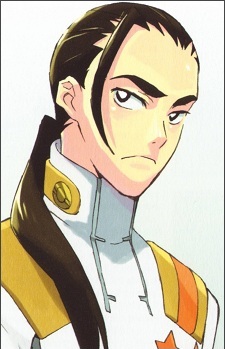 Click here to see him as an old man. 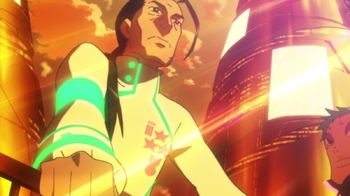 A boy from the underground village of Adai, which worshiped gunmen as gods. Due to the limited resources available to its people underground, Rossiu's village would hold raffles to exile some of its members after its population became too large to sustain. When Gimmy and Darry are chosen the leave the village, Rossiu decides to go with them in order to see the outside world, joining Team Gurren in the process. Rossiu has a curious and inquisitive nature, often as a result of being sheltered for most of his life by Father Magin in Addai Village, having listened to spiritual preachings that were meant to keep him at ease. His innocence begins to slip away over time, though. After some unfortunate events, he is forced to take Kamina's place as Gurren's pilot.

Following the aftermath of the battle and a time skip, Rossiu is now Simon's advisor as he runs the government in Kamina City. However, the arrival of the Anti-Spiral and the panic of the public turn him into a Well-Intentioned Extremist willing to sacrifice everything in order to preserve humanity.