While Team Fortress 1 and Team Fortress Classic have nowhere near as much characterization as their sequel, there is still enough to warrant a page detailing the Player Party.

Classic gave them more distinct appearances, unlike QuakeWorld Team Fortress, which uses placeholder models from Quake. Spy and Medic are the exception; their old outfits (gentleman spy and crazed surgeon) more closely resemble their substitutes in TF2. Most of them have canon names, as revealed in the tie-in comic, The Naked and the Dead. Medic does not appear in-person, but is briefly shown in a recap entitled Catch-Up. For their comic-related tropes, you should go here.

open/close all folders
The Scout (Greg) 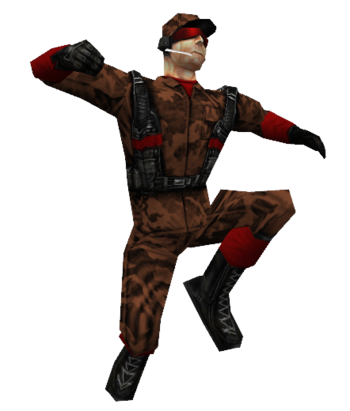 Identified by his radio headset and cap, the Scout is able to move at awesome speeds.
The Sniper (Virgil) 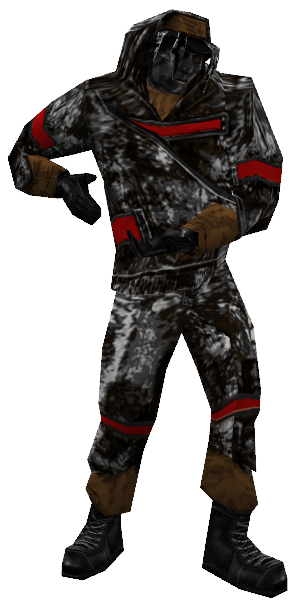 Identified by his mesh sniper veil, this rifleman is not to be trifled with. His role is to assist the team by picking off enemies from afar.
The Soldier (Ross) 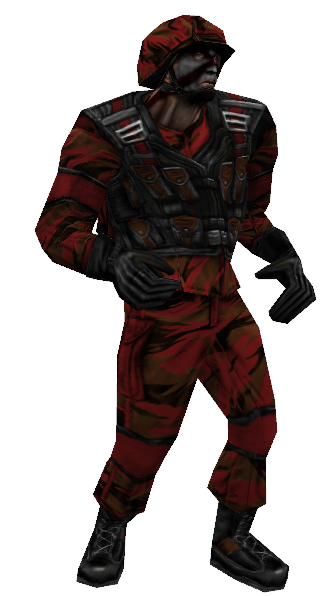 Identified by his camo face paint, the Soldier is a chameleon who changes tactics depending on the situation.
The Demoman (also named Greg)

Identified by his riot helmet with lowered visor, the Demoman is the emperor of explosives.

Identified by his Red Cross logo and breather mask, the Medic is a main source of healing.
The Heavy Weapons Guy

Identified by his bandana and lack of sleeves, the Heavy Weapons Guy (more commonly known as "the Heavy") spearheads the assault on enemy territory.
The Pyromaniac (Beatrice)

Identified by her (yes, her) opaque face-plate, Pyro is notoriously easy to kill. However, when used right, she becomes the queen of divide-and-conquer.
The Spy

Identified by his balaclava and laser eyepiece, the Spy is the thinking man's class—and everyone else's worst nightmare.
The Engineer (Fred Conagher)

Identified by his hardhat and overalls, this Gadgeteer Genius can fortify the team's base. 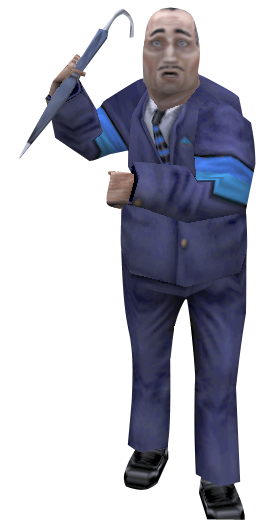 Identified by his business suit (and girth), the Civilian is a man with a price on his head and a target on his back.