This is a trope page describing the characters that appear in Talladega Nights: The Ballad of Ricky Bobby. 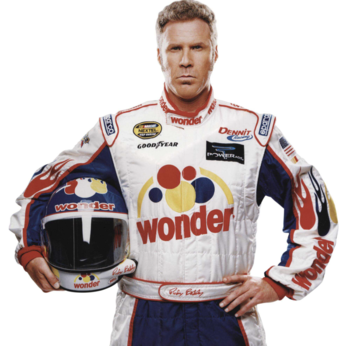 "Hang on, Baby Jesus! This got' get bumpy!"
"Well Dick, here's the deal: I'm the best there is, plain and simple. I mean, I wake up in the morning and I piss excellence, and nobody can hang with my stuff, you know? I'm just a big, hairy, American winning machine."
Played by Will Ferrell

Ricky Bobby, son of the speed-seeking Reese Bobby, is NASCAR's #1 driver. From humble pit crew beginnings, Ricky took the first opportunity he had to get on the track and never looked back, collecting fame, money, and a kickass reputation along the way. 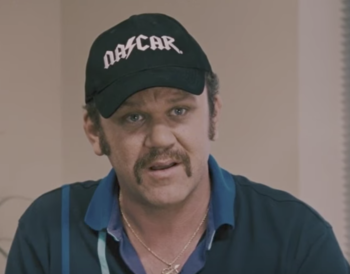 "Shake and bake!"
"I like to picture Jesus in a tuxedo T-shirt. 'Cause it says, like, I wanna be formal, but I’m here to party, too. I like to party, so I like my Jesus to party."
Played by John C. Reilly

Ricky's lifelong best friend, Cal Naughton, Jr. always dreamed of becoming a stock car racer alongside his buddy, and not long after Ricky's big break, his dream came true. When necessary, Cal uses his and Ricky's on-track dynamic to rocket his friend into first place through a process they call "Shake and Bake." 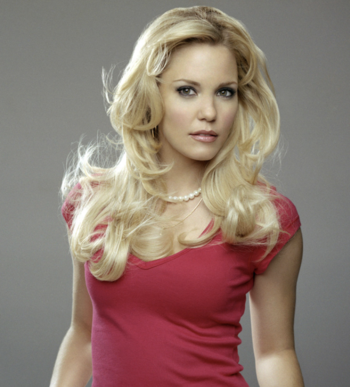 "Hey, um, you know, sweetie, Jesus did grow up. You don't always have to call him baby. It's a bit odd and off-putting to pray to a baby."
Played by Leslie Bibb

After flashing Ricky at one of his races, Carley Bobby became his beautiful trophy wife. Together, they brought up two sons, Walker and Texas Ranger, and let her father live with them in their enormous mansion. 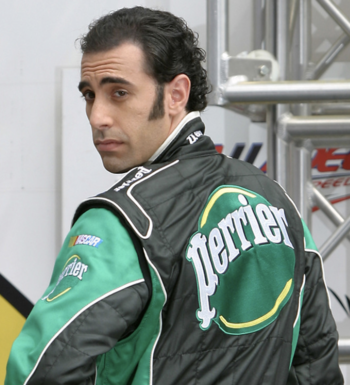 "Hakunah Matata, bitches!"
"I will battle you with the entirety of my heart, and you will probably lose, but maybe, just maybe, you might challenge me. God needs the Devil. The Beatles needed The Rolling Stones. Even Diane Sawyer needed Katie Couric. Will you be my...Katie Couric?"
Played by Sacha Baron Cohen

Jean Gerard is a sophisticated, homosexual French NASCAR driver who begins stealing the spotlight from Ricky with his clashing lifestyle and undeniable skill behind the wheel.

Reese Bobby
"You need to learn to drive with the fear, and there ain't nothin' more goddamn frightening than driving with a live cougar in the car."
Played by Gary Cole

Ricky Bobby's mischievous, deadbeat father who Ricky initially got into racing to impress despite his prolonged absence in his life.

Lucy Bobby
"When are you boys going to stop tossing me the radio in the bathtub?"
Played by Jane Lynch

Ricky's loving mother who knows how to run a house and whip children into shape.

Lucius Washington
"I don't wanna rain on your parade, but that was some of the dumbest driving I have ever seen in my life."
Played by Michael Clarke Duncan

Ricky Bobby's crew chief who supported his driver from his humble beginnings on the pit crew.

Ricky's assistant who takes a liking to him despite him barely noticing her existence.

Glenn Muncie
"Ricky, this car is like your Excalibur, the mighty sword King Arthur used to bring together the knights of the roundtable, until Lancelot betrayed him by laying with his queen... in the biblical sense."
Played by Jack McBrayer

Walker and Texas Ranger Bobby
Walker: Shut up, Chip, or I'll go ape shit on your ass!
Texas Ranger: I'm gonna scissor-kick you in the back of the head!
Played by Houston Tumlin (Walker) and Grayson Russell (Texas Ranger)

Ricky and Carlye's two delinquent sons who say whatever rowdy thing comes to their minds with no repercussions from their parents.