Characters / Tak and the Power of Juju 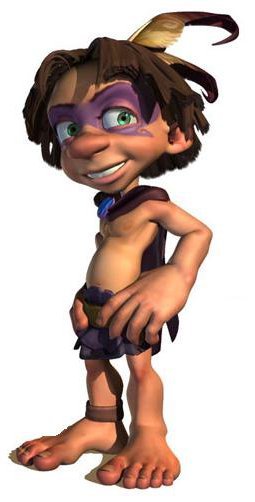 The main protagonist of the series, Tak is a young, often goofy, but ultimately good-hearted young mystic in training and member of the Pupununu People. When everyone in his village (barring himself and Jibolba, his mentor and shaman of the village) is transformed into sheep by the sinister shaman Tlaloc, Tak finds himself on a mission to prepare his fellow student Lok, the alleged Chosen One, for his inevitable confrontation against Tlaloc. But perhaps it is not truly Lok who is the mighty warrior who will save the village... 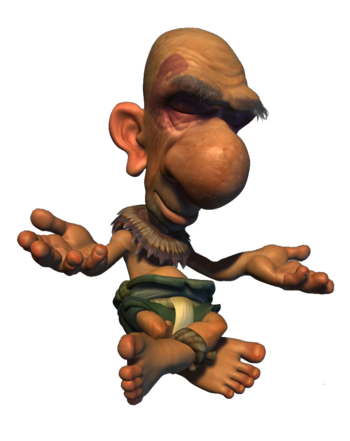 The respected and wise old shaman of the Pupununu village and the mentor of Tak and Lok. Even though Lok is his first apprentice, he has full trust in Tak, believing he has the potential to become a truly skilled mystic. Despite his old age, Jibolba is an extremely powerful shaman whose relationship with all the Juju gods is second to none.
Lok 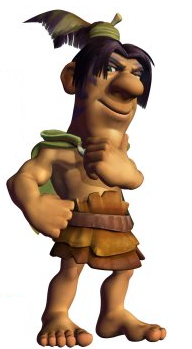 Lok is Jibolba's first apprentice who has been under the shaman's tutelage since he was very young. He is a gifted shaman and many believe he is the great warrior the prophecy speaks of, but, ever since Tlaloc's spell turned him into a sheep as well, Lok's abilities are useless since there's always something preventing him from actually doing anything.

After these events however, he does put his training as The Chosen One and is always willing to try and help Tak, even becoming a playable character in the third game.

In the Games In the Show
JB

JB is Jibolba's Brother (seriously, his name is literally "Jibolba's Brother") who lives in a large planetarium far away from the Pupanunu tribe and is an expert in both dreams and the Dream World. Tak and Jibolba seek his help in the second game in hopes of getting a better understanding of Tak's strange dreams since he has taken to studying them out in the desert canyons.

General
Spirits/gods of the world the games are set in, Jujus are typically summoned whenever some criteria is met, usually whenever someone uses an idol or magic to manifest them. They are quite the colorful characters who help Tak along in his adventure, sometime without even meaning to.
Moon Juju 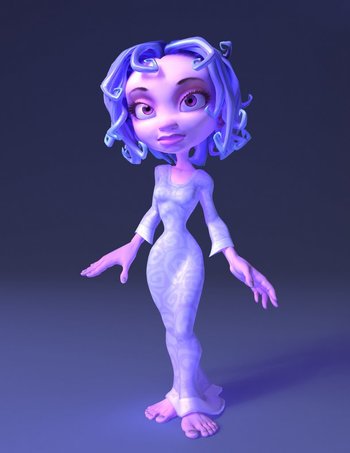 A benevolent beautiful goddess who protects the Pupanunu people. Tlaloc imprisons her after rising to power and Tak inevitably frees her as he runs errands for Jibulba and help revive Lok. 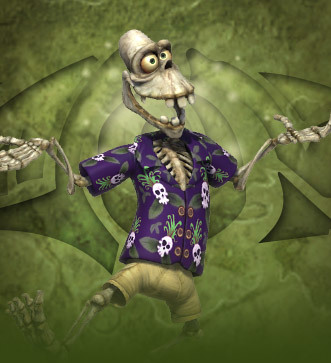 The Dead Juju is a skeleton Juju who loves parties. He hasn't seen a living person in 1,999 years, and as such is way too eager to make friends. 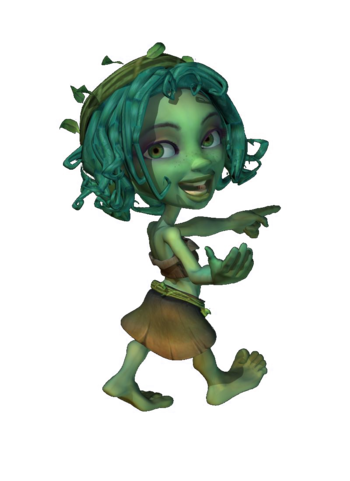 A young female Juju and one the Moon Juju's two daughters who helps Tak throughout his journey in the first game. 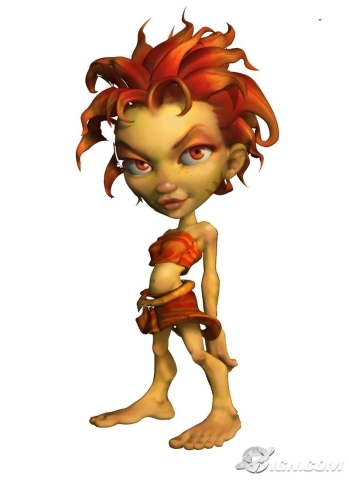 Moon Juju's other daughter and Flora's sister, a wild child with a prankish attitude and an affinity for animals. 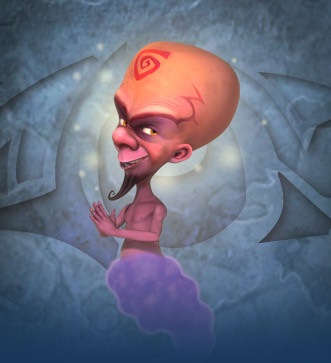 A spiritual genie-like Juju who claims that he can read minds. He speaks with an Indian accent. 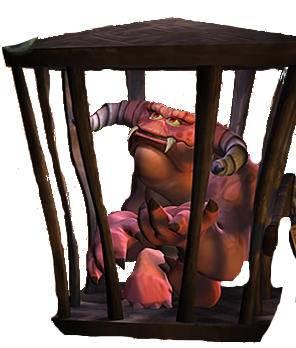 A sinister demon Juju who was caged for 10,000 years for an unknown crime. He is very aggressive and ambiguous. 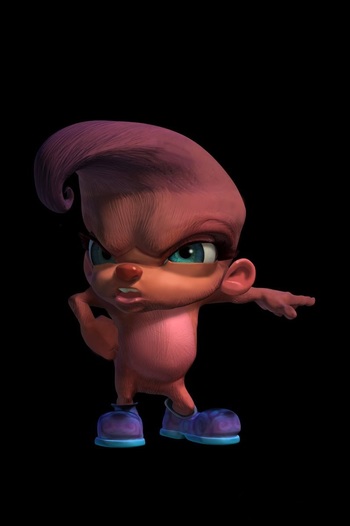 A Bratty Half-Pint juju who wants people to take him seriously and be in awe, but his young, adorable look gets awe at how cute he is which infuriates him 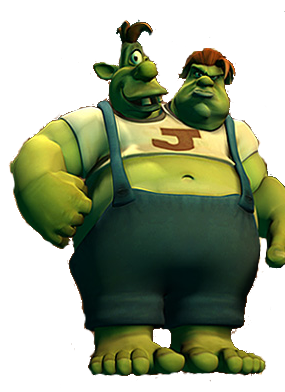 A dim, bloated, dirty green Juju with two constantly-arguing heads who gives Tak the power of the Chicken Suit by using outhouses. 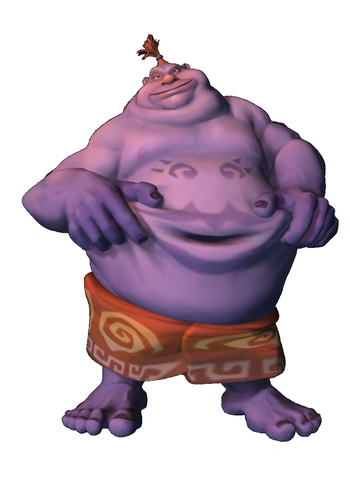 A fat Juju who literally lets his stomach do the talking. The belly part of him is actually the brains of the outfit, while the juju himself is a dumb nitwit. He sends Tak down the river in exchange for a ton of candy. 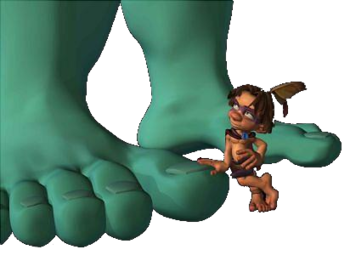 A gigantic Juju guarsian that, true to name, will not understand requests due to how tall he is. He summons Rick due to him mishearing Tak, and the guy helps the boy by telling him to say a nonsense sentence the giant mishears as Tak's actual request.

The Dream Juju is the Juju of the Dream World. He requests Tak of the Pupanunu people to go defeat the Dream Guardian, rescue the princess and use the Staff of Dreams. However, he is actually Tlaloc who wants to steal the Staff.

Tlaloc is the main villain of The Power Of Juju and The Staff of Dreams. Originally a fellow shaman and good friend of Jibolba, Tlaloc turned to evil after losing the coveted position of High Shaman of the Pupununu people to Jibolba. In an act of vengeful anger, Tlaloc steals the moonstones that give the Moon Juju her power and uses them to transform the Pupununu villagers into sheep. He is assisted by his two animated voodoo doll minions named Pins and Needles.

Tlaloc's two animated voodoo doll henchmen who do the majority of the grunt work for their creator. Pins is a stocky wiseguy while Needles is lean and snarky but has his mouth sewn shut. 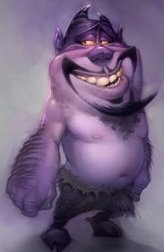 The Dark Juju Travis, an evil dark juju who impersonates a participant in the third game's challenges. He's the hidden main villain of The Great Juju Challenge. Like Tlaloc, he lusts for the Moon Juju.

Two shady members of the Black Mist tribe, a rival tribe to the Pupununu people, who face off against Tak and Look during the Great Juju Challenge. Bartog is a large, imposing-looking hooded warrior while Crug is a squat, ugly-looking shaman.
Stone Crusher and Thunder First
Jib and Jab
The Dream Guardian

A giant gargoyle-like dream creature that keeps a princess locked away in a tower.

The Nerbils are a race of ugly-looking creatures and are the main enemies in The Power of Juju. Despite appearances, they are vicous and tenacious hunters with a variety of abilities.

Vicious humanoid plants whose blooms, located in their mouths, are important magical ingredients. 12 of them exist as minibosses, and they have a variety of attacks.

The Woodies are a race of wooden people created by a shaman. They are the main enemies in The Staff Of Dreams.

Golem like beings made out of stones and held together by mana crystals. Tak and Lok encounter them while participating in the challenges of the third game.

Strange hostile creatures that inhabit dreams. They come in many varieties, and are generally more dangerous than the Woodies in the waking world.

Alternative Title(s): Tak 2 The Staff Of Dreams, Tak The Great Juju Challenge, Tak And The Guardians Of Gross