This page details the main protagonist himself, Kirito, in Sword Art Online. 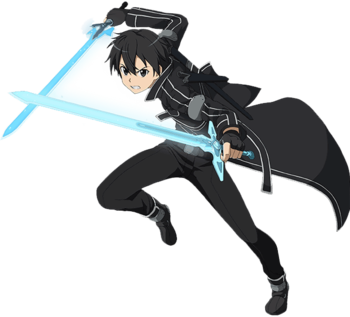 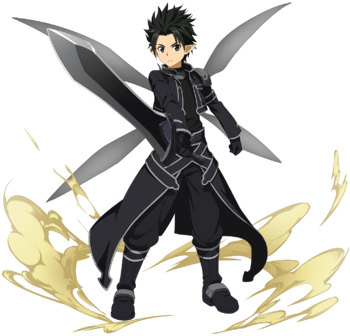 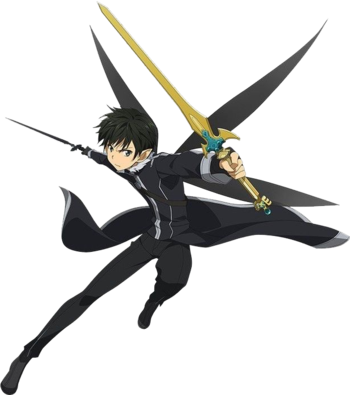 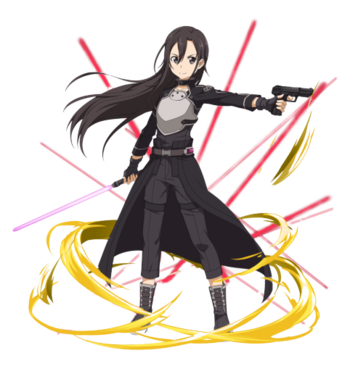 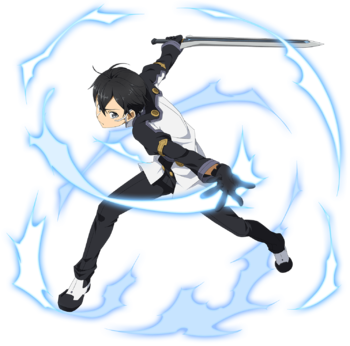 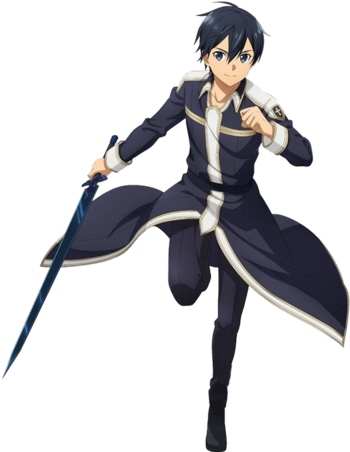 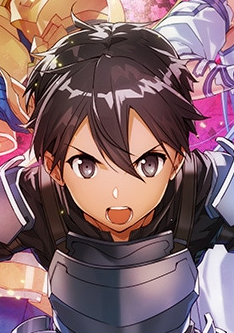 "I got this... I can do this! This world can't beat me! I will survive!"
Advertisement:

The Black Swordsman (no relation to the other one). The Beater. The Dual Wielding Demon. The Hero of Aincrad. The Gilded Hero. The Star King.

The overall Protagonist of Sword Art Online. Born Kazuto Narusaka to Yukito and Aoi Narusaka on October 7, 2008. His parents died in a car accident when he was a toddler, but was promptly adopted by his aunt. From a very young age, Kazuto developed an extraordinary ability with computers in general, and at age 10, he was able to hack into the Japan's National Registry, where he found out about his adoption. After this discovery, he started to distance himself from his family and started to compulsively play MMO-RPG games under the nickname "Kirito" as a mean of escapism.

At 14 years old, he gets to be a beta tester for the first Virtual Reality MMO-RPG ever created: "Sword Art Online". However, when the game is officially launched, he gets trapped inside of it along with the other 9999 players. Knowing how the game works thanks to his experience as an MMO player and beta tester, Kirito vows to survive in SAO no matter what.

However, due to his trust issues, he decides to make it as a solo player, rather than trying to socialize with other gamers. That changes temporarily when he joins a small guild called the Moonlit Black Cats, where he seems to manage to feel comfortable enough to start opening out to other people. However, Kirito decides to hide his true strength and his past as a Beta tester out of fear of alienating them, which later on indirectly gets his guild mates killed. Blaming himself for their death, Kirito decides even more strongly to write off relating to other players almost entirely for a long time.

Thanks to his extraordinary abilities as a gamer, though, Kirito becomes one of the strongest players in SAO, which gets him to be known as "The Black Swordsman". Eventually, he earns the Unique Skill "Dual Wielding", which allows him to equip a second sword in his off-hand.

Upon escaping from SAO, Kirito finds himself getting caught up in a lot of Virtual Reality related crimes from different MMO-RPGS, including Alfheim Online, Gun Gale Online, and Ordinal Scale. This would eventually lead to him being recruited by Rath as a tester for military VR equipment, where he was hired to dive into a virtual world known as the Underworld inhabited by Artificial Intelligence that are intended for military use. However due to an attack he ends up being trapped in this new world.