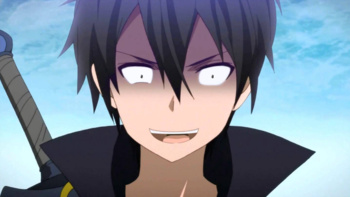 "There's no need to wonder where your god is, cause he's right here ...and he's fresh out of mercy."
Voiced by: YamatoSFX
Player: You're not better than us!
Kirito: My sweet-ass coat begs to differ.

The Hero of this series, or maybe it's better to call him the best player in SAO. This take on Kirito is an extremely snarky, sarcastic, and antisocial Jerkass with a low opinion of pretty much everybody who isn't him, though deep down he actually does care about others. It's just that it takes quite a bit to bring this out.
Advertisement:
Asuna Yuuki / Asuna / Titania 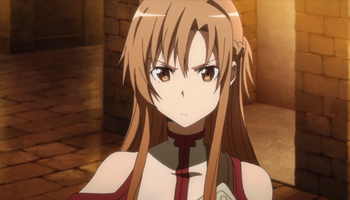 "Hey, at least I pretend to be nice to people!"
Voiced by: Misanda (Episode 2), xbubblemunkyx (all other appearances)

Asuna: You know what Mom says — doesn't matter if you're wrong, just dig in your heels, and never show weakness!

Kirito's main Love Interest, who rose from a gifted newbie to become a high-ranking member of the Knights of the Blood Oath able to match Kirito in stats and skill. She's something of a snarky jerk herself, with a temper to match, an occasional sociopathtic streak, and unintentionally racist tendencies, but unlike Kirito she's better at hiding it.
Klein / BallsDeep69 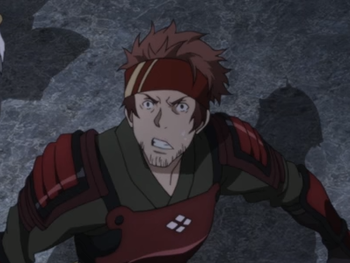 A player who has the unfortunate screen name of "BallsDeep69" and the even more unfortunate role of being Kirito's "friend."
Tiffany 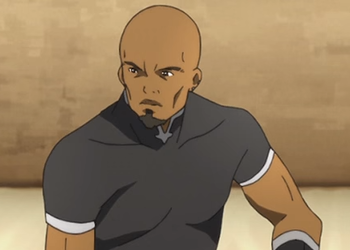 "Handin' the black man a murder weapon, a tale as old as time."
Voiced by: Jragoswinn (Episode 2), Octopimp (Episode 5+)
Kibaou: I don't know how to talk to you...
Tiffany: Good, then maybe you'll shut up and listen.

A black player who operates under a girl's name for reasons unknown. He initially wanted to help his fellow players get out of the game, but upon realizing just how stupid they are, he became a vendor selling overpriced and faulty weapons to the idiots.
Silica 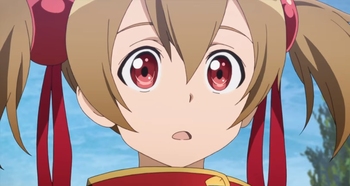 "Don't take this the wrong way Mr. Kirito, I'm grateful for your help, but you're like the worst person I've ever met."
Voiced by: Rachel Michelle

A young newbie who develops a crush on Kirito after he saves her life. Once she gets to really know him, however, she just can't wait to be rid of him.
Lizbeth 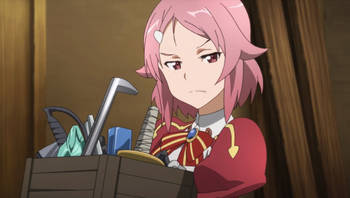 A friend of Asuna's and a master blacksmith. Lizbeth hides away in her shop due to an incident in her past, but a misadventure with Kirito puts an end to that.
Advertisement:
Yui 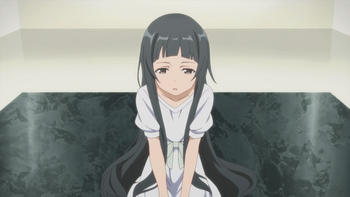 "I know you only kept me around as a pawn for your mind games. Although, I do admit... I did enjoy being your pawn..."
Voiced By: redasatomato

A mysterious girl who shows up during Kirito and Asuna's "honeymoon" and ends up being adopted by them as part of their game of matrimonial chicken. There's more to her than meets the eye, however.
Heathcliff 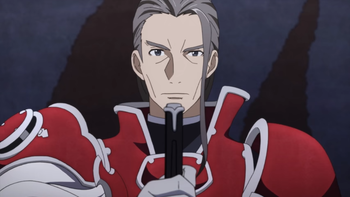 "Truly, you are the voice of a generation."
Voiced by: Takahata101

The Commander of the Knights of the Blood Oath and de facto leader of the effort to clear Sword Art Online. He's arguably the most competent and sanest of the players in the game, tendency to make obscure references aside.

One of the most feared orange guilds on the lower floors. 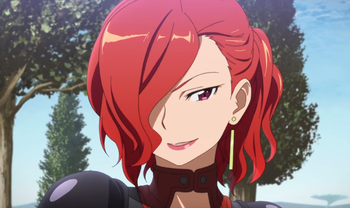 "And to top it all off you play the tough guy, this invincible warrior you can never hope to be in the real world. Getting stuck in this game was probably the best thing to ever happen to you."
Voiced by: puccagarukiss

The leader of Titan's Hand. Stupider than she looks.

Black Cats of the Full Moon / The Crew

A guild that Kirito got roped into joining, consisting of Keita, Sachi, and three NPCs from quests Keita never finished. Unlike in the original series, here they are usually called "The Crew". 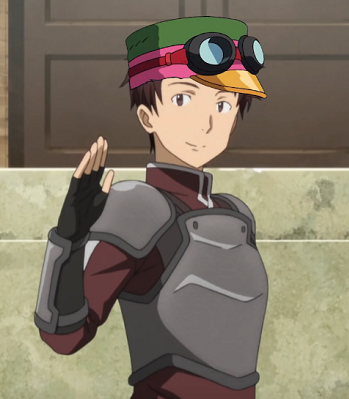 "And what if I put on this hat?"
Voiced by: Spritestuff

The glitch-exploiting leader of the Crew, who controls Kirito with his Charisma +50 hat. 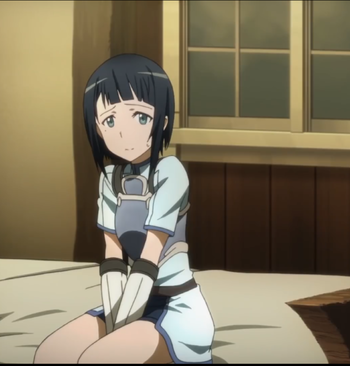 The only human member of the Crew aside from Keita (and later Kirito), and also the nicest person there. She lives out in the boonies and has a terrible internet connection, resulting in random lagging. 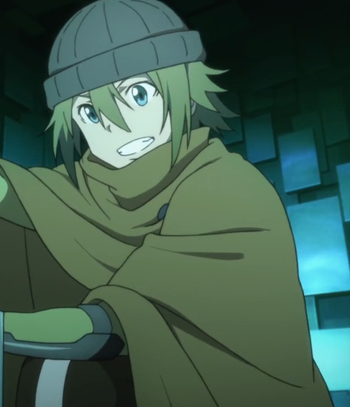 "We must save my family!"
Voiced by: AtomicVoice

An NPC from one of Sword Art Online's quests, kidnapped by Keita to be a guild member.

The tutorial NPC, who Keita kidnapped, leaving the rest of the playerbase unable to get the most basic instructions on how to play the game.

A guild that attempted to avoid some Loot Drama by selling a valuable item instead of fighting over it, only for the guild leader to be murdered on the way to the market, leading the group to collapse into suspicion over who did the deed.

A witness to an alleged murder in a safe zone who draws Kirito and Asuna into the mystery that destroyed her guild, because...?

A former Golden Apple member trying to figure out who destroyed his guild, in a fairly roundabout manner.

A game reviewer in the real world, now a nervous wreck because he's terrified that some of his commenters will find him and make good on their creative death threats.

A member of the Golden Apple guild, married to another player, Griselda.

The former leader of the guild Golden Apple, whose ghost is purportedly seeking vengeance on her murderer.
Laughing Coffin

A deranged group of PKers-for-hire feared throughout SAO, though they're having trouble attracting clients due to a branding problem.

Laughing Coffin's leader and one of Aincrad's most dangerous assassins. He's better at some parts of his job than others.

Jeffrey's long-suffering lieutenant, and not at all a fan of Piece of Schmitt Games.
Aincrad Liberation Front

One of the guilds trying to clear Sword Art Online, and for the most part, failing at it.

A loudmouth and conspiracy theorist who hijacks a strategy session early in the game and causes more trouble later.

A self-proclaimed master strategist, who has never failed to defeat a floor boss. Or succeeded in defeating a floor boss.

The very, very loyal lieutenant of the ALF's former leader.

The ALF's deposed leader, who by the time we meet him has been reduced to crying while huddled in the fetal position at the bottom of a dangerous dungeon.
Knights of the Blood Oath

The top guild in Sword Art Online, of which Asuna and Kirito become members, and the leaders of the effort to clear the game.

Asuna's bodyguard, who moonlights as a clingy stalker.

A senior member of the Knights of the Blood Oath, who puts Kirito through some team-building exercises that are ultimately unsuccessful. 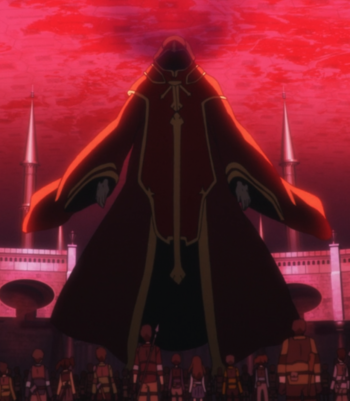 The main antagonist of SAO Abridged's Aincrad arc. Posing as the leader of the Knights of the Blood Oath, Kayaba ends up trapping the entire playerbase in Sword Art Online due to sleep deprevation in order to make the game's deadline and events just snowballing out of control from there. 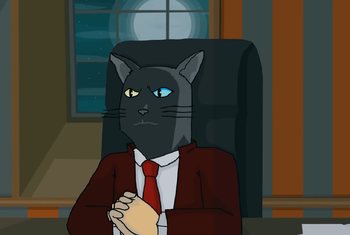 A cat that somehow learned how to play SAO. And somehow started the game's mafia. And somehow ended up on the KoB's senior council, only to betray them and rule alongside the King of Ashes over the ruins of Floor 75. 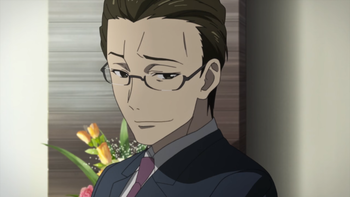 "The thing is, it doesn't matter how sharp your tongue is... because this little lollipop... belongs to me now."
Voiced By: KaiserNeko

Asuna's prospective husband, thanks to her father marrying them off.

A woman who runs SAO's orphanage, looking after the game's youngest players. At least until Kirito and Asuna show up and try to take it over.
"The King of Ashes"
Voiced By: BuddyVA

A player who, upon being disappointed by the Curb-Stomp Battle of Heathcliff vs Kirito, led a riot which burned down Floor 75 and set himself up as the ruler of the tribal society that was established after him and his acolytes ran out of things to burn down.
Diabel
Voiced by: TehExorcist

A player who tried to lead others in clearing SAO, but lost the will to live in the process.
Assorted SAO Players

SAO's playerbase, forced to fight for their lives in a game they can no longer log out of. Or as Kirito puts it, "a bunch of mouth-breathing neckbeards who think 'LMAO' is how French people laugh." 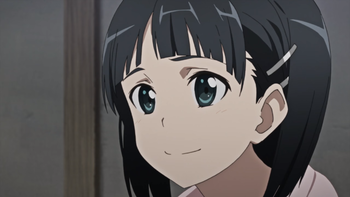 "Hey, all I know is you leave the house for hours at a time and then come home crying. You know, like bitches do."
Voiced by: Lennon Drake 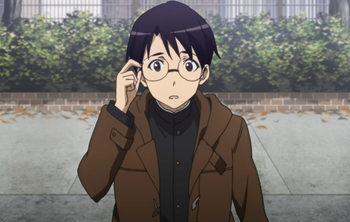 "So, where are you guys off to? Going on a que... (ahem)
You guys going on a mission?"
Voiced by: MrBuddyVA

A Sylph player who quests with Leafa in ALfheim Online, and "quests" with Suguha in real life. 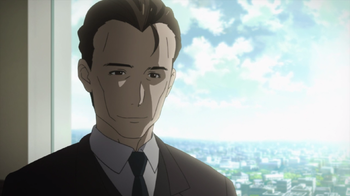 "It's good of you to keep visiting her like this. Like a watchful guardian looking after a slumbering princess. Lying there like a perfect, beautiful little parasite, SUCKING THE MARROW FROM MY VERY BONES! ."
Voiced by: Logan "BlazingAzureCrow" Laidlaw

Asuna's father and the CEO of a major company.
The Math Tree 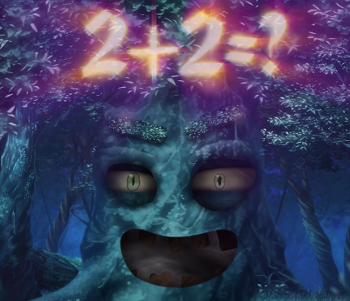 An NPC, in the form of a creepy-looking tree, that challenges players to answer deviously perplexing math problems.
Assorted ALO Players

The players of ALfheim Online, who have taken what is ostensibly a children's game and made it their own.