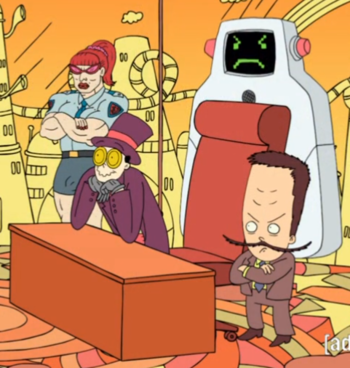 From left to right: Alice, The Warden, Jailbot, and Jared.note Not pictured: The Doctor
The jail's staff. They oversee the controlled chaos and try to keep everything in check. 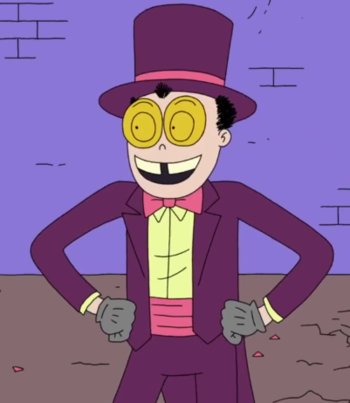 The founder of the titular prison, the Warden is an eccentric, twisted Willy Wonka expy that has a flair for the dramatic. Although very childish on first glance, the Warden actually seems to be quite brilliant, considering he built the prison almost singlehandedly, along with all of the wild, wacky, overly complicated contraptions inside. 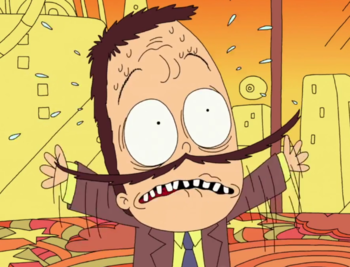 The Warden's vertically challenged, neurotic, formerly alcoholic assistant. Actually, he seems to be a recovering offender of just about every addiction known to man, including smoking, drinking, sex, gambling, drugs, and more. Interestingly enough, Jared first arrived in the prison as an inmate, after formerly working for the Mafia. 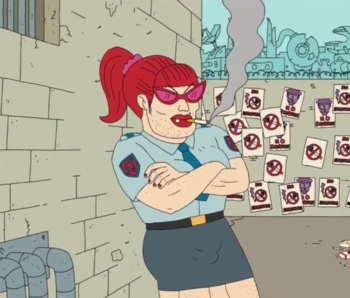 The muscular, transsexual prison guard. The Warden has a crush on her, though regulations prevent them from dating... not that Alice would want to, anyway. 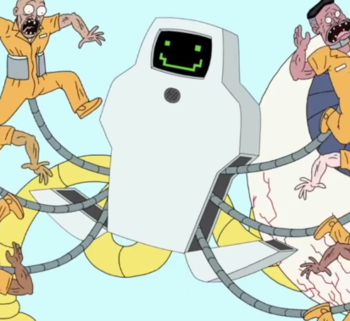 The jail's Do-Anything Robot. He usually starts the episode off by capturing Jacknife. 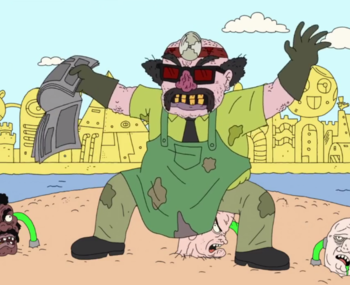 A Mad Scientist with a German accent, he is in charge of Superjail's scientific and technological advancements (mostly horrifying hybrids). He gets a much more prominent role in Season 2.

Lunch Ladies (Janice, Cookie, and others)
Voiced by: Stephen Warbrick

A group of cafeteria workers that are among the minor staff. They're obsessed with using anything and everything in their recipes, even unlucky humans that may cross their path.

Inmates (as a whole)
Jacknife 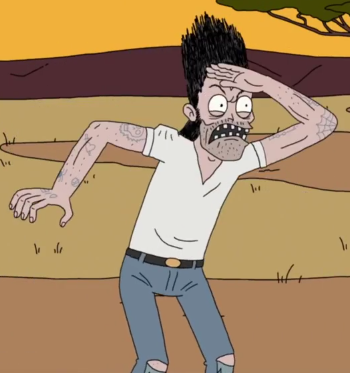 The repeat offender criminal who almost always gets sent to Superjail for some crime he committed or chaos he caused note (almost always being the operative phrase here, as one episode had Jailbot accidentally take a serial killer back who was using Jacknife's face as a mask while Jacknife was chained to the wall, the season one finale where Superjail is shut down had Jacknife go to a real-world prison after trying to rob a bank, and the episode where Jailbot malfunctions had Jailbot actually take Jacknife out of Superjail and put him on the streets). 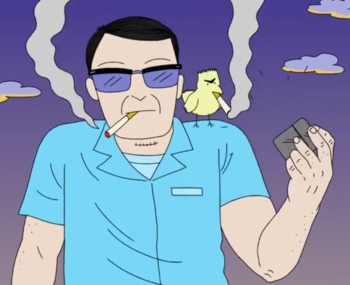 A bespectacled inmate and his bird. Or alternatively, a super-intelligent bird and his handler. The two of them are said to be at the top of the inmate food chain, with Bird being especially dangerous note This was evident in their season 1 Adult Swim profile where they were listed as "Bird and Gary", and it indicating that Bird was the boss of the two. Later seasons seem to indicate Gary being more in control. 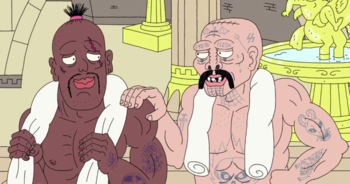 A recurring gay couple seen at the jail, and known initially as simply "The Gay Inmates" or "The Gays" (although the latter term is still used to describe them as a duo, such as in "Superjail! Grand Prix"). Paul is the more talkative and flamboyant of the two, while Jean tends to speak less and act more gruff. 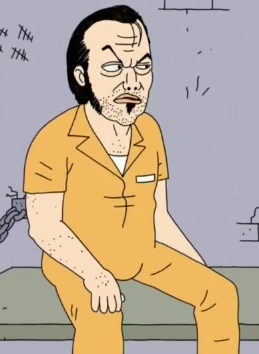 Voiced by: Chris McCulloch
A soul-patched inmate with a New York accent. Seems to be a leader among the various inmates.
Ash 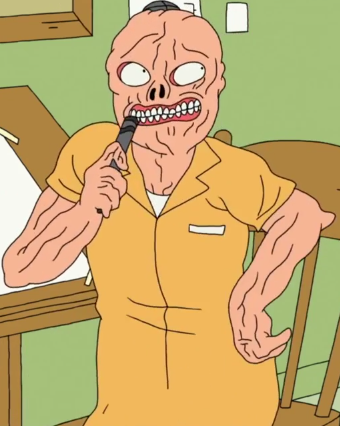 An inmate who has extensive burns all over his body. 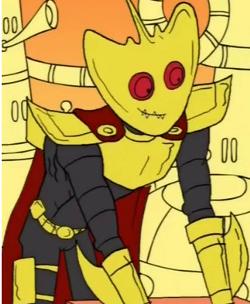 A supervillain who wound up stranded at the Superjail island after his headquarters was destroyed. He attempted to take over the jail, but was foiled and imprisoned as an inmate as punishment. He'll do all he can to try to upstage the Warden. 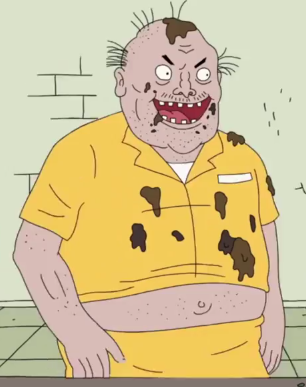 A fat, lecherous inmate with a high voice. Gets killed a lot. 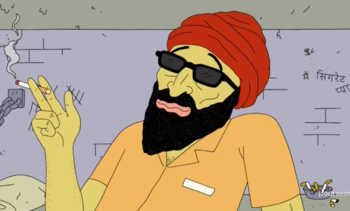 A Middle-Eastern inmate seen among the recurring batch. 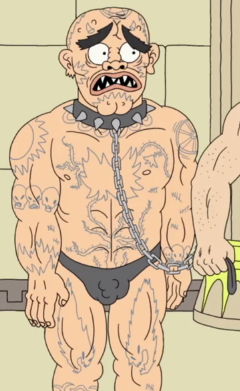 Alice's "boyfriend"- or more accurately, a particular inmate that she's been obsessed with since the events of "Superbar". He's often her unwilling slave and tormented by her. 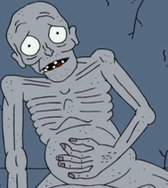 A severely emaciated, gray-skinned inmate that's constantly starving. He can't get much of a break.

A group of inmates that were disfigured through various accidents at the jail. They're first mentioned by Jean in "Sticky Discharge" and later appear in their own spotlight episode. 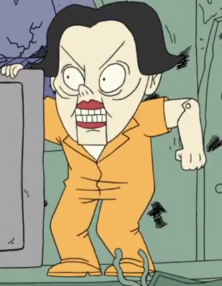 A ventriloquist's dummy that was used by the Warden for his magic act. However, the dummy soon seems to take a mind of his own with a little bit of help from Gary and Bird. Was also formerly The Rat.

Monster Convict
A serial killer who loves to fashion his victim's skin into furniture. He was mistaken to be Jacknife by Jailbot. Dreaded over the inmates, making The Warden jealous.
Bobo
An inmate who grew to a giant thanks to the Warden's growth serum. 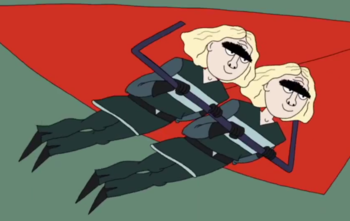 Creepy Twins whose sole purpose appears to be to cause as much havoc as possible inside the jail for their own amusement, sabotaging everything the Warden cooks up. note While some episodes and interviews treat them as a separate division entirely from the staff or inmates, Christy Karacas has also at times lumped them in with the inmates and had them described as such in the Playboy tie-in comic (which was produced before season 3). In the pre-production stages of the show, their inmate status was more definitive.

Superjail's vegetable garden is full of sentient veggies just wanting to be loved and eaten. But they're prone to jealousy and paranoia, as well as dying all too easily.

Combaticus
Voiced by: Richard Mather note For the line of the constellation Combaticus at the end, at least

A genetically-engineered superhuman clone of the Twins, who had amazing super-strength and agility. 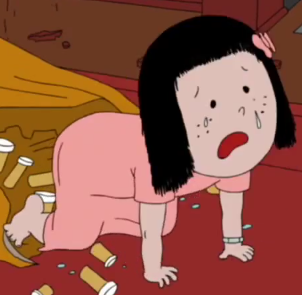 Click here to see here appearance from season 2 and onward 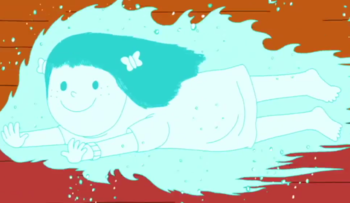 A four-year-old who gets accidentally taken to Superjail. Her name is Cancer because the inmates of Superjail mistake the word "CANCER" on her bracelet for her name. Once she passed away, her ghost resides around the jail.

Sunshine
A weather-controlling robot that the Warden invented to cheat in a three-legged race.
Space Fungus 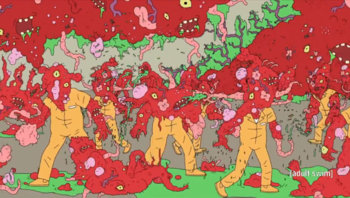 "Someone pee-peed in the humans' gene pool."
A strange alien fungus that displays human features. The Twins introduce it to Jailbot as his lover and it begins to infect everyone across the compound.
The World's Strongest Cockroach
A science experiment created by the Gay Couple. Quite literally becomes the world's strongest cockroach when it accidentally ingests a bit of The Warden's growth serum.