The characters of Sunday Without God. Several of the characters are Walking Spoilers to some degree, so there may be unmarked spoilers below.

The protagonist. She is the twelve-year-old gravekeeper of her little village, having been given the role when her mother Alfa passed away. Her peaceful life is torn apart when a man named Hampnie Hambart comes to her village and massacres everyone but her. After confronting him, she follows him, believing he knows something about the truth of her village that he isn't telling her. When she learns the whole truth and comes to terms with the loss of her home, she declares her desire to save the world God has abandoned.

An immortal gunslinger known as "The Man-Eating Toy," and the one who slaughters Ai's village. Since he knows more about her village than he lets on, Ai follows him, hoping to learn the truth. She also believes him to be her long-lost father, which he denies. He is searching for a woman named Hana.

A true gravekeeper. She is polite and always smiling, but she has no emotions and her only role is to bury the dead. She joins Ai on her journey.

Hampnie's childhood friend. He was happily married with a wife and a daughter, but seven years prior to the start of the series, his wife died of an illness, and he hid her from the gravekeepers for a year until Hampnie found them and destroyed her body. A month before the series, his daughter also died of an illness, and after a gravekeeper buried her, Julie decided to hunt down Hampnie for revenge. However, because he knows of Hampnie's immortality, Hampnie deduces that what Julie truly desires is to be killed by him. Julie later joins Ai on her quest to save the world, acting as her guardian and protector.

A mysterious boy Ai meets while at Goran Academy. Together with Dee, he is also traveling the world, and believing that he and Ai are similar, he asks for her help. However, his definition of "saving the world" seems to be different from hers. His special ability is "Buzzer Beater," allowing him to hit any target he aims for.

A ghostly girl Ai meets while at Goran Academy and Alice's traveling companion. She is known as "Whisper" and the "Witch of the West," and she can secretly whisper suggestions and commands to people, compelling them toward certain actions. In fact, she did this once to Ai so that she would head to Goran Academy's clocktower to meet Alice, and she claims the three of them were destined to meet.

Ai's mother and the first gravekeeper. She passed away a few years before the series begins.

A government official from Ortus, the city of the dead. Ai and the others first meet him after he was drugged and left for dead by bandits, and he invites them into Ortus. He is also the tutor to Ulla, the princess of Ortus. He believes she will be the one to save the world. 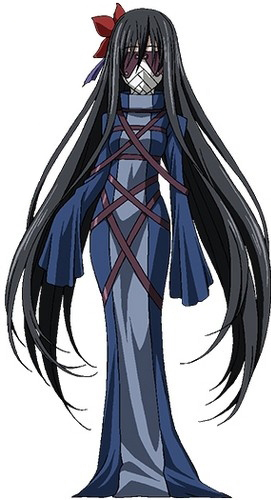 The princess of Ortus. When Kiriko introduces her to Ai, they quickly become close friends. She is often seen in long robes with her face completely covered, and she communicates through Kiriko and writing.