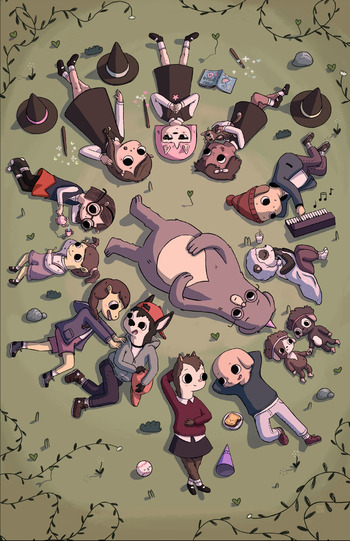 While there are other campers on the island, the show focuses mostly on these campers due to them being friends with Oscar and Hedgehog.
Max

A laid back bat and general cool guy. He sometimes hangs out with Oscar and Hedgehog.

The older sister of Lem.

The younger sister of Alexa.

Voiced by: Charlyne Yi
The second nicest of the witches, with an addiction to all things cute.
Betsy Spellman 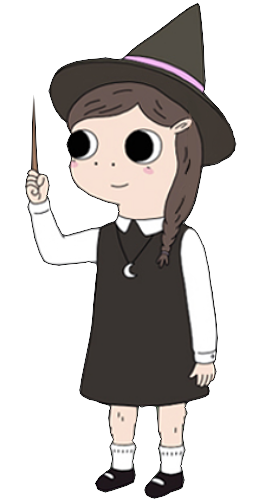 Voiced by: Nikki Castillo
The nicest of the witches, and only one the campers can stand.
Susie: You know, sometimes I really hate you, Betsy...

In General
The resident monsters of the island. Who despite appearances are all swell guys and gals.
Howard

A tall, purple monster who wears glasses and has a single pink horn.

A tall, white monster with black spots and black ears and a snout.

A tall, brown monster who has a door in front of her body.

A medium-sized, purple monster with wings.

In General
Elves that lives on the island outside the summer camp.
Barb Goldberg
Voiced by: Whoopi Goldberg

The head of the elves who runs the Soundhouse on the island.

Oscar's pajamas that comes to life when she's on Summer Camp Island.

The Sun and Moon
The Sun voiced by: Melanie Lynskey
The Moon voiced by: Cedric The Entertainer

A living sun and moon that can only talk when they're at Summer Camp Island.

Furry aliens that serve as assistants to the witches and the campers. Some notable aliens are the King and Puddles from "Feeling Spacey".

Yetis that appear on the island.

A strange translucent monster that lives under the bed in Hedgehog's cabin.

A shark who lives in the pool by Oscar's cabin.