Please note: Given the nature of the series, beware of unmarked spoilers including death tropes on this page.
open/close all folders
Willem Kmetsch

The last human alive, and officially one of the caretakers of the weapons storehouse. He develops a life similar to that of 500 years ago, caring for children, before realizing that the children are weapons. He strives to prevent the deaths of the children by teaching them the correct way of using their dug weapons.

The first leprechaun Willem meets, and the main female character for the first half of the story.

A troll who is the other caretaker at the Fairy Warehouse. She seems to love the idea of eating Willem.

One of the older fairies at the Fairy Warehouse. She is partnered with the Dug Weapon,'Valgulious.'

Voiced by: Akari Uehara (Japanese), Alexis Tipton (English)
One of the older fairies at the Fairy Warehouse. She was partnered with the Dug Weapon,'Insania.'

A young purple-haired Leprechaun and the second one Willem meets. She is a minor character at first, but becomes one of the main characters in Suka Moka.

Voiced by: Tomomi Mizuma (Japanese), Lara Woodhull (English)
A young green-haired Leprechaun who lives at the Fairy Warehouse. She is a minor character in Suka Suka, but becomes one of the main characters in Suka Moka

Voiced by: Hina Kino (Japanese), Kristi Rothrock (English)
A young pink-haired Leprechaun who lives at the Fairy Warehouse. She is a minor character at first, but becomes one of the main characters in Suka Moka.

Voiced by: Manaka Ishimi (Japanese), Jill Harris (English)
A young orange-haired Leprechaun who lives at the Fairy Warehouse. She is a minor character at first, but becomes one of the main characters in Suka Moka.
Island 38

An ambitious young Imp serving as a 4th Grade Officer in the 5th Division of the Guardian Wings Military.

Feodor’s friend and fellow soldier from the 5th Divison.

A fairy who died in a civil war 30 years before Suka Moka.

A Regal Brave, former wielder of Seniorious, who worked with Willem in the past.

One of the braves who worked with Willem in the past. 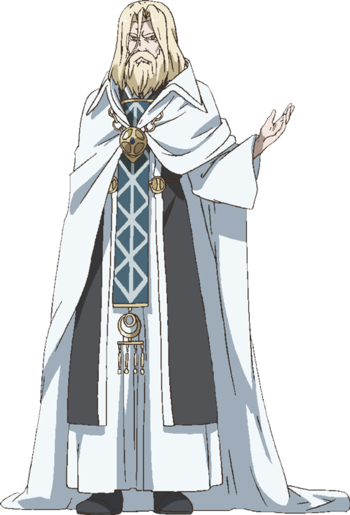 A skilled magician who fought alongside Willem 500 years ago, Souwong fought and lost against a visitor, but cast a spell on himself before dying, preventing his death. When the beasts emerged, he led the survivors onto the flying islands.

Visitors
Literal visitors to the world, who could not find their way back to their homes. As they were immortal and could not die unless in their homeland, most of them broke their souls to live on the land without harming other inhabitants.

The last of the visitors, a young redheaded child who remained in a barrier and was protected by three guardians.

One of the guardians who protect Elq, Ebo was defeated by Willem many years ago. As a result of his injuries, his reincarnation is incomplete, and he now takes the form of a talking skull.

The second of the three guardians who protected Elq.

The last of the guardians who protected Elq. Shaped like a fish, she later attached herself to Nephren.
Other Characters

A Goblin friend of Willem who gets him the job of Weapons caretaker.

The Lizardfolk in charge of the Leprechauns. Well-respected by other soldiers.

The rabbitfolk who arranges for Willem Kmetsch to meet with the Great Sage, Souwong Kandel. He is also a member of the Guardian Wings Military Police.

A Lycanthrope and an inhabitant of island 58.

The caretaker of the orphanage Willem and Almaria lived in who also happened to be Willem and Lillia's teacher in the Arts that turned them into the skilled Braves they were known as when the Emnetwihts were still around.

One of the oldest children of the orphanage Willem comes from, who made a promise with Willem to wait for his return.

A level 8 Adventurer from Gomag and Willem's self-described "friend".

A young girl from an aristocratic family who is engaged to Feodor Jessman.

The 17 Beasts (HEAVY SPOILERS!)
The 17 Beasts who ravaged the surface lands and drove the surviving species to the Floating Islands Règles Aile after the Emnetwihts' extinction. They continue to dwell in the surface lands and constantly terrorize any and all who attempt to explore what remained of the surface. Noteworthy here is that the "17" in their collective name doesn't refer to them being only seventeen in number, but to the fact that there are 17 types of Beasts out there, all of whom are massive in sizes and shapes.

Aurora: The Second Beast Who Pierces Through

Legitimitate: The Fourth Beast Who Twists As Its Swallows

Materno: The Fifth Beast Who Spreads Out Widely