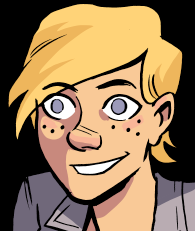 Our titular strong female protagonist. She was once Mega-Girl, the most powerful biodynamic on the planet, until she became disillusioned with the superhero business and retired by revealing her identity live on national television.
Patrick Andrews / Menace

A mind-reader who used to be supervillain with an eye for world domination. Called it quits when he realized there was an even bigger conspiracy at work and set out to find it. Runs Templar Industries in secret. 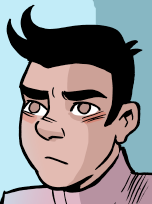 Former leader of the Guardians. Has the power to shrink to a sub-atomic level.

Former member of the Guardians. Has the ability to bend light to make herself invisible or cast illusions.

Former member of the guardians. Has super sonar and enhanced hearing.

A technological genius who used to fight crime in a mech suit of her own design, now the newest professor at the New School. She wants to make a sentient AI. 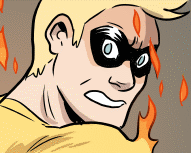 Literal hothead who is completely sure he's a superhero, despite leaving a trail of destruction in his wake.

Professor Arjun Gurwara
Axiology teacher at the New School. He's got beef with Alison.
Max Prescott
A man Alison rescues from a burning building, and then goes on a date with.
Clevin O'Toole 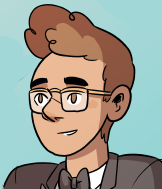 A guy Alison dates after Max.

Enthusiastic film buff and musician with a sense of fashion you either love or hate. A cheerful guy despite having had his share of run-ins with biodynamic danger.