The cast of the webcomic String Theory

The main protagonist. A man who, despite being the youngest recipient of a Ph D in quantum physics in history at age 19, has spent much of his life (the following 15 years in fact) toiling away in obscurity. He currently works deep underground in Station 12, New Mexico, and hasn't been outside on the surface for years. Described as an aggressive jerk, alcoholic and part-time drug addict, Schtein is generally disgusted by people due to his anthropophobia, agoraphobia and fear of germs. Because of these phobias, he wears gloves constantly when outside his own home. Although he acts like a jerk a lot of the time, Schtein has a lot of hidden insecurities. After a lab accident that left him blind, he was outfitted with experimental cybernetic eyes but foolishly declined an upgrade from the black and white vision version to full color vision. Owns a talking, sentient cat, a survivor of a gene-splicing experiment on kittens. 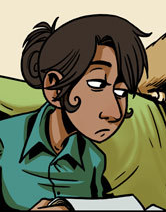 Dr. Schtein's assistant in the first chapter. Spent the second chapter searching for him, but at the present believes he's officially dead. Originally hailing from the UK (but travelled to the US at eighteen to study at Cambridge, Massachusetts), Delia is a young woman ostracised from scientific circles on the eastern coast - which is a shame considering her incredible talent. Delia is a hard worker to a fault. While seeming outwardly scattered and absent minded, this is in fact due to her mind being so absorbed in her tasks. She also has the tendency to speak her mind as thoughts come to her, even if they are quite rude. 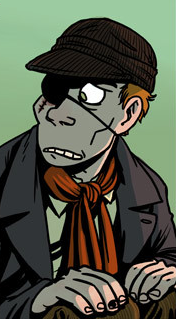 Dr. Schtein's beleaguered college roommate. Works for a shady company, in an undetermined position. Had an eye scratched out shortly before his first appearance in the comic. Laurence is Schtein's former brother-in-law and Alice's uncle. 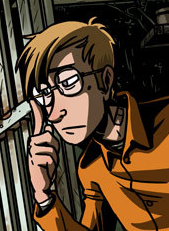 One of Dr. Schteins fellow inmates. For over ten years, Phineas Armastus, nicknamed Prof. Pain, was a professor who taught various courses in psychological neuropathy. Obsessed with the concepts of pain and suffering, and how they affect the human mind, he believes that only pain and suffering could make us strong. After not being satisfied with how his after school program went after a year, he decided to take his experiments one step further, with a deadly turn: students went missing, and there were dead bodies. He's currently working in the prison infirmary. 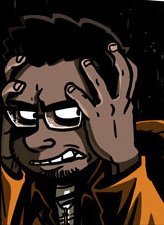 Schtein's cellmate and a seemingly-normal guy. He was arrested for robbery and is not proud of his crime. Prefers to go by "Jayjay."
Drew Mac Manus 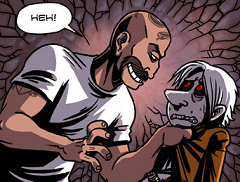 This is essentially their relationship.
Giant, tattooed prisoner, and most probably a skinhead. Harasses Schtein from the get-go, nearly rapes him in the prison showers. Seems to be the ring-leader of a group of hostile, violent inmates, responsible for regularly beating Schtein. Receives a Karmic Death.