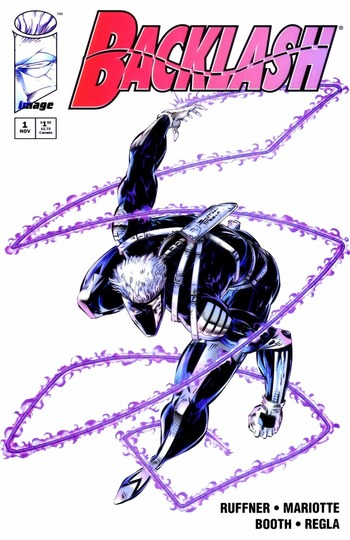 Backlash is a superhero created by Jim Lee and Brett Booth, originally appearing in Stormwatch before getting his own Spin-Off series.

Born 3,000 years ago in Atlantis, Marc Slayton is the son of a human woman and an enhanced Kherubim warlord. When Atlantis fell, Marc was spirited away to dry land and raised to adulthood by his father's former adviser. With no family or friends, he spent the next few millennia adventuring, becoming a ninja, a knight, and eventually a secret agent in World War II, where he was recruited into Team Zero, the predecessor to the Wildstorm universe's Team 7. During his service in the latter organization, he became exposed to the "Gen Factor", which activated his Kherubim heritage, granting him superpowers like the ability to generate psionic whips and turn into mist.