State of Decay has nearly 150 playable characters that can be found and recruited into the survivor community, each with their own background and set of skills and traits. In addition, there are several NPC groups that they player interacts with.

The initial survivor, Marcus was a clerk on vacation with his friend Ed in the mountains of Trumbull Valley when the Zombie Apocalypse began. They are soon joined by Maya and head to join other survivors.

A friend of Marcus’, Ed was hiking with him when they discovered the Zombie Apocalypse. He is bitten while examining a dead body, and taken by Marcus and Maya to a group of other survivors for treatment.

An off-duty U.S. army soldier, Maya was hiking with two friends when they were attacked by zombies. She was rescued by Marcus and Ed, and they soon joined a larger group of survivors.

The radio operator of the survivor community, Lily has lupus and thus cannot go on missions due to her health. She is an NPC and cannot be killed.

A local forest ranger, Alan is one of the starting survivors in the Church of the Ascension. He has an overbearing personality and is resentful of newcomers to the group.

The ConvictA volunteer worker at the Church of the Ascension, Sam is a foul-mouthed but kindhearted person.

The priest of the Church of the Ascension in Spencer's Mill.

Lily's older brother, Jacob is a rather careless survivor. He has only recently gotten back in touch with his family after moving away from Trumbull valley several years ago.

An exclusive character only available in the Updated Re-release State of Decay: Year One Survival Edition, as a bonus gift to players who already own the original game. A world-traveling North Indian Sikh, she combines a number of powerful traits along with a few special items that make her arguably the most powerful pre-defined character or Hero in the game.

A soldier that commands a squad sent into Trumbull Valley, Erik starts out hostile to the survivors, but grows tired of seeing the military leave them at the mercy of the zombies. He and several like minded soldiers start providing support to the survivors instead.

Before the Zombie Apocalypse, Becca's name was Alex. She lived in Marshall and was often arrested for solicitation (a.k.a prostitution) and drug possession. When the apocalypse began, she changed her name and became the leader of a small group of survivors outside the town.

A roaming doctor who treats survivors in all the communities, Hanson refuses to join any of the groups because he believes it would impede his ability to help other survivors.

A wealthy local figure whose late father was the mayor of Marshall at the time of the outbreak.

Survivors are spawned with consistent personality traits, backgrounds and skills. With some exceptions, most of them have names randomly chosen from a "pool" fixed for each character.

A paramedic whose entire team was killed on her first emergency call. Her last name is randomly chosen.

A student found "squatting" by the military. She always appears with the Funeral Director.

A funeral director found "squatting" by the military. He always appears with Karen Tolbert. His appearance and stats are fixed, but his name is randomly chosen.

Sheriff Carl's deputy, and originally a member of the Law faction. He asks to join the player's survivor community after Judge Lawton and Sheriff Carl are killed during a zombie siege. His appearance and stats are static, but his name is randomly chosen.

Courthouse Woman in Pink (and a Jockey Cap)

The player helps Sheriff Carl and the Deputy rescue this survivor from the downtown Marshall area during the Law quest chain. She joins the enclave "The Law", but asks to join the player's community after Judge Lawton and Sheriff Carl are killed during a zombie siege. Her appearance and stats are static, but her name is randomly chosen.
Breakdown Heroes

Unfortunate victims of the infection sweeping Trumbull Valley and other affected areas. Relatively slow and weak, they make up for it in numbers and may even surprise survivors by suddenly sprinting. Sometimes seen marching in large numbers aptly named, 'Hordes', they can present a very dangerous threat and may even mount assaults to the Home Base with several Hordes. In Lifeline, Hordes gain the ability to actually infest an area.

First (usually) seen during the siege of the Wilkerson's Farm, these zombies have grown almost twice in size of any human and have gained a considerable amount of mass weight-wise. Despite their exaggeratedly overweight appearance, they can take extreme amounts of punishment and even charge towards their victims. With their powerful arms, they can pound or tear apart unfortunate victims into two.

A severely mutated zombie with a hunched upper body, stretched out limbs and claws. Noticeably fast and agile, they present a significant threat to survivors and will relentlessly pursue them running on all fours. They have the ability to severely injure survivors and can even rip apart downed victims.

Also known as Bloaters, it is an infected creature with a slightly oversized pot-belly. Upon death it's belly will rupture, releasing a cloud of toxic gases affecting survivor's health.

Slow, aimlessly wandering zombies with dismembered upper limbs, they can emit high pitched screeches that attracts unwanted attention from other nearby zombies. Usually the heart of every infestation, they and their entourage must be destroyed in order to clear the occupied area.

Former members of local law enforcement who turned while still wearing riot gear. They are not much different from the regular zombies, save for the bulletproof vests they wear.

US Army personnel infected by the virus similar to the SWAT Zombie above, but gained the extra ability of constantly sprinting to their target, presumably due to their (former) military training regimen.

Lifeline takes place in the city of Danforth, just outside of Trumbull Valley. The players begin with command of Greyhound One, a elite military squad attempting to evacuate civilians from the city. 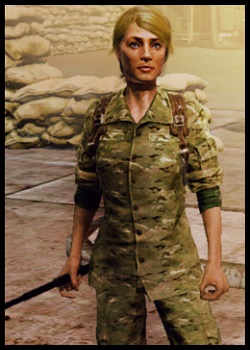 Commander of Greyhound One, Alicia is an experienced veteran who served multiple tours in Afghanistan before being deployed to Danforth.

A soldier who served with Alicia in Afghanistan for several years.

A soldier who joined the army after bombing his way through high school due to his deep disregard for authority.

An off duty soldier found alongside Dr. Julene Horn. Unlike other civilians rescued, she immediately volunteers her combat skills to assist the beleaguered members of Greyhound. Her appearance and stats are fixed, but her name is randomly chosen. 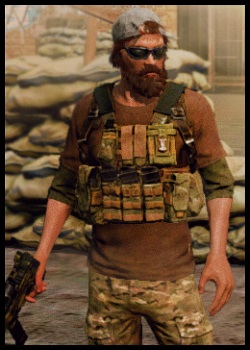 A special forces operative from the backwoods of Kentucky. He graduated with honors from a top university before joining the military.

As the infection rampaged through the city, and military control crumbling apart, many fighting soldiers found themselves cut off during the panic and confusion. The player can choose to seek out stragglers and bolster Greyhound's operational manpower. Their names, personality traits, backgrounds and skills are usually randomized, as well as their weapons.
Danforth Survivors

A military scientist with invaluable research regarding the zombie outbreak in Danforth. The Army tasks Greyhound One to locate and evacuate the doctor when his chopper crashes within the city limits.

Dr Horn's estranged wife, one of the few people left in Danforth with intricate knowledge of Dr Horn's research.

One of Dr Horn's known associates, as well as one of his most vocal critics.

A known collegue of Dr. Horn, who had close ties with his research.

A known member of the NGO, Human Future Fund with connections to Dr. Horn.

A local college student, and the son of an important government figure, Greyhound is tasked by HQ to extract him on behest of the local governor.

A local college student and Dr. Horn's research assistant. Was involed with Dr. Horn both academically and romantically.

A radio host, Vienna was not a fan of the military even before their retreat from Danforth, aside from a few elite units. Her number one priority is the safety of the remaining civilians in the city.