open/close all folders
As A Whole
The flagship, first-contact team of Stargate Command, first formed in 1997 with the goal of procuring alien technologies with which to defend Earth. Since then, they've gained no small amount of infamy for, among other things, almost single-handedly bringing about the fall of the Goa'uld empire. 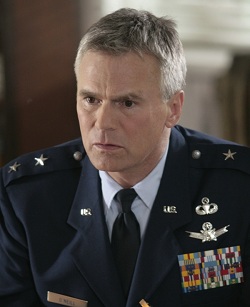 The leader of the reconnaissance team that traveled to Abydos in the movie, and of the original SG-1 team, Jack O'Neill has a background as both a combat pilot and an operative of the Air Force's Special Operations Groups. Gradually went from the tough, no-nonsense portrayal pioneered by Kurt Russell in the movie to a more light-hearted and sarcastic character that RDA was more accustomed to playing. Had zero tolerance for Technobabble.

Initially a full-bird colonel, he was promoted to brigadier general in "New Order, Part 2" and succeeded Dr. Elizabeth Weir as the head of Stargate Command so she could go off and lead the Atlantis expedition. He leaves the series at the start of season 9 to work at the Pentagon and is replaced by Cam Mitchell as head of SG-1 and Hank Landry as head of the SGC. As of Stargate Universe, he is a three-star general.

The Lancer crossed with The Smart Guy and another character from the movie, where he was played by James Spader. The team archaeologist and linguist. The latter aspect wasn't of much use in the series when it turned out that all the aliens spoke English, but he found his use in translating written text and providing exposition about ancient artifacts or mythology. He is an idealist and pacifist — in Seasons 4-5, often to the point of being a Messiah — and prefers to resolve conflicts via diplomacy rather than force of arms, often clashing with O'Neill as a result. Has a habit of repeatedly dying and coming Back from the Dead thanks to Applied Phlebotinum or intervention of Sufficiently Advanced Aliens. In fact, when Michael Shanks decided to leave and later reconsidered, he stayed dead (and ascended) for an entire season. 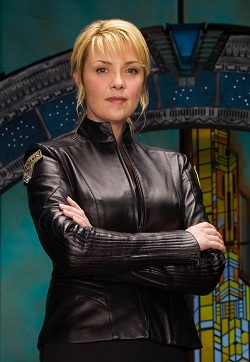 Carter as of Stargate Atlantis.
Played By: Amanda Tapping
First Appearance: "Children of the Gods"

The token female of the team. Like Daniel Jackson, served as the voice of reason, as opposed to O'Neill's gung-ho approach to problems. As a doctorate scientist, was the source of much Technobabble and Applied Phlebotinum, usually jury-rigged to solve this week's problem. Throughout the seasons, she went from "reasonably brilliant" to "genius who would be bathing in Nobel Prizes if not for the secrecy of the Stargate Program". Later promoted to full-bird Colonel and joined the Atlantis Expedition after SG-1 was cancelled. As of Stargate Universe, she has been given command of the Daedalus-class battlecruiser George Hammond. Appeared in more Stargate episodes than any other character. 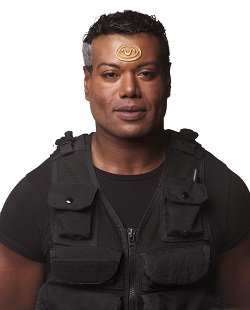 Played By: Christopher Judge
First Appearance: "Children of the Gods"

Originally First Prime of Apophis, he defected to the Tau'ri after becoming disillusioned with the Goa'uld. He probably underwent the most Character Development in the entire show, with Daniel as a close second: he gradually assimilated into the Earth culture, as well as developed complex emotions. About the only thing that remains by now of his original Spock Speak is his Catchphrase, "Indeed."

An alien, with a name inexplicably sounding less alien than that of his actor. Replaced Daniel Jackson for season 6, then unceremoniously written out when Michael Shanks changed his mind. He was essentially the geek figure that Daniel ceased to be by that point, but in many ways was different from his predecessor, as his primary motivation was atonement for what he saw as his fault — that is, Daniel's death. His fate following the Ori conquest of his homeworld Langara is unknown. 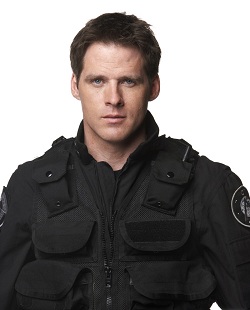 Replaced O'Neill as the leader of SG-1 for Seasons 9-10, which received the Fan Nickname "Fargate" (or sometimes "Starscape") due to the fact that he and Claudia Black were former Farscape leads. He wasn't, however, a straight O'Neill clone; while still a wisecracking action guy, he didn't have his predecessor's tendency to disobey orders. Also notable in that his "leadership" of the team was at best just in theory; he was the rookie (even compared to Vala, who had more experience) and didn't actually outrank any of his team. 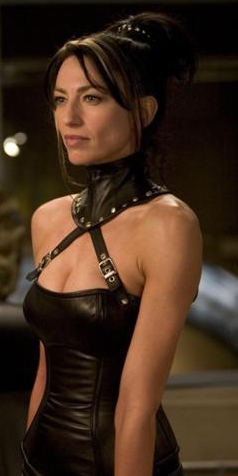 A genuinely new addition to SG-1 rather than a replacement, although she only officially joined the team in season 10, when SG-1 received a fifth member for the first time in its history.

About the only two things known for certain about her backstorynote it changes practically every time she opens her mouth are that her father is a rather useless con artist, and that for a relatively short time she was the host of the System Lord Qetesh, the Goa'uld impersonating the Egyptian goddess of sex. The Tok'ra removed Qetesh and Vala became a black market trader and con artist in the criminal underworld of the slowly collapsing Goa'uld Empire.

She first met up with SG-1 when she hijacked the USS Prometheus in "Prometheus Unbound" and joined the recurring cast in season 9 before being thrown into the Ori galaxy and used as the "virgin" Mary for their Dark Messiah, Adria. Once retrieved, she joined SG-1.