This page is part of the character sheet for Starfinder, covering Construct creatures.

The constructs' main unifying characteristic is that they're built rather than born, starting there existences as collections of non-living matter brought to awareness and motion by advanced science, powerful magic, or a mixture of the two. Although they can be built out of the remains of living creatures, they're distinguished from the undead chiefly by being animated by positive energy in some form or another.

Most constructs are not truly alive in the strict sense of the term — they have no souls, free will or self-awareness, existing as limited automata capable only of obeying instructions. This is not a universal rule, however, and many advanced constructs can be far more intelligent than organic beings.

To see the tropes for constructs in Pathfinder, click here.

Anacites
A robotic race constructed on Aballon. They are divided into two factions, Those Who Wait amass resources and power as they await the return of their creators while Those Who Become work to forge their own future. 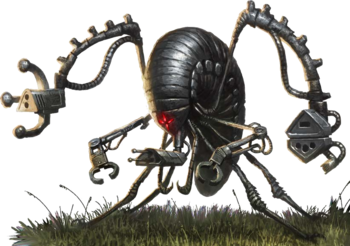 Figures crafted out of more-or-less any material and animated with bound elemental spirits.

Golems formed from a combination of cybernetics and organic material.

Golems formed from a swarm of nanobots. 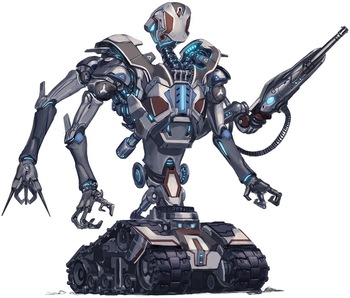 Magical robots originally created by the Azlanti Star Empire as assistants, scribes, and secretaries. Rumors about the machines serving additional roles as spies for the throne saw their use decline until the only remaining ones are the ones created before the Gap. 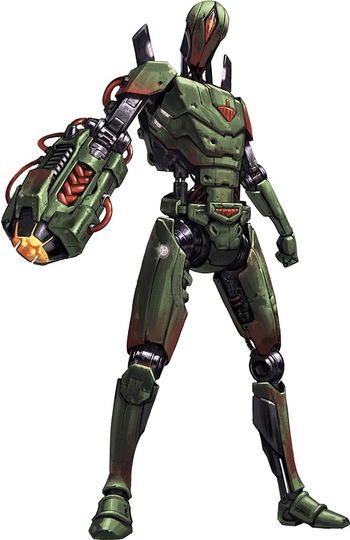 Expensive and powerful security robots favored by wealthy individuals and corporations. Their stats can be found in Signal of Screams: The Penumbra Protocol or online here

Guard robots created by ghibranis. They resemble a combination of the husk and membrane versions of their creators, with thick shells and decorative wings. Their stats can be found in Yesteryear's Truth.

Advanced holograms whose artificial intelligence has developed a spark of sentience.

Sentries used to protect cultural sites, even long after their creators are gone.

Networked aeon stones that serve as administrators in the Azlanti Star Empire.