Voiced by: Natasha Little (female Warrior), Mark Bazeley (male Warrior)
"I will bring the Republic to its knees!"

A scion of a distinguished Sith bloodline, the Sith Warrior's prominent lineage and powerful command of the Force lead to an early appointment to the Sith Academy on Korriban and an unusually accelerated training schedule. Becoming an apprentice to the powerful Darth Baras, the Sith Warrior soon becomes a power to be reckoned with in their own right. 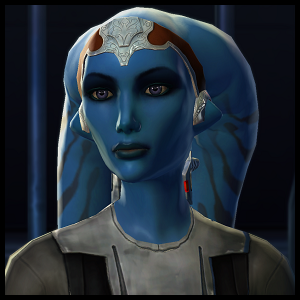 Voiced by: Catherine Taber
"Me and my buddy, the Sith. Nobody's going to pick on me at school!"

A female twi'lek, Vette was separated from her her family at an early age and sold as a slave to series of minor crime lords. When Nok Drayen, a legendary pirate utterly destroyed her latest owners' holdings, Drayen gave Vette and the other slaves a choice of freedom or joining up with Nok; Vette agreed to become a pirate, traveling the known worlds and learning to get in and out of places she wasn't allowed.

Years later, after Drayen suddenly released all of his people from service, Vette was left on Nar Shaddaa, where she joined up with other young, idealistic twi'leks and used her criminal abilities to rob and ruin those who exploited Ryloth's cultural artifacts and people...which eventually led to her capture and second enslavement on Korriban. An unquenchable spark, Vette is older than her years but far from mature, delighting in silly pranks and always ready to laugh at people who think too much of themselves.

In Knights of the Fallen Empire, she shows up as Gault's accomplice in a heist on Arcann's treasury ship. 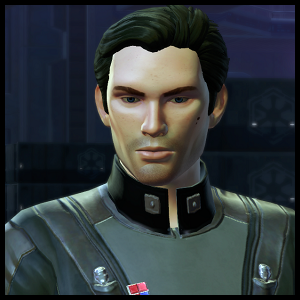 Voiced by: Richard Teverson
"Service is its own reward."

A male human Imperial operative recruited on Balmorra. He descends from an Imperial military family line, and his father was a colonel; however, his promising career ground to a halt when he turned the tide of battle by defying incompetent orders. Only Darth Baras' intervention kept him from being dismissed from the service outright, and he ended up stuck at a dead-end post on Balmorra for years until you came along. Potential love interest for female Sith Warriors. Originally, he was the Sith Warrior's healer companion. 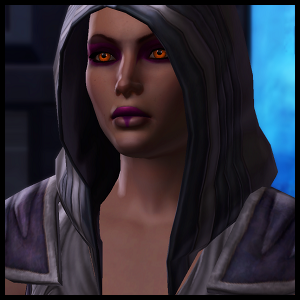 Voiced by: Rachael Leigh Cook
"All my life I've put up with deceit and denial. I thought the Jedi would be different. You've shown me otherwise."

A female human former Jedi Padawan with the unique ability to sense an individual's true nature and pierce any deception, acquired after Alderaan. Notably, there are two distinct ways to recruit Jaesa Willsaam, and the Sith Warrior's choice of how determines whether she is a renegade from the Jedi Order but still an adherent of the light side, or a true dark side Sith. Originally, she was the class's melee damage companion. 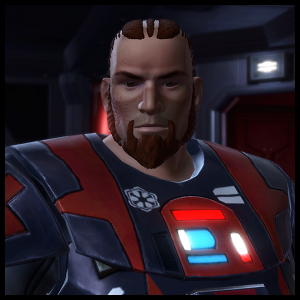 Voiced by: Adam Leadbeater
"The tougher the come, the tougher I get!"

A human Imperial Trooper. Pierce joined the Imperial military out of a lust for action rather than patriotism. Reckless and anti-authoritarian, Pierce has served in the Empire's special operations division and is recruited by the Sith Warrior on Taris. Minor romance option for female Sith Warriors. Originally, he was the class's ranged tank companion.

In Knights of the Fallen Empire, Pierce has since been promoted to Major, but is now stuck at Dromund Kaas to be paraded around as a propaganda tool. 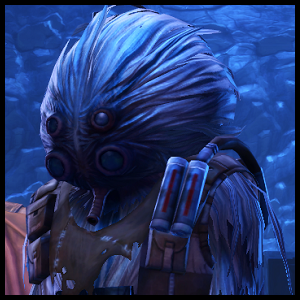 In Knights of the Fallen Empire, Broonmark is seeking vengeance the Wookiee diplomat who swore his clan into the Republic, blaming him for "softening" his people. 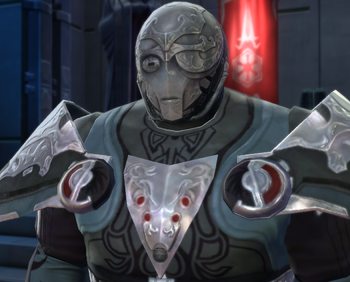 Baras with his mask
Click for him without his mask 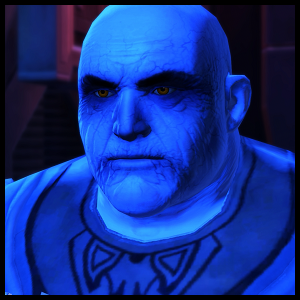 Voiced by: Jim McCance
Overseer Tremel: "Baras is a serious man but a master of deception. Everything he does and says is calculated. He will attempt to trip you up, test your nature, get to the heart of who you are. Always take him seriously. And I mean always."

The Sith Warrior's master. A cruel and manipulative Sith Lord, Baras was an ambassador to Alderaan during the peace talks at the close of the war. He hates Jedi, viewing them as hateful hypocrites that betrayed their own beliefs. He was instrumental in the Treaty of Coruscant, having been the original author. 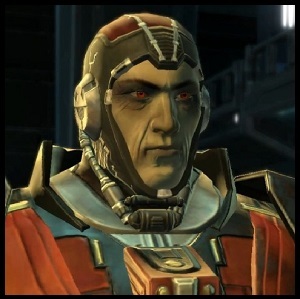 Darth Baras's master and member of the Dark Council, who urged the Empire to continue persecuting the war against the Republic. Appears in Chapter Two and oversees the enactment of Plan Zero. Becomes an Unwitting Pawn for Baras's ambitions. 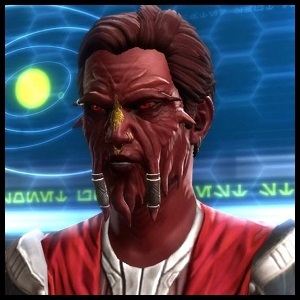 Darth Vowrawn is a charming and sophisticated elder statesman who has served on the Dark Council for decades—no small feat in the Empire, where the tenure of new Council members is often measured in weeks. (The events of the game, inside and outside the Sith Warrior storyline, bear that out.) His passionate, almost hedonistic pursuit of challenge is well known among his peers, who have learned never to underestimate his cutthroat enthusiasm. Vowrawn revels in the game of conquest and Sith power plays, driven to euphoria by all the rich details of his favorite sport. Many upstart Sith have attempted to best Vowrawn over the years through a variety of strategies, from complex schemes to bluntly direct surprise attacks. Although some scored temporary victories, Vowrawn's talent for adjusting his strategy on the fly has left him the final victor in all these confrontations.

He is the main antagonist to Baras during the third act. As such, he becomes your ally on and access to the Dark Council. Much later, if the the Outlander sides with the Republic on Iokath, he becomes Emperor after Acina dies.

A powerful member of the Dark Council, Darth Ekkage is the sister of Darth Baras, and is imprisoned on Belsavis. 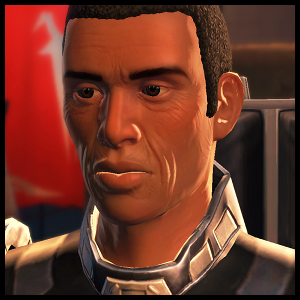 The Sith Warrior’s first master. Tremel is the one who orchestrated the Warrior’s early arrival on Korriban... defying Darth Baras in the process. 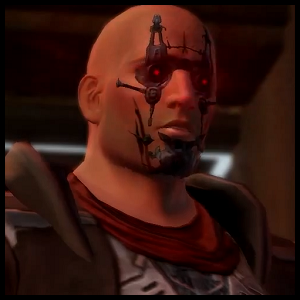 An apprentice of Darth Vengean, who really serves Darth Baras. 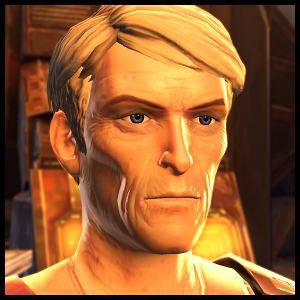 Baras's agent on Balmorra, with the public face of a resistance agent.

An acolyte of Darth Baras and the Sith Warrior's contact on Tatooine. She helps the Warrior retrace the trials of Jaesa Willsaam.
Duke Kendoh

The Sith Warrior's contact on Alderaan. He aids the Warrior in finding Jaesa Willsaam's parents. 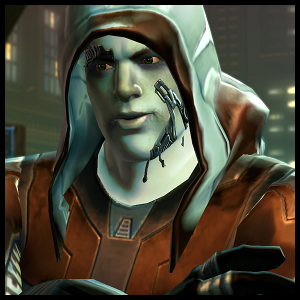 A Sith spirit awaiting the Emperor's return. Darth Baras enslaves her and uses her to build up his power base. 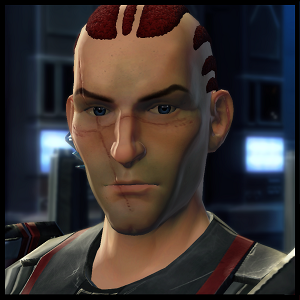 "My passions run deeper than yours. I am what it means to be true Sith."

The strongest acolyte in his trial group at the Korriban. Vemrin is poised to become Sith and Baras' new apprentice, that is until the untimely arrival of the Sith Warrior. 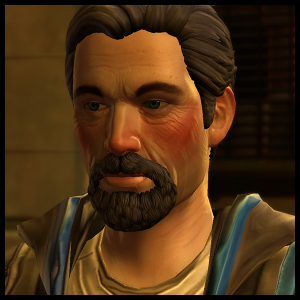 Darth Baras’ longtime enemy and the primary opponent of Act One. Karr is a veteran Jedi Master who, in his youth, touched and triumphed over the dark side in order to infiltrate the Sith. Baras still hates him because of the deception. Recently, Karr has come dangerously close to exposing Baras’ spy network within the Republic, thanks to his new Padawan, Jaesa Willsaam.

A Jedi Knight and general, whom Baras sends the Warrior after in Act Two.

A Jedi Master and hero of the Great Galactic War. He was Xerender's master and another of Darth Baras's nemeses. He was lost and believed killed in action.

An aristocrat of House Organa and Jaesa Willsaam's former employer before Jaesa was selected as a Padawan. Geselle Organa is now a general, and leads House Organa in the Alderaanian Civil War.

An unofficial division within Republic High Command, the War Trust is a collective of four generals that have been responsible for many innovations to Republic military tactics and armaments. The Sith Warrior pursues them to the planet Taris, where they are working on Project Siantide, a plan to harvest a new source of energy to power the Republic's weapons tenfold.

A Voss Mystic who aids the Sith Warrior on Voss in their search for the true Voice of the Emperor.