The Outlander and Companions

One of the eight great heroes from the Galactic War, the Outlander caught the personal interest of Emperor Valkorion. After a period of being frozen in carbonite, they escaped to rally the remnants of the Republic and the Empire against Zakuul. See the various class pages for class-specific tropes and voice actors. 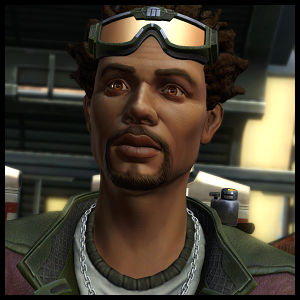 Voiced by: Ike Amadi
"We're going to win this thing. I tell you, it's destiny."

A former officer of the Zakuul military who defected from the Eternal Empire once Arcann's tyranny became apparent. 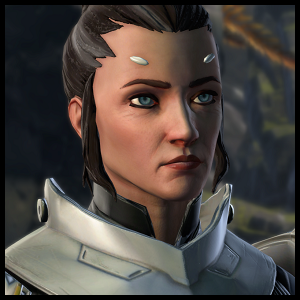 Even emperors must answer to the law.
Voiced by: Abby Credan
"Being a Knight means everything, but I don't let it define me. When it's time to go to work, I'm who I need to be. The rest of the time, I'm just myself."

A former Knight of Zakuul who defected from the Eternal Empire to stop Arcann. 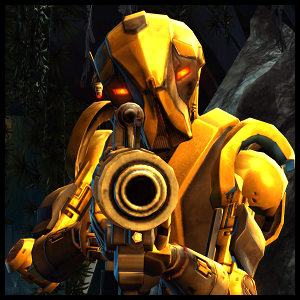 An HK series droid who has been programmed to protect "meatbags" at all costs.

The Lady of Sorrows

A Dashade the Outlander finds sealed within a tomb on Yavin IV.
Gault Rennow

A Chiss Jedi Master who had been wandering the galaxy for years, even before the Eternal Empire scattered the Jedi Order. She joins the Outlander if the player did well enough in the "Light vs. Dark" event.

A Zabrak Sith Lord, one of the few to achieve consistent victories against the Eternal Empire, who is disgusted with the Sith's capitulation to Zakuul and joins the Alliance. Originally intended as a possible reward for the "Light vs. Dark" event, she was eventually added to the game for the United Forces event, a reward for players who completed the United Forces Group Recon and/or United Forces Warzone Recon achievements (only doable in November of 2017).

An Ithorian Jedi Knight who became stranded for 10 years on an unknown planet until he stumbled across an Eternal Empire scouting mission. Forced to commandeer their ship, Choza learned that the Eternal Empire took over the galaxy and made it his mission to free the galaxy from Zakuul. He assisted the outlander on taking out the Star Fortress Orbiting Alderaan.
K'krohl

A male Whiphid who was a "talent scout" that recruited various criminals. He was hired by Lana Beniko to fight for the Alliance. K'krohl agreed to assist the Alliance commander on destroying the Star Fortress above Belsavis.
Veeroa Denz

A female Nautolan acolyte on Korriban who fled to Nar Shaddaa when the Eternal Empire attacked Korriban. She assisted the Alliance Commander on taking out the Star Fortress orbiting Nar Shaddaa.
Hemdil Tre

A male Arcona historian who had a talent of being a gunslinger. Sent by Theron Shan to observe the Star Fortress orbiting Hoth. When the Outlander arrived to take out the Star Fortress, Hemdil fought by their side. He made it his goal to observe and document the actions of the Alliance Commander.
"Deadeye" Leyta

A female Selonian who originally lived on Corellia. When her clan was oppressed from a larger clan, she decided to pay them a visit. The meeting resulted in a shoot-out which ended with Leyta being the only one standing, this earned Leyta the nickname "Deadeye". Leyta decided it was safer for her clan to move to Tatooine and do mercenary work. She found the Star Fortress to be a threat and teamed up with the Outlander to destroy it.
Rokuss

A Gormak from Voss. In his youth, Rokuss witnessed his brothers fall to the Alliance Commander. When he saw Star Fortress above Voss as a source of disease that affected his people. When the Outlander returned to Voss, Rokuss agreed to assist them in taking down the Star Fortress orbiting his planet. 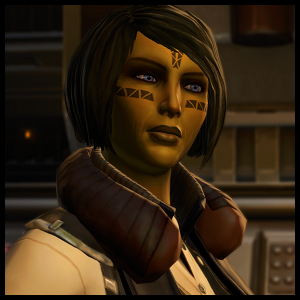 A female Mirialan, Hylo Visz was a smuggler that was employed by the Hutt Cartel, and later the Galactic Republic. Her claim to fame was breaking the Mandalorian Blockade during the war and becoming a very well paid hero of the Republic in the process. Some time later Visz was suspected of running afoul of the Hutt's and getting herself killed in the process. In Knights of the Fallen Empire, she serves as head of the Alliance's procurement specialist.

A Bothan Admiral formerly of the Republic, he now serves as the commander of the military forces.

A Voss Mystic who is in charge of the Force Enclave. 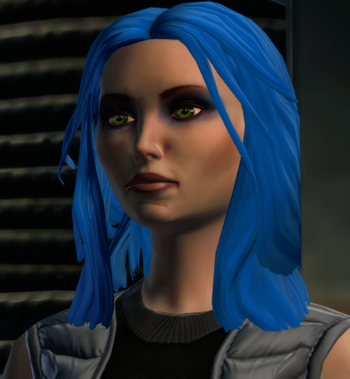 A female engineer in Koth's crew. She is considered to be a highly competent mechanic with a really big personality. 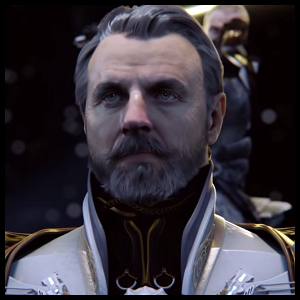 A man can have anything if he is willing to sacrifice.
Voiced by: Darin De Paul
"I can make you powerful beyond reason... If you only kneel."

Emperor of the Eternal Empire. Another of Vitiate's incarnations. Vitiate reveals that he had been fleecing the Sith and weakening the Republic so the Eternal Empire, his real followers, could conquer the galaxy with no meaningful opposition. 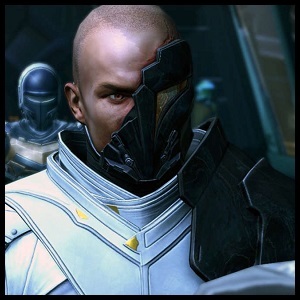 Click to see him in the light side route (spoilers) 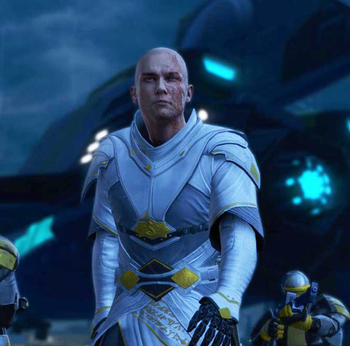 Voiced by: Erik Todd Dellums
"Destiny is a lie."

One of the two sons of Emperor Valkorion. At the start of the expansion, Arcann orchestrates his father's murder so he could rule himself. Arcann quickly proves himself to be a brutal tyrant. 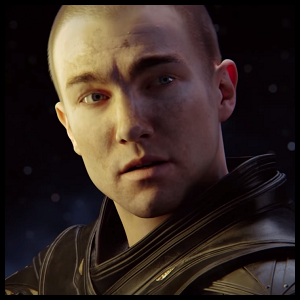 Voiced by: Erik Todd Dellums
"I missed you, little sister."

One of the two sons of Emperor Valkorion. He was killed by his twin brother Arcann in a fit of rage shortly before the expansion began. 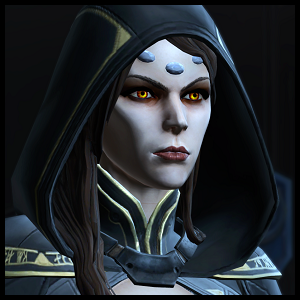 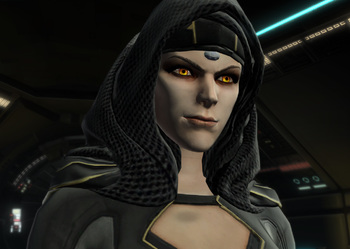 Voiced by: Natasha Loring
"Rules are for people who lack the creativity to break them."

The daughter of Emperor Valkorion. Vaylin's power over the Force was so great that Valkorion had her sealed away for the good of the Eternal Empire. When Arcann overthrew his father, he had Vaylin freed. Now Vaylin seeks to use her powers to satisfy her every homicidal whim.

Leader of the Scions of Zakuul. Heskal is obsessed with the idea of fate.

A lone survivor of the apocalyptic war that devastated Iokath. ARIES is the overseer of Iokath who reprogrammed all the droids for military purpose. Those who stumble on Iokath are put through a series of brutal tests.

Magistrate of Empress Vaylin, Indo Zal secretely plots his revenge on Vaylin for executing his sister. He teams up with the Outlander in the hopes of stopping Vaylin
Vinn Atrius

A former member of Vaylin's Horizon Guard, Atrius was angered at seeing the conditions of his planet after the Outlander defeated the Eternal Empire, and formed the Order of Zildrog to kill the Outlander and destroy the Eternal Alliance as vengeance.

A GEMINI captain who managed to sever her command connection to the Eternal Throne completely enough that even after Vaylin reset the GEMINI network to default and destroyed their free will, she remained free. She is still connected to the Throne and the rest of the Fleet and the GEMINI network, however. She is also a key member of the Order of Zildrog.

Senya's partner from when she was still a Zakuulan Knight.