open/close all folders
Advertisement:
Resistance Starfighter Corps
With few capital ships at their disposal, the Resistance relies on its Starfighter Corps as its primary method of attack and defense against the First Order. Led by Commander Poe Dameron, the fighter pilots of the Resistance are a mix of veterans of the war against the Empire, disillusioned New Republic pilots, and eager recruits who believe wholeheartedly in the cause or have felt the brutality of the First Order firsthand.

See his entry on the Resistance Heroes page.
Temmin Wexley 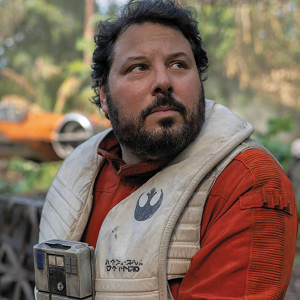 Born on the Outer Rim world of Akiva, Temmin is the son of Alliance war hero Norra Wexley and Brentin Wexley. After the Battle of Endor, he joined his mother as part of a special New Republic unit devoted to hunting down Imperial war criminals. Thirty years after Endor, Temmin joined the Resistance to combat the growing threat of the First Order, serving in Blue Squadron and becoming known as the organization's best reconnaissance pilot. He also served as the second-in-command of the Special Ops Black Squadron, which he command when Poe was on other assignments. 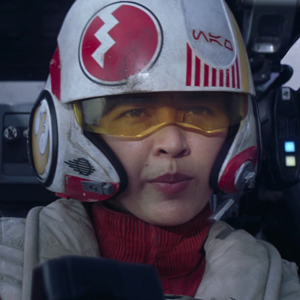 A human female from Dandoran, Jess is a skilled X-Wing pilot and mechanic. While normally assigned to Blue Squadron, she is also a member of Black Squadron, Poe's secret special-ops unit dedicated to locating Lor San Tekka. 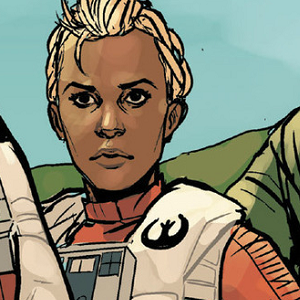 A human pilot who served in the New Republic Starfighter Corps under the command of Poe Dameron as a member of Rapier Squadron. She joined the Resistance alongside her commanding officer and was a made the leader of Stiletto Squadron. Poe later selected her to become a member of Black Squadron, a small taskforce dedicated to finding Lor San Tekka before the First Order. 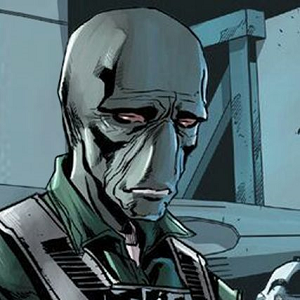 Appearances: Star Wars (Marvel 2015) | Shattered Empire | Poe Dameron: Free Fall | Poe Dameron
"Every TIE fighter we destroy now is one less that can attack us when things really get hot. We have to fight them every chance we get!"

A male Duros A-Wing pilot who flew in Green Squadron during the Battle of Endor alongside his friend Shara Bey. Following the battle, he is promoted to squadron commander to replace Arvel. Thirty years after the Empire's defeat, L'ulo joins the Resistance and serves alongside Shara's son Poe. 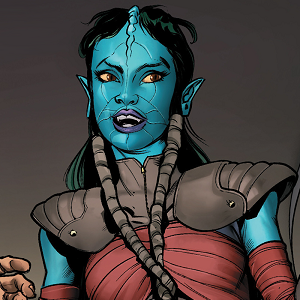 A former soldier in the New Republic Navy who became an investigative journalist for Galaxy Beacon's Hosnian Prime offices. She contacts her old friend Poe Dameron claiming to have information on the First Order. 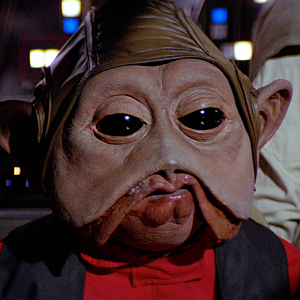 Portrayed by: Mike Quinn, Richard Bonehill (stunt double in Return of the Jedi)
Voiced by: Kipsang Rotich
Appearances: Princess Leia | Twilight Company | Moving Target | Return of the Jedi | Adventures | Bloodline | Age of Resistance | The Force Awakens | The Last Jedi | Resistance Reborn | The Rise of Skywalker
"I think they're jamming us!"

A Sullustan who serves as a freelance pilot for the Rebellion. He participated in several operations flying his freighter, the Mellcrawler, and later assists Lando in flying the Millennium Falcon during the Battle of Endor. Thirty years after the Battle of Endor, Nunb is among several Alliance veterans who joins the Resistance to combat the growing threat of the First Order. 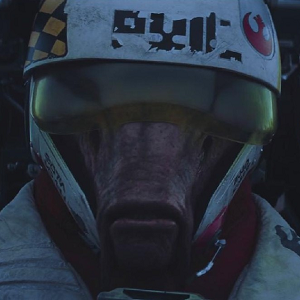 Voiced by: Matthew Wood
Appearances: Bloodline | Resistance | The Force Awakens
"But no damage!"

A skilled but reckless Abednedo X-wing pilot in Red Squadron. He was formerly a pilot in Cobalt Squadron. 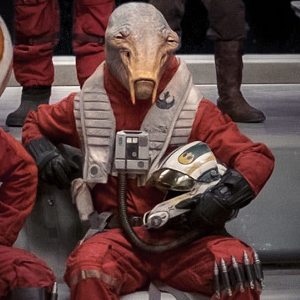 Voiced by: ???
Appearances: The Force Awakens | The Last Jedi | Poe Dameron | The Rise of Skywalker

A hotshot pilot serving the Resistance on D'Qar. After the Battle of Starkiller Base, C'ai becomes Poe Dameron's wingman and aides him in his efforts to keep the Resistance alive during the First Order's pursuit of their fleet. 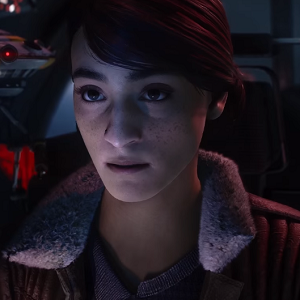 The daughter of Iden Versio and Del Meeko. 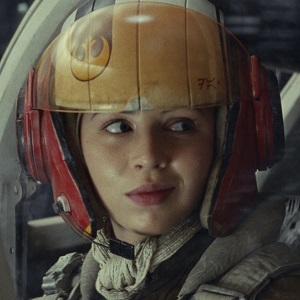 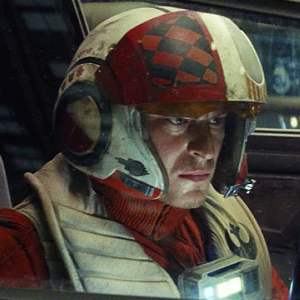 Portrayed by: Noah Segan
Appearances: The Last Jedi
"No fun, copy that."

A X-Wing pilot who participates in the Evacuation of D'Qar and Battle of Crait. 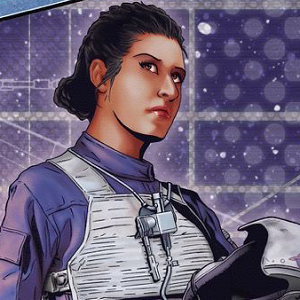 A ex-racing pilot from Pamarthe, she served as a personal aide to Leia Organa after being forced to retire from Han Solo's racing team. When Leia founded the Resistance, Greer was among the initial group of pilots who joined.

Hailing from Gatalenta, Joph was a member of the New Republic's Precision Air Team stationed at the Senatorial complex on Hosnian Prime. After being assigned as a pilot to aide Senators Leia Organa and Ransolm Casterfo to investigate increased criminal activity around Ryloth, Joph was drawn into a series of events that culminated in the founding of the Resistance.

A Resistance pilot with a crush on tech officer Peet Deretalia. 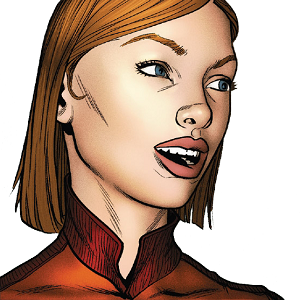 A Resistance pilot. She and some others were personally vouched by fellow pilot Joph Seastriker to General Organa as the first new members of the Resistance. 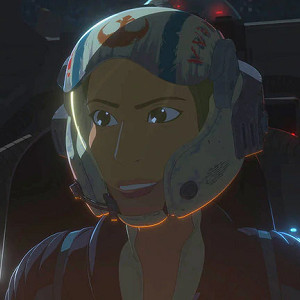 Yeager's old comrade, Torra's mother, and Captain Doza's wife. A veteran pilot for the Rebellion. she now serves in the Resistance as the commander of Jade Squadron. 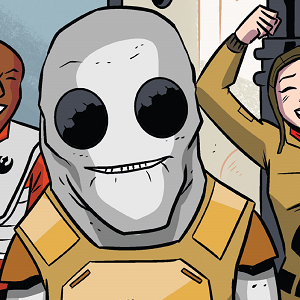 The commanding officer of the Resistance's StarFortress bomber squadrons. 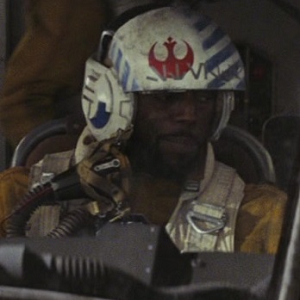 The pilot of the Cobalt Hammer. Finch was a member of the New Republic's scout services, with the horrors he saw committed by the First Order on the edges of space driving him to join the Resistance. 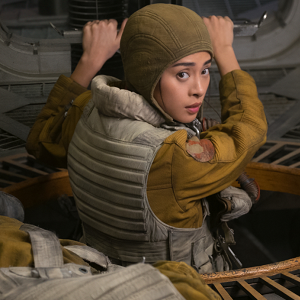 Rose Tico's sister, Paige serves as the vertical gunner on the Cobalt Hammer. 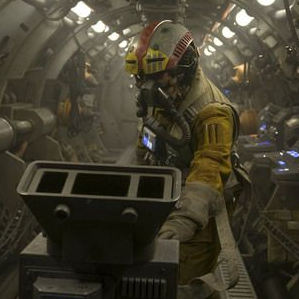 A crewmember of the Cobalt Hammer, serving as this ship's bombardier. 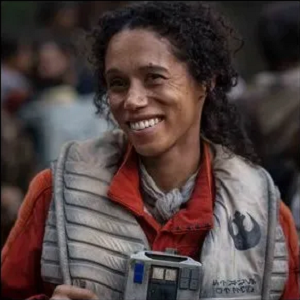 Portrayed by: Vinette Robinson
Appearances: The Rise of Skywalker

Larma D'Acy's wife. Originally a commercial pilot on Warlentta, she joined the Resistance alongside her wife. An A-Wing pilot for Cobalt Squadron, she was reassigned to other missions with Snap Wexley during the evacuation of D'Qar and the Battle of Crait. 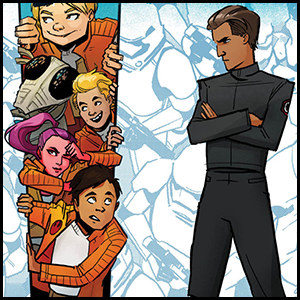 They want to be heroes. The Galaxy has other plans.

An eleven-man squadron of cadets under the leadership of Jo Jerjerrod, training for the Resistance Starfighter Corps at the Yard. However, several cadets fought over reprogramming AG-90, which led to the Resistance base's power being shut down as a result of their antics. As punishment, Ackbar disbanded the squadron and had them assigned on a scavenging mission to Vodran.

A young man who leads an X-Wing cadet squadron, the J-Squadron, under the Resistance.

An orphan boy from the world of Durkteel who was recruited into the Resistance. 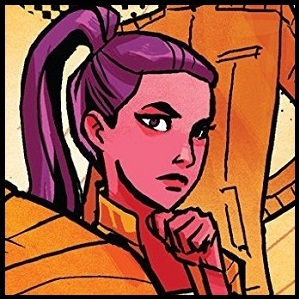 The daughter of a family that owned a hotel on Kergans, Lorica is a Zeltron girl famous for her exploits foiling antagonistic smugglers and destroying an illegal weapons cache in her hotel. 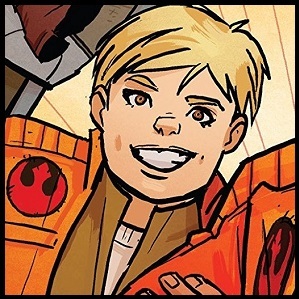 A troublemaker boy from Ques, a world in Hutt Space.

Dec's proclaimed brother, actually a droid. As Dec was an only child, the boy's mother built AG-90 as a surrogate brother for him.

A Rodian boy who left his farming life to join the Resistance. He ended up becoming Mattis' first friend in their career as Resistance cadets.

See his entry on the Resistance Heroes page.
R2-HA

A pink astromech droid who accompanies Black Squadron on their mission to Megalox. 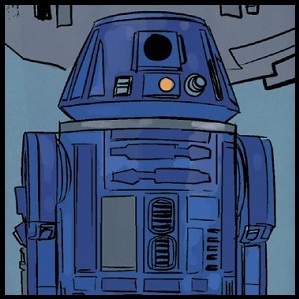 A purple astromech droid who flies with Jess Pava in Black Squadron.

A green astromech droid who accompanies Black Squadron on their mission to Megalox. 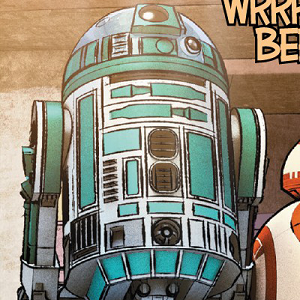 See her entry on the Colossus character page. 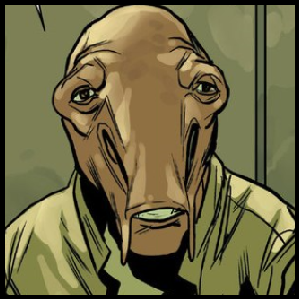 An Abednedo starfighter technician who is training to become a pilot. Oddy serves as Black Squadron's mechanic. 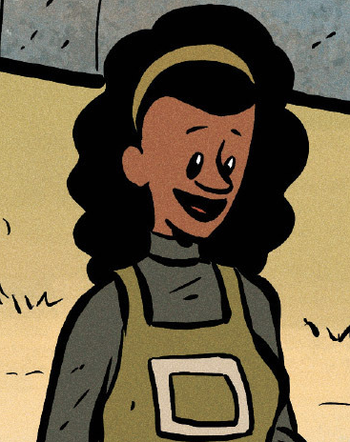 A tech officer working for the Resistance.

See his entry on the Colossus character page.