Warning! This page contains unmarked spoilers from Episode I and II! Caution advised!

A list of characters affiliated with the Forceless Collective. Click here to return to main characters page.

A faction of strange creatures of unknown origins, presumably from outside the galaxy. Unlike all other life forms and as their name implies, they are completely disconnected from the Force. They seek to control the entire universe, by possessing all life if necessary. 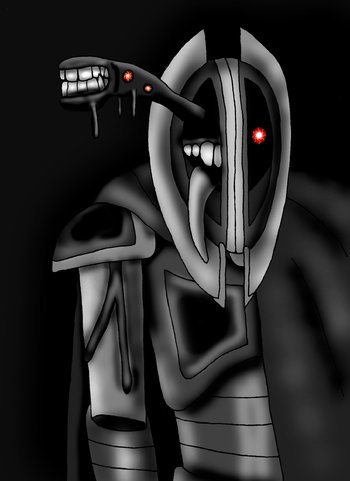 The recognized leader and namesake of the Valkoran Empire. However, he's using the Valkoran as a proxy cult for the Forceless Collective, his real empire.

The main generals of the Forceless Collective and Valkor.

Valkor's right-hand woman and rival to Belluzub, this Force Vampire possessed Emilin, turned her into the being known as Mortaqa and consumed the life-force of everyone on Christophsis.

Valkor's left-hand man, a former Golubrum despot, and an all-around sadistic brute. Summoned on the "Death Star Forge" over Krantisi.

The first Archfiend Zolph Vaelor encountered (and before he even learned about the Collective). Encountered on Tatooine and capable of terrakinesis.

The second Archfiend Zolph Vaelor was to stop, but he managed to prevent its summoning on Polus.

A Cranaquia capable of mass water manipulation. Summoned on Manaan.

An Archfiend encountered on Dagobah and the first Archfiend Zolph fights in Episode II. A colossal, nigh-impervious creature of unknown origin.

An Archfiend fought and defeated on Korriban/Moraband. A large, bipedal dragon with a body that looks like a skull with three heads coming out of it. Older brother of Orotice.

A cybernetically-modified Archfiend that was created from birth to serve the Collective. Summoned on Dxun.

The Archfiend of Kashyyyk. Notable for being one of the only Archfiends to be summoned before Zolph Vaelor get to his temple.

The Archfiend of Guaymar and the perceived namesake deity of the Stythanyst death cults. Unlike most of the others, he gets summoned even before Zolph lands on Guaymar.

Also known as the Mad God in Krishari culture, this Archfiend was summoned on Krishar during the reign of the Infinite Empire.

Dynn Manthis's replacement arm during her service to the Valkoran Empire. Created from a sleeper symbiote snuck onto Dynn via a donated arm, it has a mind and personality of its own.

A Py'ko'ra assigned as the warden of the Darksand Correctional Facility.