This page is for characters exclusive to Star Wars: The Old Republic tie-in novel Fatal Alliance. For characters that later appear in the game itself, go here.

A male Kiffar Padawan to Satele Shan. He has a unique ability to touch objects and see visions of events the objects have been near, though he hasn't mastered it.

After the events of Fatal Alliance, his performance in the battle, mastery of his gift, and resistance to Darth Chratis' temptation cause the Jedi Council to declare him worthy to undergo the Jedi Trials and become a Jedi Knight.

A Kiffar Republic trooper who was dishonorably discharged for snitching on a superior. Choosing to continue fighting for the sake of protecting the people, even without an income, she met Shigar Konshi and decided to tag along with him. 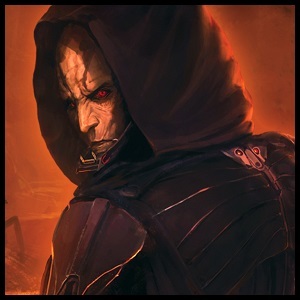 Appears in: Fatal Alliance
"There can be no peace because peace is the lie."

An ambitious Sith Lord with dreams of one day rising to the Dark Council. Eldon Ax was his Apprentice, whom he treated rather poorly.

He was eventually killed during Fatal Alliance when Ax commanded the Hexes to kill him. Later, Darth Howl told Ax that everybody on the Dark Council hated Chratis and would never have promoted him.

Born Cinzia Xandret, she is a Sith Apprentice with a personal stake in the plot of Fatal Alliance: the mastermind of the Hexes is her own mother, Lema Xandret.

Eventually, she manages to gain control of the Hexes and assassinates her Master, Darth Chratis, with them, then orders them all to self-destruct. Darth Howl offers to make her his Apprentice, and she accepts.

An Epicanthix agent who pretends to be a Republic envoy in order to spread misinformation and gather intelligence for the Empire. During Fatal Alliance, he gets caught up in events and forced to work with the heroes to save that day.

A Mandalorian warrior who expresses contempt for Jedi, Sith, the Republic, and the Empire, but manipulated events to force the Republic and Empire into a temporary alliance to deal with the threat of the Hexes during the novel Fatal Alliance.

A smuggler, born Jeke Kerron, who found a strange artifact in the remains of the self-destructed ship, Cinzia, kick-starting the plot of Fatal Alliance. He gets caught up in events and forced to work with the heroes to save the day.

When her daughter Cinzia was discovered to be Force-sensitive, Lema refused to allow the Sith to take her child. She failed and was sentenced to death, but she escaped, vowing revenge against all Force-sensitives. She designed incredibly powerful, self-replicating, self-evolving droids to be her instruments, which were soon nicknamed "Hexes" by the other characters. She also tried to form an alliance with the Mandalorians, but Dao Stryver realized that she had gone mad and the Hexes would eventually wipe out all life in the galaxy if they weren't stopped.

The leader of a squad of six Republic soldiers escorting Envoy Vii.
Hetchkee