Arkanis Sector
Located near Hutt controlled space, the Arkanis Sector played a key role in galactic affairs during the Clone Wars and Galactic Civil War. The Clone Wars began on Geonosis, which also served as the initial building site of the first Death Star. Key Imperial military outposts were located throughout the sector, including Sentinel Base and the Arkanis Officer Academy. The remote desert world of Tatooine was also located in the Arkanis Sector.

A human dominated world that was home to an Imperial Officer Academy. While the planet was captured by and joined the New Republic near the end of the Galactic Civil War, many Arkanisians retained Imperial sympathies.

Appearances: Aftermath: Life Debt note  mentioned only | Age of Resistance note  mentioned in flashback | The Last Jedi note  mentioned
Admiral Brooks: "Given you found his mother in a kitchen, you'd think your illegitimate son could at least serve a drink, Commandant Hux."

A kitchen worker whom Brendol Hux had an affair with, resulting in Armitage Hux's birth.

Appearances: Aftermath: Life Debt note  mention only
Gallius Rax: "[Brendol] has a child — a bastard boy, as I understand. Not born of his wife, Maratelle, but of some... kitchen woman."

The wife of Brendol Hux, though she is not the mother of his son, Armitage.

A large, red, rocky world close to Tatooine. It was a key world to the Confederacy of Independent Systems during the Clone Wars and the construction site of the first Death Star. Has many moons, including one (barely) habitable ice moon called Bahryn, as well as an impressive ring system. 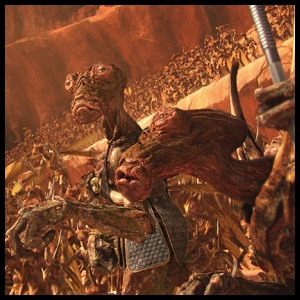 Geonosians were insect-like beings, complete with wings, nesting in colonies, who conspired with the Separatists to develop plans for the first Death Star. 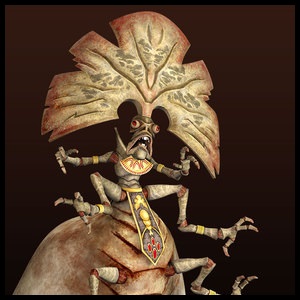 The true leader of the Geonosians during the Clone Wars, Karina resides beneath the Progate Temple, where she lays eggs and issues orders to public leaders like Poggle the Lesser. After the sterilization of Geonosis, another recently hatched but infertile queen took the name.

Tropes applying only to Karina the Great from the Clone Wars era:

Tropes applying only to Karina the Great from the Galactic Civil War era:

See his entry on the Separatist Alliance page.
Klik-Klak 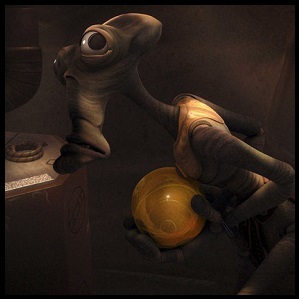 Klik-Klak is a male Geonosian living in the depths of an old temple on Geonosis, controlling a leftover droid army. He is one of the last of his kind, but protects a queen egg in hope of resurrecting his species.

See its own page.