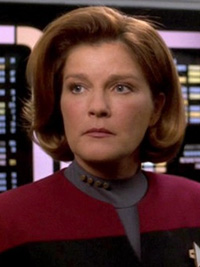 Played By: Kate Mulgrew
"Abandon ship? The answer's No. I'm not breaking up the family."

A former Science Officer who was given command of a prototype Intrepid-class starship. On her maiden voyage, the ship was hurled through space to a distant corner of the galaxy. Janeway spent the next seven years doggedly (and often recklessly) trying to get her crew home. 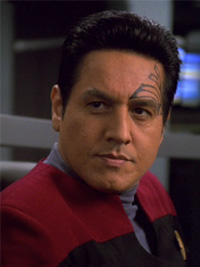 Played By: Robert Beltran
"As Captain, you're responsible for making decisions in the best interest of your crew. And I think you have to ask yourself if you're doing that."

A big name in the Maquis, a group of freedom fighters contesting Federation activities. Chakotay's ship was yanked into the Delta Quadrant shortly before Voyager was. Over the course of the pilot, he and his crew form an uneasy alliance with Janeway. Since he is a former Starfleet officer, Janeway re-activates his commission and makes him her Number Two. He provides the voice of reason among the bridge crew. 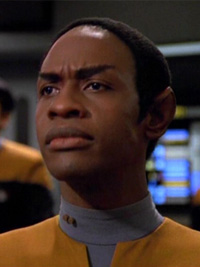 Played By: Tim Russ
"On the contrary, the demands on a Vulcan's character are extraordinarily difficult. Do not mistake composure for ease."

Tuvok is an old friend of Janeway's who was assigned to spy on the Maquis. He takes up the positions of Tactical Officer and Security Officer in the consolidated crew. The first Vulcan to be played by an African-American actor. (A desert planet would likely produce skin tones rich in melanin.) The character has a prominent role in the Fan Film series Star Trek: Renegades, which was produced by the actor. 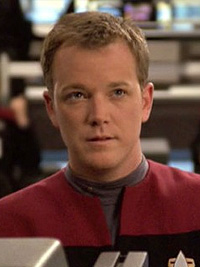 Played By: Robert Duncan McNeill
"Asking me to give you a bumpy ride is like asking a virtuoso to sing off-key."

Ace Pilot who joined the Maquis after getting booted out of Starfleet. He was caught and arrested on his very first mission. The opening scene of the show is Janeway securing his release from prison. His Backstory is similar to that of TNG guest character Nick Locarno, also played by McNeill. Though his personality doesn't change, his onboard relationships change wildly: forming a strong bond with Kim, harrying the Doctor, and later starting a family with Torres. 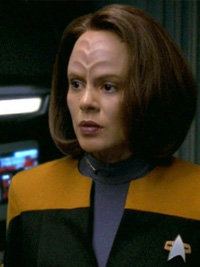 Played By: Roxann Biggs-Dawson a.k.a. Roxann Dawson
"I inherited the forehead and the bad attitude, that's it."

A half-breed engineer in the Maquis, now put in charge of Voyager's engines. She counts as a Three-fer Token Minority, but she has renounced her Klingon lineage. It takes a her a while to get a lid on her Klingon rages. Over time, she becomes a surrogate daughter to Janeway and a love interest for Tom; by the end of the series, she gives birth to a girl, Miral Paris. 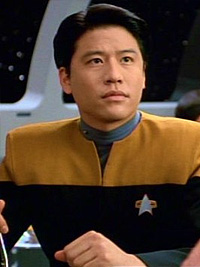 Played By: Garrett Wang
"I better get to the bridge. You never know when Ensign Kim'll be called upon to take command again."

Harry is Voyager's lone innocent. He's a glorified administrator who never moves up in rank (as there supposedly isn't any room), but he is eventually put in charge of the night shift. Over time he becomes more ambitious: bucking for a promotion and, occasionally, standing up to his friend Tom. 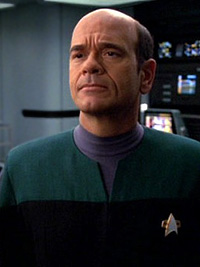 Played By: Robert Picardo
"Please state the nature of the medical emergency."

Voyager had an actual doctor, but he died en route to the Delta Quadrant. Fortunately, the ship is outfitted with experimental software: an Emergency Medical Hologram who can oversee Sickbay when the real Doctor is unavailable. Imperious, snarky, and pushed way beyond his comfort zone, The Doctor became a fan favorite. 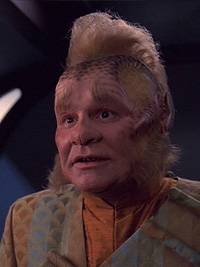 Played By: Ethan Phillips
"I'm not a fighter. I'm just a cook — who sometimes imagines himself to be a diplomat."

Self-appointed "Morale Officer". A denizen of the Delta Quadrant who runs into Voyager not long after her arrival. Neelix is a jovial and, at times, resourceful junk trader who signs on as a guide to Janeway. 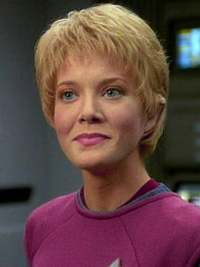 Played By: Jennifer Lien
"I want complication in my life."

Kes is a medical assistant in Sickbay: an antidote to the Doctor's awful bedside manner. Shortly after she joins the ship, she begins to help the Doctor develop an identity. She was Neelix's girlfriend until they broke up in the third season. Eventually, her latent telepathic powers grow out of control and she leaves the main cast. 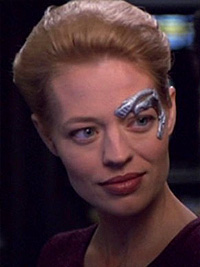 Played By: Jeri Ryan
"I may no longer possess Borg perfection, but my experience as a drone has taught me to be efficient and precise."

Voyager's de facto Science Officer is a disconnected member of the Borg, the dominant species in the Delta Quadrant. Once a human girl named Annika Hansen, she and her family were the first Homo sapiens to be assimilated. Eighteen years later, she was assigned to Voyager as a liaison between Voyager and the Collective. After trying and failing to assimilate Voyager, she was liberated against her will and made an individual.

True to her name, Ryan was a lucky addition to the ensemble and is probably most responsible for VOY enduring seven years. Twenty years later, Ryan reprised the role on Star Trek: Picard.

For more information, see her page. 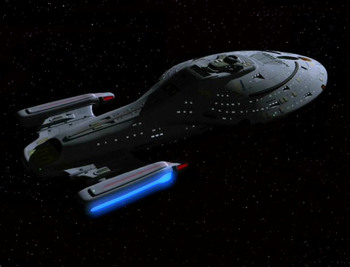 NCC-74656
"Voyager may not be as big as a Galaxy-class ship, but she's quick and smart, like her Captain."
— Admiral Patterson, "Relativity"

A new Intrepid-class starship whose first deployment gets her and her crew stranded on the wrong side of the galaxy. 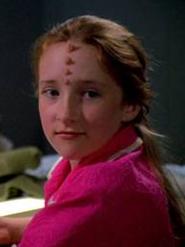 The first child born on Voyager, Naomi joins the crew in the middle of Season 2. She ages at least twice as fast as a human child, thanks to her father's Ktarian heritage. She lives with her human mother, Ensign Samantha Wildman, but doesn't know her Ktarian father, who is back in the Alpha Quadrant serving aboard Deep Space Nine. Neelix is her primary caretaker besides her mother. She eventually develops an unlikely friendship with Seven of Nine. When Icheb and the other Borg children come aboard, Naomi finally has someone her own age to socialize with. She is last seen as a pre-teen, in one of the last episodes of the series. 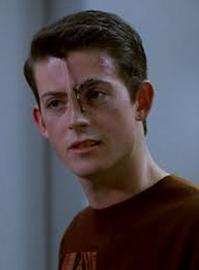 Icheb joins the crew in mid Season 6, when Voyager liberates him from the Borg Collective along with three other children. The others eventually leave the ship to live with new adoptive families, but Icheb stays aboard. He is close with Seven of Nine, and also becomes a mentor to Naomi. Thanks to his Borg upbringing, he is a typical Teen Genius, incredibly book-smart but socially awkward.

A Vulcan ensign who works under B’Elanna Torres as part of the engineering crew. A capable crew member, he’s usually a solid hand for B’Elanna, and in the episode “Blood Fever,” he even expressed a romantic interest in her. It would be a bit of an understatement to say that it didn’t work out.

One of the Maquis crew. A Betazoid with uncontrollable killer urges; he kills a man for looking at him funny and Tuvok tries to help him deal with it.

Stellar cartographers aboard the ship.

Samantha Wildman
Played By: Nancy Hower
An ensign who was pregnant before Voyager got lost in the Delta Quadrant. She's a member of the science division.
Ayala
Played By: Tarik Ergin 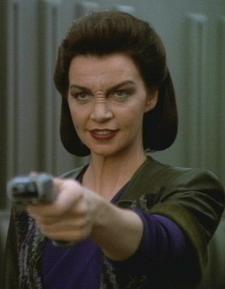 Played By: Martha Hackett
"Men just get more distinguished as they get older. A few lines here, a little grey there, it adds character. Too bad their minds start to go."

A fiery member of the Maquis and Chakotay's lover. She turns out to be a surgically-altered Cardassian spy who got caught in Janeway's dragnet. Seska is caught attempting to smuggle Federation technology, then defects to the Kazon, where she climbs up the ranks by becoming pregnant with Maje Cullah's child. She was the over-arching villain of Seasons One and Two, before being killed off in the Season Three shake-up. 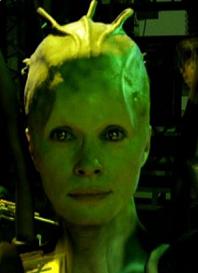 The Borg Queen is back, although it's a little unclear whether this is the same Queen Bee from the theatrical film First Contact. She is busy putting down a Borg revolt and constructing a transwarp tunnel to Earth. Alice Krige reprises her role in the series finale.

The captain of both the Aeon and the Relativity, Starfleet timeships from the 29th century. He has a bad habit of encountering the Voyager crew via time travel and promptly going crazy and trying to kill them.

A Maquis fighter aboard Voyager who became The Mole for the Kazon.

First Maje of the Kazon-Nistrim sect.

A Q that was sealed in a meteor by the rest of the Continuum. When Voyager accidentally releases him, he asks for asylum in the Federation. This leads to a court hearing between him and John de Lancie Q.

The father of Lieutenant Paris, and head of the Pathfinder project that's dedicated to locating, contacting, and recovering Voyager.