For tropes related to these characters in the "Prime" timeline, see Star Trek: The Original Series

For the films themselves, see Star Trek (2009), Star Trek Into Darkness, and Star Trek Beyond. 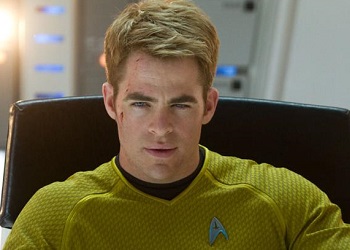 "I don't believe in no-win scenarios."
Played by: Chris Pine
Dubbed in French by: Emmanuel Garijo

The youthful and slightly caddish captain of the USS Enterprise. Despite his wanton and frequent disregard for authority, his intellect and overall sense of justice quickly won him over in Pike's eyes, eventually landing him the captain's chair of their latest and greatest vessel. 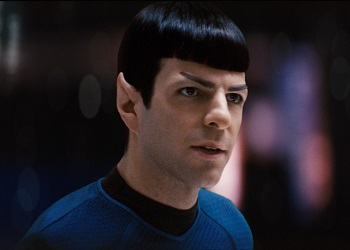 A brilliant commander and science officer in Starfleet. He acted as Pike's second-in-command until he was ultimately promoted to be the Enterprise's "acting captain." It didn't last long once Kirk pushed his Berserk Button, but the two eventually reconciled and became close friends. He is "the brains" of Kirk's crew, offering purely logical advice. 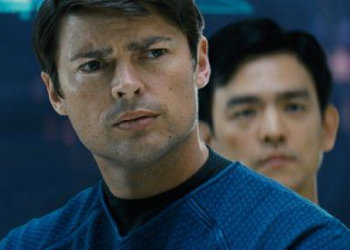 "Dammit, man! I'm a doctor, not a physicist!"
Played by: Karl Urban
Dubbed in French by: Alexis Victoir (First Movie and Into Darkness), Fabrice Josso (Beyond)

Kirk's best friend. An Earth physician who lost everything except "his bones" in a divorce with his wife, he was left with no other option than to join Starfleet as a medical officer, despite being deathly scared of space. He quickly became the ship's chief medical officer. He is the "heart" of the crew, offering Kirk moral advice. 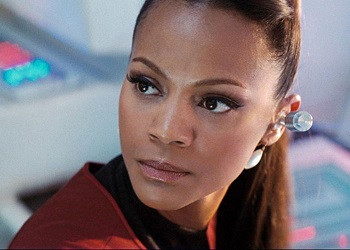 "Her shot's on her. Thanks, but no thanks."
Played by: Zoe Saldana
Dubbed in French by: Ingrid Donnadieu

The ship's communication officer. She's had a run-in with Kirk before he joined Starfleet as he attempted to hit on her (eventually starting a bar brawl), but never even remotely expressed any interest in him. In a relationship with Spock. 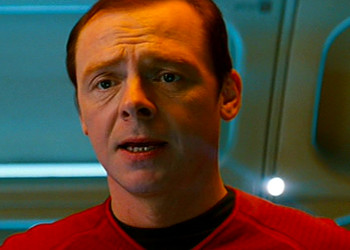 "I'M GIVIN' HER ALL SHE'S GOT, CAPTAIN."
Played by: Simon Pegg
Dubbed in French by: Cédric Dumond

The most brilliant trans-warp physicist and ship engineer alive, he's largely responsible for bringing the technology as a whole to where it currently is. That said, a certain Noodle Incident regarding a prized beagle landed him at a dead-end recon station for months — that is, until Kirk and Spock Prime ran into him. Works as the ship's main chief engineer. 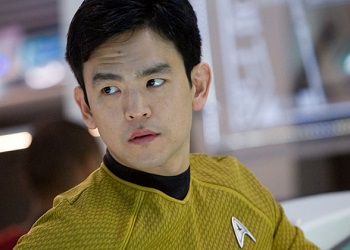 "If you test me...you will fail."
Played by: John Cho
Dubbed in French by: Alexandre Nguyen

The ship's replacement, later chief, pilot. He's also a total badass with a sword, and has a poker face that makes McCoy proper scared. All said and done, a very nice guy. 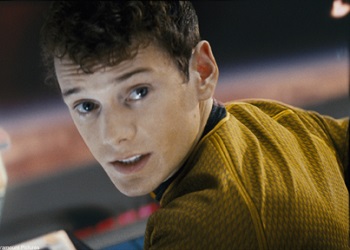 The ship's tactical officer and navigator. Despite being the youngest at only 17 (during the first film), he's capable enough in his field for even Spock to praise him. 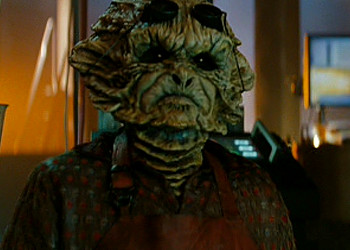 A Roylan engineer who's constantly hovering around Scotty. 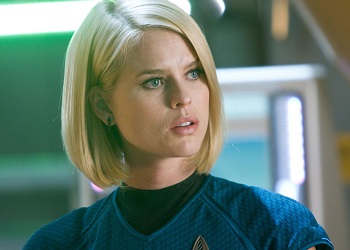 "You're much cleverer than your reputation suggests, Captain Kirk."
Played by: Alice Eve
Dubbed in French by: Emilie Alexandre

A science officer in Starfleet weapons R&D and daughter of Admiral Marcus. She joins the Enterprise on their mission to hunt down Harrison. 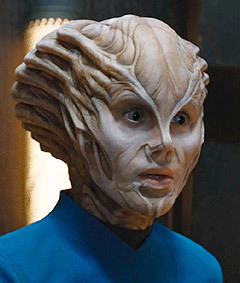 Played by: Melissa Roxburgh
Dubbed in French by: Marie Tirmont

An alien with an unusual skull. 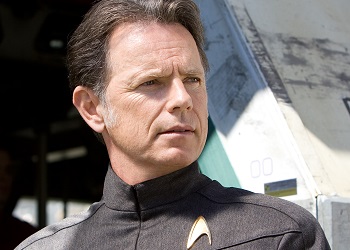 "Your father was captain of a Starship for 12 minutes. He saved 800 lives, including your mother's. And yours. I dare you to do better."
Played by: Bruce Greenwood
Dubbed in French by: Bernard Lanneau

The Enterprise's first captain, and later Admiral. He saw the potential in James T. Kirk for greatness and convinced him to joining Starfleet. Ever since, he's been constantly watching over him. 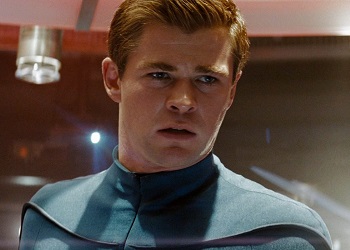 "Tiberius? You kidding me? No, that's the worst. Let's name him after your dad. Let's call him Jim."
Played by: Chris Hemsworth
Dubbed in French by: Axel Kiener

The father of James T. Kirk and first officer of the USS Kelvin. After the Kelvin came under attack by the Romulan mining vessel Narada and Captain Robau was ordered onboard for negotiations, Lieutenant Commander Kirk was made acting captain and placed in charge of the ship's evacuations. When Robau was killed and the Kelvin was too damaged to stay on autopilot, Kirk stayed behind to prevent the Narada from destroying the evacuation shuttles. Kirk rammed the Kelvin into the Narada, heroically sacrificing himself to save his wife, newborn son and 800 crew. 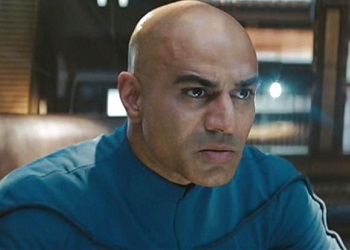 The Starfleet officer and the Captain of the USS Kelvin. When his ship came under attack by the Romulan mining vessel Narada and was heavily damaged, Robau was ordered by Nero to board the ship for negotiations. Robau placed Lieutenant George Kirk in charge and told him to evacuate the Kelvin if he didn't return in 15 minutes. He was later killed onboard the Narada by Nero himself. 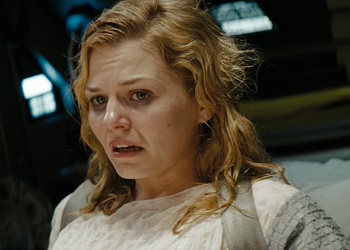 Played by: Jennifer Morrison
Dubbed in French by: Cécile d'Orlando

Jim's mother. She gave birth to him aboard a Kelvin shuttle as it was under Nero's attack. 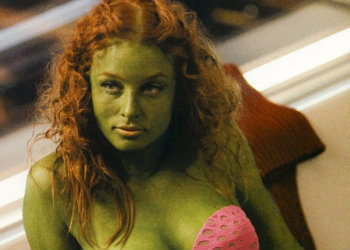 Played by: Rachel Nichols
Dubbed in French by: Marie Zidi

A Green-Skinned Space Babe Jim was involved with. Uhura's roommate at the academy. 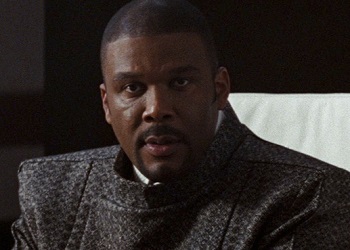 Played by: Tyler Perry
Dubbed in French by: Frantz Confiac 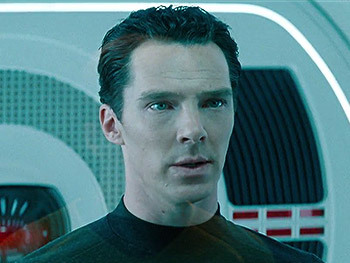 "You think you are safe. You are not."
Played by: Benedict Cumberbatch
Dubbed in French by: Pierre Tissot

Starfleet's top agent, before a perceived betrayal by his superiors sent him on a Roaring Rampage of Revenge against the entire Federation command structure.

His true identity, is Khan Noonien Singh, of Star Trek II: The Wrath of Khan fame, a genetically modified superhuman who had been awoken after centuries of cryosleep by Admiral Marcus and forced to develop advanced weapons. 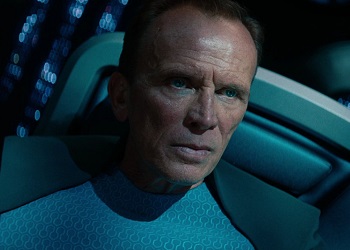 "In the names of those we lost, you will run this bastard down."
Played by: Peter Weller
Dubbed in French by: Jean Barney

The head of Starfleet and father of Carol Marcus. He personally organizes and preps the Enterprise on a black-ops mission to hunt down John Harrison and bring him to justice. 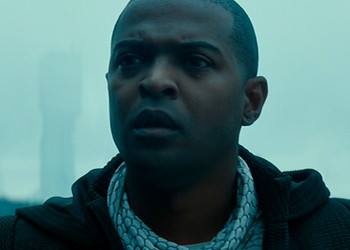 A Starfleet worker and family man who makes a Deal with the Devil with John Harrison to save his ill daughter.

The commanding officer of Yorktown Station, she reviews Kirk's application to the admiralty. 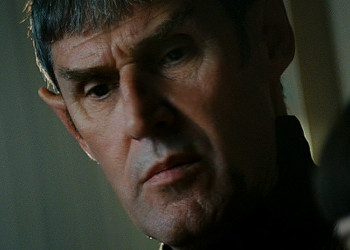 "Logic offers a serenity humans seldom experience. The control of feelings... so that they do not control you."
Played by: Ben Cross
Dubbed in French by: Gabriel Le Doze

A Vulcan Ambassador and Spock's father. Following Vulcan's destruction, he was one of the few survivors who made it to the Enterprise, offering his support to Spock in times of need. Following the events of the film, he together with Spock Prime establish New Vulcan in an attempt to preserve the Vulcan race and culture. 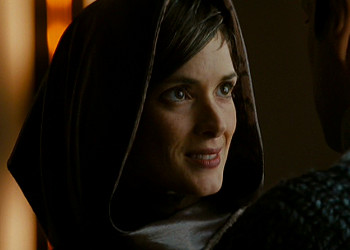 Played by: Winona Ryder
Dubbed in French by: Claire Guyot

Spock's human mother. Despite her marriage with Sarek being largely political to establish close ties betweeen Vulcans and humans, in truth the two truly loved each other and wanted to pass on that same compassion to Spock, if possible.

See his entry here for general tropes related to this character. 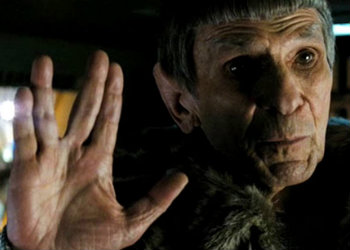 Spock from the original, "Prime" timeline. Attempting to save the galaxy from a supernova using a red matter-induced blackhole, he was whisked away over a hundred years into the past together with Nero, creating an alternate timelime with vastly different destinies as a result. He wanted to avoid having his presence known at first, but upon realizing that Vulcans were an endangered species in the new universe, he resolved to work together with Sarek to help rebuild their race. He refuses to allow his own personal experiences to influence this timeline; that said, he does make the one rare exception. 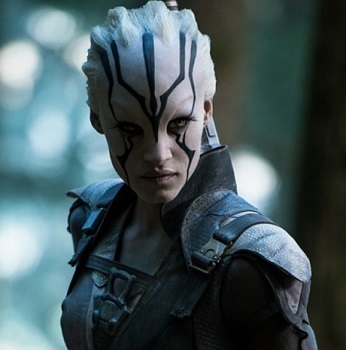 "Do not break my house!"

Dubbed in French by: Laëtitia Lefebvre

An alien whose family was stranded on Krall's planet by the Swarm. She and her people were captured by Krall for him to feed on, and her father sacrificed his life so she could escape.

Crew of the Narada 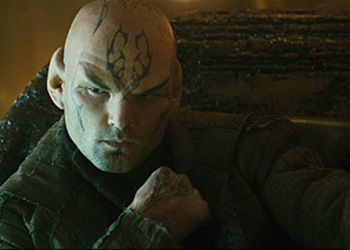 "We wait for the one who allowed our home to be destroyed, as we've been doing for 25 years."
Played by: Eric Bana
Dubbed in French by: Julien Kramer
"James T. Kirk was considered to be a great man. He went on to captain the U.S.S. Enterprise... but that was another life. A life I will deprive you of just like I did your father!"

A particularly troubled Romulan from the future who seeks to destroy the Federation to settle a vendetta he has against Spock, blaming him for the destruction of Romulus. 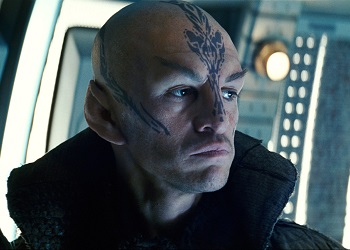 " I will speak for Captain Nero."
Played by: Clifton Collins Jr.
Dubbed in French by: David Kruger

A Romulan miner who acts as Nero's second-in-command. He's later killed by Jim Kirk when the latter shoots him with his own disruptor gun. 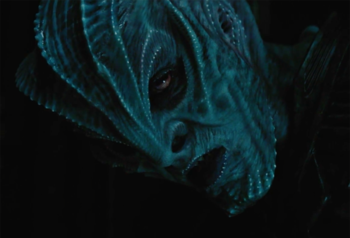 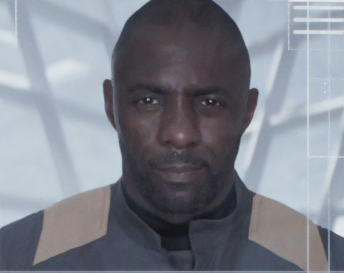 "This is where it begins, Captain. This is where the frontier pushes back!"
Played by: Idris Elba
Dubbed in French by: Frantz Confiac

An alien warlord who seeks to destroy Starfleet and the Federation.

Played by: Lydia Wilson
Dubbed in French by: Sybille Tureau

A survivor of the Swarm, discovered in a damaged lifepod coming out of the nebula near Yorktown.