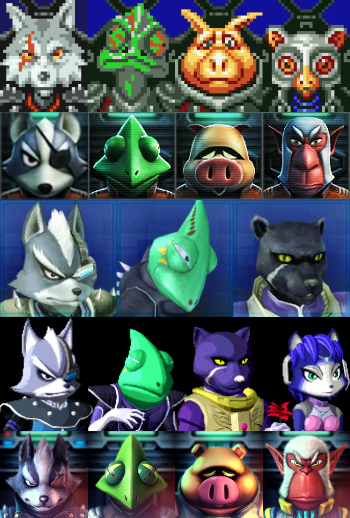 A rival mercenary team to Star Fox that appear in most of the franchise. Originally hired to aid the Venomian army during the Lylat Wars, since Andross's defeat they have operated as independent pirates. Most of their members are hardened criminals and/or psychopaths. Despite their differences, they teamed up with Star Fox to defeat the aparoid invasion, explicitly because the aparoids were a greater threat.

Star Wolf's first canonical appearance was Star Fox 2, the sequel to Star Fox. However, the game went unreleased until 2017 despite being complete in 1995. As such, the public's first exposure to them was Star Fox 64. As with Star Fox, the team roster is different in each timeline. 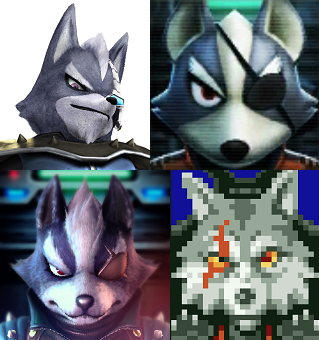 Wolf O'Donnell is the leader of the Star Wolf, and the perennial rival to Fox. Since their first encounter, Wolf has gained a grudging respect for Fox and come to his aid several times — though it's stated that Wolf only helps Fox so he can ensure he will one day take him down by himself. Wolf is known for his murderous temper and viciously animalistic fighting style. 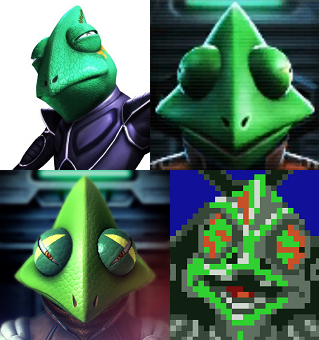 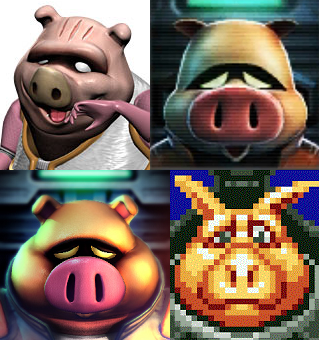 Pigma Dengar is a miserly hog who was a member of the original Star Fox team, but betrayed James to Andross and later joined Star Wolf. His overwhelming greed and unreliability got him kicked out of Star Wolf sometime before Assault. He tried to profit off of the aparoid invasion by stealing the Core Memory of a dead aparoid, but it corrupted him, and he became assimilated into the hive mind. He later returns in Command, having survived by keeping his consciousness in a giant cube. 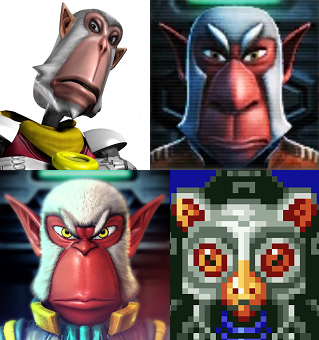 Andrew is Andross's nephew, and plays The Rival to Slippy. After Star Fox 64, he was forced out of Star Wolf, so he attempted to revive his uncle's empire in Assault. He appears again in Command, but as a subordinate of the Anglars. The original fourth member of Star Wolf in Star Fox 2 was a primate named Algy (possibly meant to be "Algae"); in Star Fox 64, this character concept was heavily redesigned as Andrew Oikonny (the Fan Translation of 2, however, renamed Algy "Andrew"). 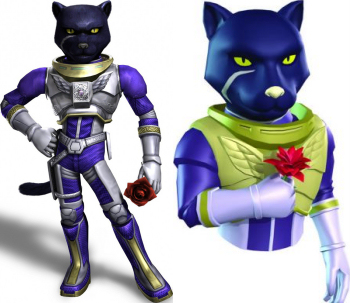 The newest member of the Star Wolf team who debuted in Assault. Panther Caroso is an unabashed ladies man who constantly hits on Krystal every chance he gets. He always carries his signature red rose. 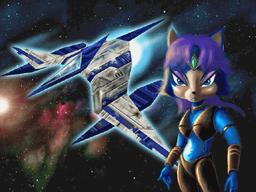 Krystal, as the Bounty Hunter "Kursed" in an ending of Star Fox Command.
In Star Fox Command, Krystal and Fox break up because Fox is worried for Krystal's safety. In response, Krystal joins Wolf's team and enters a relationship with Panther. Depending on the ending, she either leaves them to go back to Fox, stay permanently broken up or simply leave both to become a lonely mercenary.