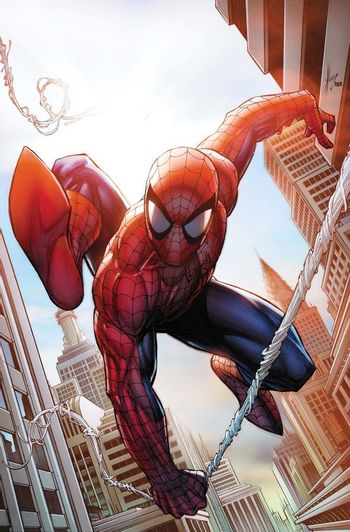 "Look out! Here comes the Spider-Man!"

Peter Parker was a shy, timid, asocial and bullied science genius, described as "Midtown High's Professional Wallflower". During a science exhibition with some isotope generators, a little spider was hit by radioactive rays generated in the middle of two arcs. This spider crawled away and bit Peter Parker before dying. In a short while, Peter found out, to his initial delight, that he had gained super-strength, the ability to crawl on walls and other abilities. He was also able to use his genius to create a special web fluid and a pair of web shooters. Peter, who lived with his Uncle Ben and Aunt May, attempted to use these abilities to get some money for his poor family, but he chose to do so by courting fame and celebrity as a professional wrestler and TV showman. His success went to his head and one night after a performance, he let a burglar escape after one of his shows, only for this same burglar to kill his Uncle Ben a few days later. After this tragic event, he vowed to dedicate his life to helping innocent people with his powers to atone for his big mistake and to honor his uncle's beliefs in justice and responsibility.

Peter's life since then has been full of ups and downs. He graduated from high school to college, he worked at the Daily Bugle as a freelance photographer for his boss J. Jonah Jameson who just happens to despise Spider-Man. He has fallen in love with a few girls, dating Gwen Stacy, Mary Jane Watson, and Felicia Hardy, before marrying Mary Jane for twenty real-time years until a retcon. He has graduated college but has yet to fully escape grad school and complete his thesis. In addition to photographer, Peter has worked several small time jobs, before working for extensive periods of time as a high school teacher, a scientist for Horizon Labs, business owner of Parker Industries.

He has even been dead a few times, one of which involved him getting organic webbing for a while. More recently (2010-2019), he had a "death" with the Superior Spider-Man hijacking his body for a year and a half during which Otto, in Peter's body, started a company called Parker Industries and completed his graduate thesis under false circumstances. This company offered Peter success and fame for a while, though typically, Peter refused to draw a big salary from the venture, and eventually said period of success was overturned, and Peter returned to his mid-20s struggling self around the time of Nick Spencer's Spider-Man.