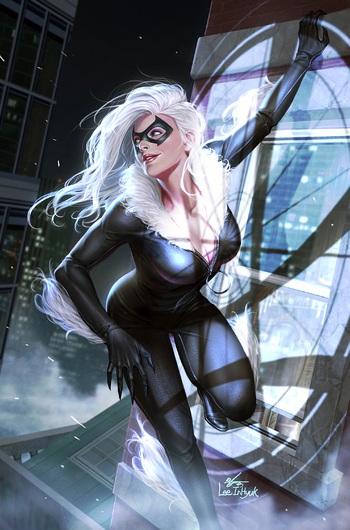 Former cat burglar Felicia Hardy became a crime fighter when she became romantically attracted to and involved with Spider-Man. Felicia has the ability to instill "bad luck" around others - this comes in handy when fighting crime! 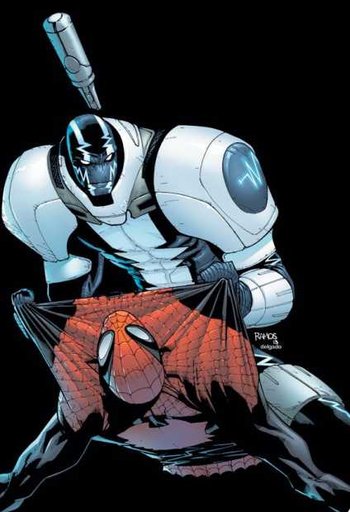 When his older brother died of an incurable disease, Elias Wirtham dedicated himself to medicine, intending to save lives in honor of his brother's memory. Later, Wirtham discovered that a pharmaceutical company had developed a drug that could have saved Joshua's life but chose to withhold it as it wouldn't have been profitable to release it at the time. Angered and disgusted that his brother and so many others had died because of corporate greed, Elias subjected himself to experiments that replaced his heart with a beta particle reactor, and fused a Vibranium mesh into his skin. Assuming the costumed guise of Cardiac, he set out to avenge the deaths of innocents at the hands of individuals who were untouchable by the law. 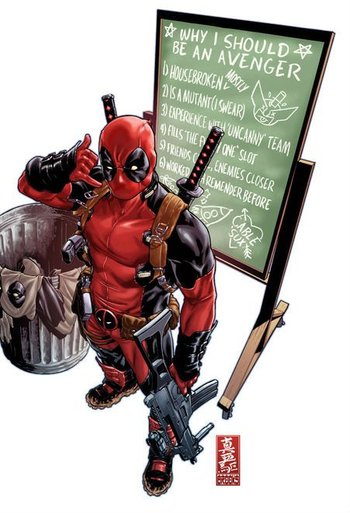 Wade Wilson is a former test subject of the Weapon X program, where he received his regenerative healing factor through the scientific experiments conducted upon him. Deadpool's powers and personality traits combine to make a wild, mentally unstable, and unpredictable mercenary. Deadpool has been a member of X-Force and the Thunderbolts, and a self-professed member of the X-Men and the Avengers. The "Merc with a Mouth" is infamous for breaking the fourth wall. 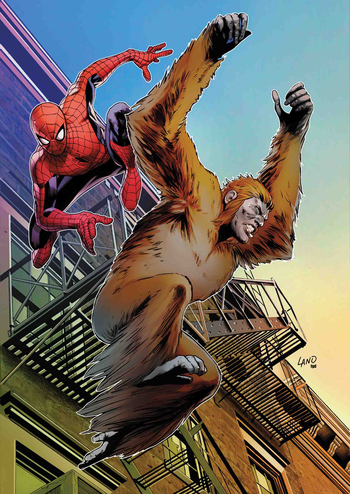 The Gibbon's unsuccessful attempts as a criminal and a hero branded him a loser. As a mutant, he retained his powers after "M-Day." 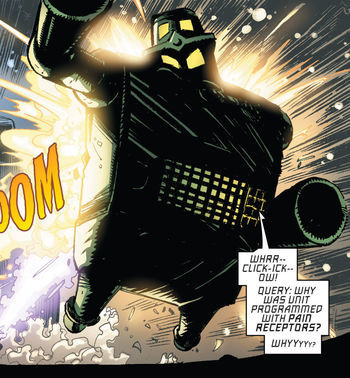 "Whrr—click-ick—ow! Query: Why was unit programmed with pain receptors? Whyyyyy?"

Intended to be the ultimate mobile supercomputer capable of answering almost any question, the Living Brain was brought to Midtown High by its creator for a demonstration of its abilities; two workmen, thinking they could make a fortune by using the Brain to predict the outcomes of sporting events, attempted to steal it, damaging it in the process, and causing it to go haywire until it was shut down by Spider-Man. The Living Brain project was subsequently scrapped, and the prototype was placed in storage, where it fell into disrepair.

Years later, a bullied youth uncovered the Brain, upgraded it, and sicced it on the jocks who had been bullying him. Spider-Man, who was visiting Midtown High as Peter Parker, fought the Brain again, this time defeating it via electrocution. Afterward, the Brain changed hands several times, going from a pair of thieves, to the Beyond Corporation, to the Grandmaster, and finally to Boomerang, who inducted it into his Sinister Six. After defeating the Sinister Six, the Superior Spider-Man confiscated the Brain, and employed it as an assistant up until Peter Parker reclaimed his hijacked body from Doctor Octopus. The restored Peter kept the Brain around as an assistant, not realizing it contained a backup of Doctor Octopus's mind. 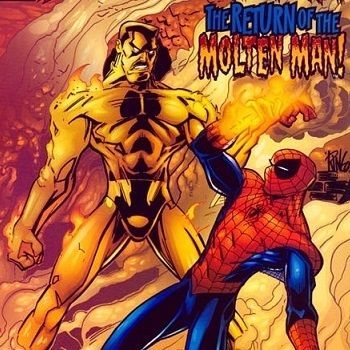 Mark Raxton wanted to get rich. Working hard, he developed a special liquid metal alloy, but his partner, Spencer Smythe, wanted it to be tested more. In a brief scuffle, the container holding the alloy broke, spilling the liquid over Raxton. Instead of poisoning him, his skin absorbed the alloy, making Raxton strong enough to buckle a car hood. While he started off as a criminal, he eventually accepted his transformation, and even reconciled with his sister Liz Allan. 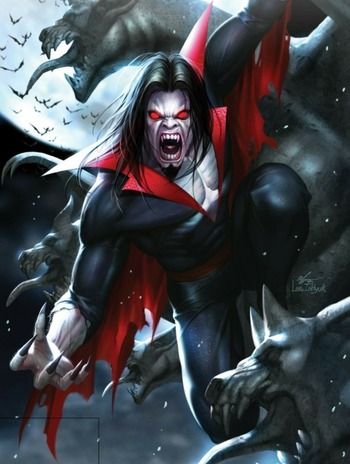 Once Michael Morbius was a world-renowned bio-chemist, dying of an unknown blood disease and desperately searching for a cure. He found that cure, but, in turn, it afflicted him with a curse far worse than any possible disease; the curse of the blood-sucking night-beast; the curse of the Living Vampire. 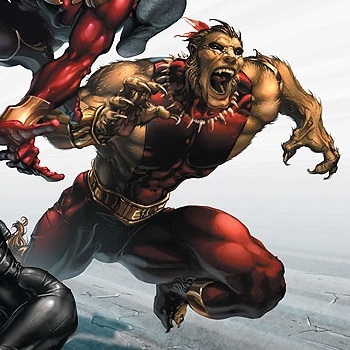 "When the tribe call—Puma must answer!"

Puma is a powerful Native-American Werecat. Puma was raised to fight the Beyonder and became an ally to Spider-Man. 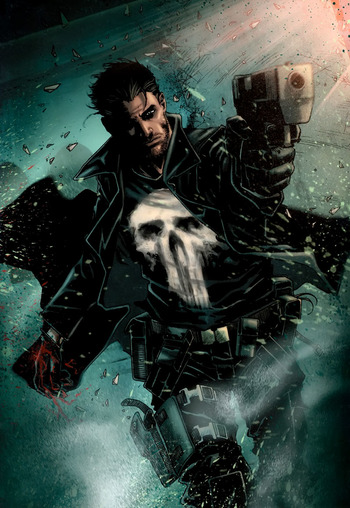 When U.S. Marine veteran Frank Castle's family's was murdered for witnessing a mob hit, the man vowed to avenge their deaths and became a one-man army in his personal war against the criminal underworld. With a distinct death's head skull adorning his chest, Frank Castle became the vigilante known as the Punisher. 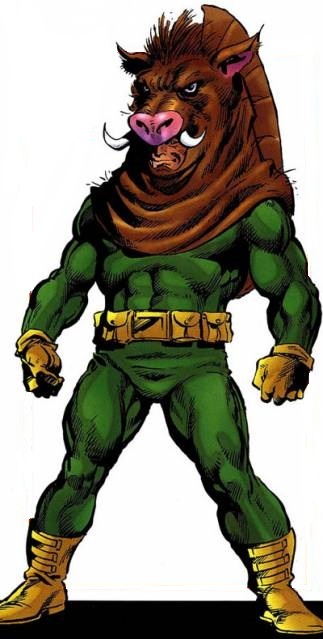 Razorback was a mutant with the innate ability to drive any vehicle instinctively. He was de-powered as a result of M-Day. He employed many gadgets in his crimefighter career. 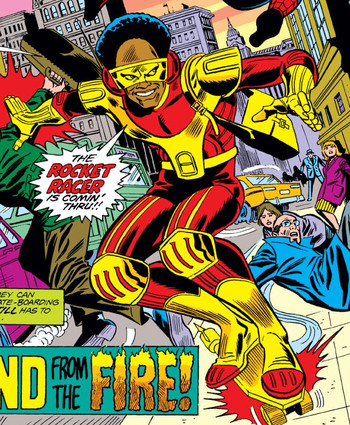 Robert Farrell was a misguided youth, stealing to feed his hungry family. After several confrontations with Spider-Man, he has since learned the errors of his ways. 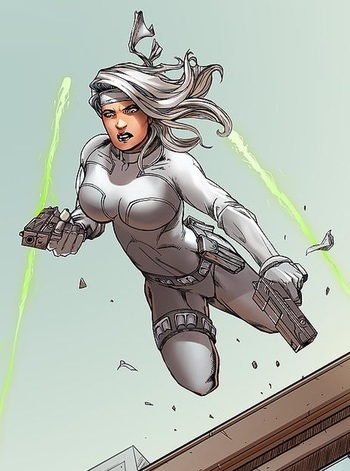 Paladin: I still can't believe you're doing this as a freebie!
Silver Sable: My father started the Wild Pack to rid the world of Nazi war criminals. I swore to uphold his dream of a free world.

A well-known female mercenary, she's been both an ally and a foe to the webslinger. Joining the Wild Pack at the age of seventeen, Silver Sable served as second-in-command until the death of her father, Ernst Sablinova. Based in Symkaria, a tiny country sharing a border with Latveria, the Wild Pack began offering its services internationally under Silver Sable's leadership. Eventually gaining approval from the Symkaria government, the Wild Pack would become one of the country's largest economic contributors. 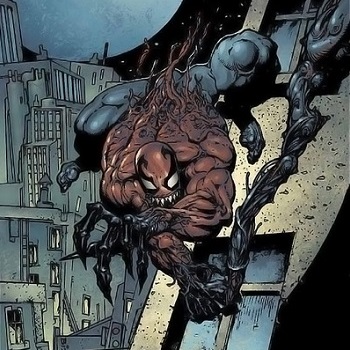 I do know where I am headed. I know only that I cannot take the ones I love most with me. I have within me a creature called Toxin. I will try to use it for good. I have left my old life behind. Now, I must model myself on Spider-Man. I must learn to control what I have. Whatever happens, whatever monsters come my way, I must never forget who I am, where I come from. I must do the right thing.

Patrick "Pat" Mulligan was an NYPD police officer who had the misfortune of running across the supervillain Carnage, who had just spawned a baby symbiote. Too weak to kill them, Carnage bonded the infant symbiote to Patrick and left, intending to kill them once he regained his strength. When the symbiote matured, Venom named it Toxin, but when he realized that not only was it more powerful than both himself and Carnage combined but that it was unlikely to aid him in his crusade against Spider-Man, he joined with Carnage in trying to kill it. Pat accepted his bond with the symbiote and joined forces with Spider-Man and Black Cat in defeating them, and on a number of other occasions, leaving his family behind in order to tame the symbiote, eventually succeeding after stopping himself from killing Razorfist, who had killed Pat's father. Pat made a deal with the infantile symbiote: in exchange for complete control of its powers, it could take over his body for two hours a day, provided it didn't commit crimes. Pat was listed as one of the Civil War Initiative's potential recruits, but was ultimately beaten to death in a gutter by Blackheart, who stole the symbiote. The Crime Master later re-stole the symbiote and bonded it to Eddie Brock, who was initially taken over by the symbiote but later made a deal with it to return to his Lethal Protector lifestyle.

See Venom
Will o' the Wisp

Will O' the Wisp

Jackson Arvard worked as a scientist in the Roxxon Energy Corporation's electromagnetic research division. Arvard was under constant pressure from his boss, James Melvin, to produce results or lose his job and as a result worked himself to the point of getting little sleep. This ultimately resulted in him getting caught in an accident at work involving a new electromagnetic device he was working on. Arvard discovered that the electromagnetic attraction between his molecules had been weakened, threatening his life.

Desperate, Arvard turned to Dr. Jonas Harrow, the scientist who operated on Hammerhead and gave him his metal skull. Instead, Harrow used a device on Arvard that placed him under the scientist's control and made him perform numerous robberies which led to him becoming in conflict with Spider-Man. With Spider-Man's aid, Arvard freed himself from Harrow's control and used his power of hypnosis to to get Harrow to confess to his crimes.