Liz Allan is one of the first romantic interests for Peter in the Midtown High School. Unfortunately (or fortunately) for Peter, she is Flash Thompson’s girlfriend at the time and thinks next to nothing of Peter. However, after she hears an ailing Peter had donned a Spider-Man costume in order to save Betty Brant from Doctor Octopus, she develops a crush on him and clashes with Betty Brant. By this time, however, Peter's interest has waned considerably, as he notes that Liz never showed any real interest in him until he began dating Betty Brant, and assumes that Liz's feelings are little more than a schoolgirl crush. At the graduation ceremony, Liz admits her feelings to Peter, and says she has come to accept the fact that they are unrequited. 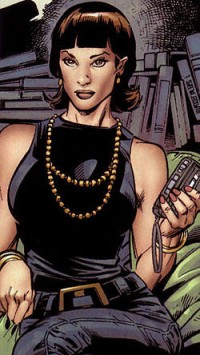 Peter's first girlfriend. She starts off as Jameson's personal secretary, a position she took after her mother's death, which made her drop out from high school. She starts dating Peter shortly after he starts selling pictures of Spider-Man to the Bugle, attracted to his serious and formal, yet sweet demeanor.

However, Peter's life as Spider-Man started to put a heavy strain on their relationship, especially after her brother got killed by accident during a showdown with Dr. Octopus. Eventually, they break up, although they stay on friendly terms and their relationship evolves into a more sibling-like one. A few years later, she marries Bugle reporter Ned Leeds, who at first looked like he could provide Betty the quiet, uncomplicated married life she was looking for. However, her marriage is a bumpy one due to Ned's constant work overseas, and she leaves him during a long assignment in Paris. Feeling alone, Betty tries to get back together with Peter, who at the time had just broken up with Mary Jane (for the first time), but Ned follows her back to New York and puts a stop to it.

Eventually, she manages to work things out with her husband and save their marriage, but their life together gets utterly destroyed during one of the first Hobgoblin sagas, in which Ned died and Betty almost went insane. However, she was able to recover; after that she decided to become a journalist herself.

Currently, she's one of the Bugle's boldest reporters and has a relationship with Flash Thompson. 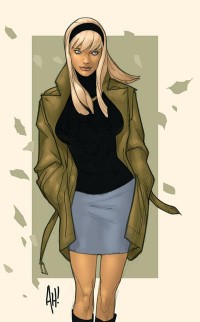 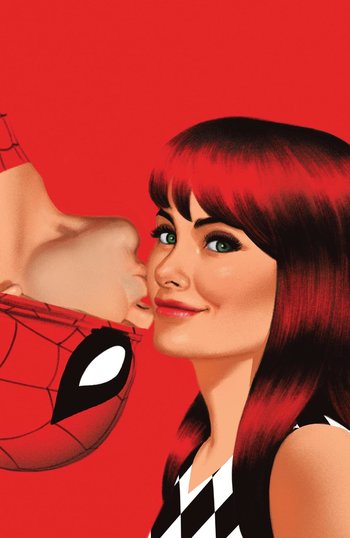 Mary Jane (or MJ) is the most famous love interest of Peter Parker. She was his wife until One More Day retconned this (in other universes, like MC2 universe or Renew Your Vows, they are again married). See her personal page.

A university secretary who became one of Peter Parker's love interests for a while. 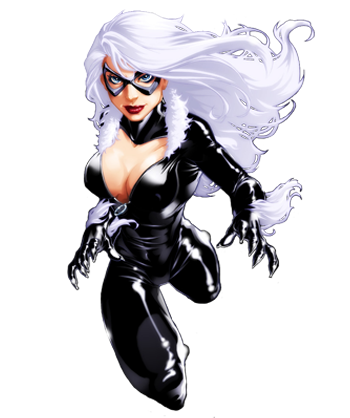 In her backstory in Spider-Man/Black Cat: The Evil That Men Do, it's revealed that she was raped by her boyfriend Ryan when she was a freshman at Empire State University. Hating the idea of being a victim, she trained herself in various fighting styles and acrobatics, intent on killing her rapist. Finally, after months of preparing, she set out for revenge, but before she could find him, Ryan was killed in a drunk driving accident. Furious that she was denied the chance for revenge, she decided to utilize her new skills to follow in her father's footsteps. After amassing a fortune in stolen items, Felicia adopted her costumed identity. 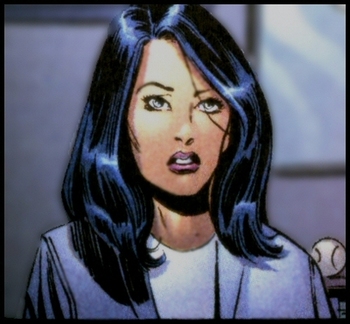 The cousin of the late Gwen Stacy, Jill moved to New York City from Hong Kong with her father and brother, Arthur and Paul. She befriended Peter (Spider-Man) and Mary Jane Parker, taking classes with Mary Jane at Empire State University (ESU). Jill sought to understand the events surrounding Gwen's death, and though hesitant, Peter eventually told Jill his side of the story. 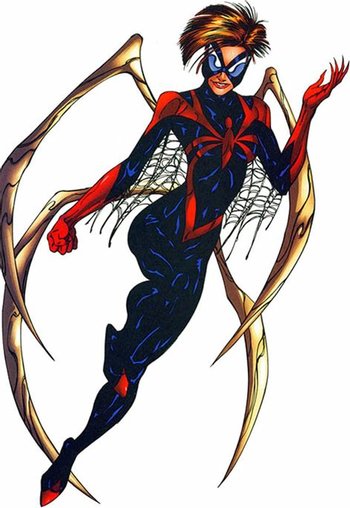 The niece of J. Jonah Jameson and Spider-Man fangirl, Martha "Mattie" Franklin obtained super powers from the Gathering of Five and became the third Spider-Woman. She temporarily took Spider-Man's place during one of his brief periods of retirement, and became the third Spider-Woman with the blessing of Jessica Drew. When Mary Jane was assumed dead, Mattie attempted to initiate a romantic relationship with Spider-Man, but was turned down. 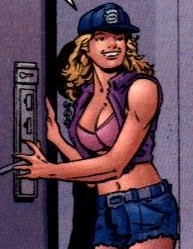 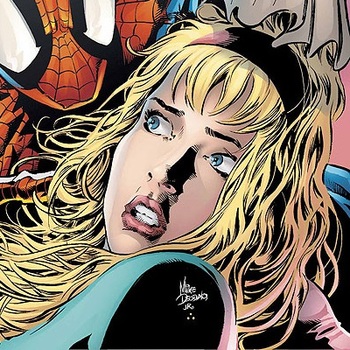 The daughter of Gwen Stacy and Norman Osborn. She and her twin brother Gabriel were raised by "Uncle Norm" to believe that Peter Parker was their father and had killed their mother as Spider-Man. Trained as assassins, Sarah and Gabriel attacked Peter and eventually learned the truth about their mother's death. While Gabriel became increasingly insane, Sarah was outraged and turned against her father, fell in love with Peter herself, and became an Interpol agent. 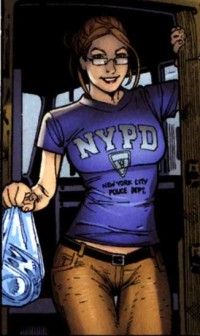 Carlie Cooper is a forensic specialist who is a friend, since high school, of Lily Hollister. She is one of the first potential romantic interests for Parker after "One More Day" and eventually becomes his girlfriend for a time.

Michele Gonzales is the older sister of Vin Gonzales who went to represent her brother in court. Later, she becomes Peter Parker's roommate and a potential love interest. She is a criminal defense lawyer and is known for her volcanic temper. 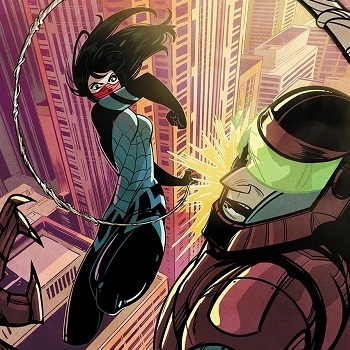 "My name is Cindy Moon. Intern by day. Super hero by night. Actually, I fight crime by day, too. And I also intern by night—you get the idea. Ten years ago, I got bit by a radioactive spider. See Previous, Re: Super Hero. Shortly after that fateful bite, I was locked inside a windowless bunker. For ten years. I did it to keep my family safe. To keep everyone safe. Safe from jerkstones like Morlun and his family. But now that threat is gone."

During the Original Sin storyline, Spider-Man would be exposed to the energies of the Watcher's eye alongside his fellow heroes. As secrets began to flow into his head, Spider-Man saw that the radioactive spider that bit him managed to bite another before it died—a young female student named Cindy Moon.

After she was bitten by the spider, Cindy's abilities manifested but she was unable to control them. Some time later, Ezekiel Sims would approach the Moon family to offer his help and guide Cindy in controlling her newfound abilities. After six years since getting bit and training to use her powers, Cindy is locked up inside a facility by Ezekiel to protect her and the other "spiders" from Morlun and his family: The Inheritors. But she was later freed by Peter Parker, kicking off Morlun's biggest hunt ever. 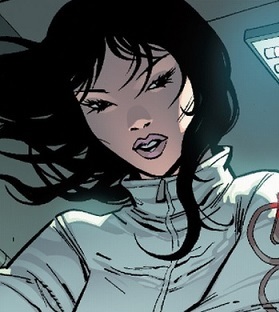 Designer and Mechanic of the the Spider-Mobile and former girlfriend of Peter Parker. 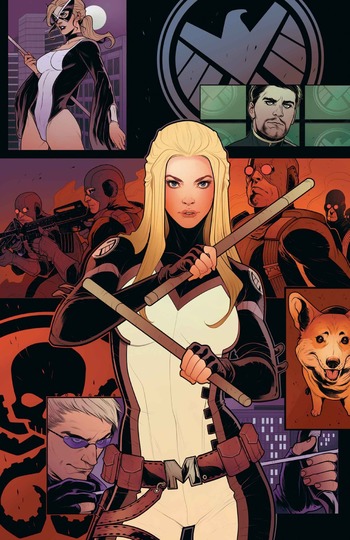 Barbara "Bobbi" Morse alias Mockingbird is an agent of S.H.I.E.L.D. and ex-wife of Hawkeye. In the All-New, All-Different Marvel branding, she helps Spider-Man when they pursue the new Zodiac and they develop a bond.