As usual with character pages, SPOILERS AHEAD!!!! 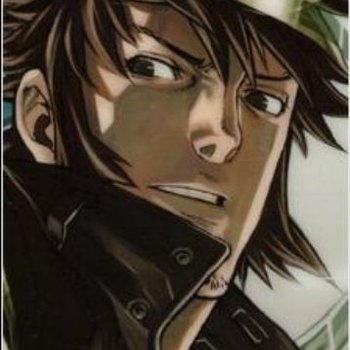 An Intrepid Reporter who used to be a war photographer and is renowned for the quality of his shoots. An interesting byproduct of his job is that he is sexually aroused by taking his photos. Despite being jaded and cynical, he is still passionate about his job and works for a regular magazine. It's during an infiltration mission that he sets foot in the Roppongi Club, a depraved secret society of wealthy hedonists whose primary goal is to indulge in their basest desires.

He ends up captured and is given a Spit-Trail Kiss by a hypnotized young girl named Kagura Tennozou, the club's "Goddess" whose ethereal beauty captivates him instantly. He was supposed to die, but the kiss triggered the "Euphoria Factor" in him instead. Apparently a latent gene that only people known as "Euphorics" have, this virus know grants him the power to make the targets of his photo shoots explode and makes him practically invulnerable to conventional injury. Using his newfound abilities, he escapes, taking Kagura as a hostage.

Both quickly grow close as Kagura comes to her senses. She realizes just what had been done to her and breaks down in tears, begging her abductor to take her away with him, and considering how fucked up her life has been until then, she's got all the reason in the world to wish for that. Saiga decides to free Kagura from the Roppongi club and her unkind mother's clutches. 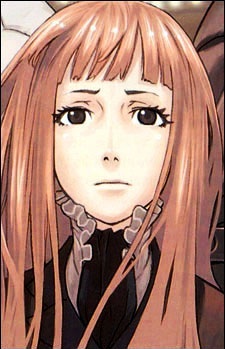 A sweet, demure and innocent young girl who lives sheltered in a high skyscraper in Tokyo. Abused and mistreated by her horrible mother, she still endures it quietly, hoping that one day her courage may pay off and that her mother might grow to genuinely love her. Besides this, she is unwittingly the object of worship of the depraved secret society of Roppongi and is known as "The Goddess".

When Saiga abducts her to save himself, she eventually realizes how she's been manipulated and used by her entourage and begs Saiga to take her away with him. Captivated by the purity of Kagura, he complies.

Kagura's growth has been artificially stunted so that she may not lose her catalytic powers that trigger the Euphoria virus in the carriers of the gene. Since she is under constant medication, she also runs a risk of dying if she doesn't go through intensive rehab due to how intoxicated her body is with the drugs she was force-fed back in the days. 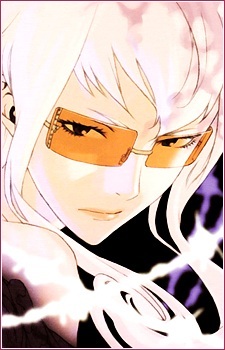 A very proactive, sultry and shrewd Rabid Cop, Hibari is also Saiga's Stalker with a Crush who wants to have him for herself. Dressed in a red jumpsuit to highlight her knock-out body, she uses her golden-plated guns as a weapon and is far from being a by-the-book cop.

Able to hold her own in a fight, she usually doesn't hesitate to use physical force to get the info she needs and isn't big on morality either. Seeing Kagura as a wedge between her and Saiga, she coldly gives her back to her horrible mother in exchange of having her way with an unconscious Tatsumi.

Despite her initially obstructive behaviour, she eventually becomes intrigued with the Roppongi club and eventually understands that her enemy isn't necessarily the one she believes... 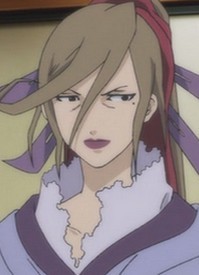 The ruthless, domineering and abusive mother of Kagura. A former actress who used to have some success back in her prime, she is now the head of the Tennozu Foundation, a powerful financial company that oversees the political and monetary landscape of Japan, often corrupting politicians and businessmen through the promise of indulgence in their basest desires in the Roppongi club.

She is involved with Suitengu and unapologetically indulges in her lustful desires with him. Still good-looking for a woman her age, she doesn't waver in personally corrupting those who may obstruct her schemes or who just want to protect her daughter from her.

A mysterious and enigmatic figure, known to the public only as the right hand man of Shinzen Tennozu. To the wealthy and powerful, he has another side, that of the master of the ultra-exclusive Roppongi Club, a black club where the elite can satisfy any fetish, perversion or delight they may have, no matter how depraved or the cost in human life. A Euphoric, Suitengu's power is to manipulate his own blood.

Tsujido, Makabe and Niihari are Suitengu's most loyal minions, a trio of gangsters he rescued from death at the hands of their superiors when he coincidentally chose to kill off those superiors so that he could take over their turf. Tsujido, noseless from the incident, is also a Euphoric; his fetish for smells has given him an incredibly sharp nose and the ability to track people by scent.

Kikukawa is Shinzen Tennozu's right-hand woman, confidently handling any tasks her mistress presents her with and content to stay in the background.After Shinzen's death and Suitengu's takeover, she transfers her loyalty to Suitengu.

Euphorics in General
Every single Euphoric we see barring Saiga is a part of the Roppongi Club, and it shows. All of them go after Saiga at some point or another.
Katsuya Shirogane 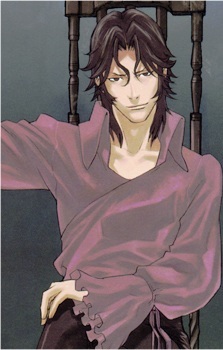 A great ballet dancer, but obsessed with flexibility (and, by extension, rubber) to the point of insanity. First seen breaking a would-be pupil's arm for not being flexible enough, he later becomes the first Euphoric to be seen in the series. His power is to become living rubber, a talent he uses to serve as an assassin for the Roppongi Club. 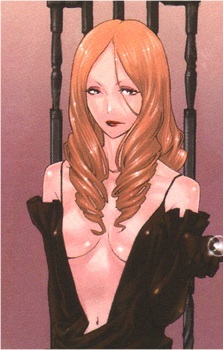 The second Euphoric sent after Saiga to recapture Kagura. She is quite literally Made of Diamond, as this is her Euphoric Power: to turn her whole body into diamonds. A side effect (or cause?) of this is that she is quite addicted to diamonds, eating them by the dozen. 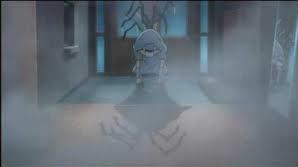 A monstrous dentist who enjoys seeing people he works on writhe in agony. His Euphoric Power takes the fetish he has for teeth and translates it into spider-like surgical tool tentacles from his back, and more from his jaws and tongue. 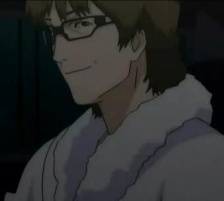 An esthetician with the power to bring his tattoos into reality, and "infect" other people by transferring them into their bodies. 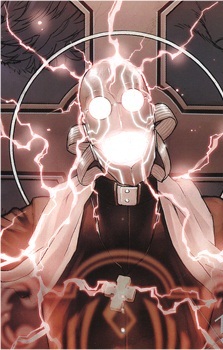 A corrupt Priest, who was found out to have given all of the Church's donation money to the Roppongi Club to pay his Membership dues, Father Kanda is a Euphoric who had the power to control electricity. He can also transform into wires and control thunder bolts. He believes he is a God, due to his powers. 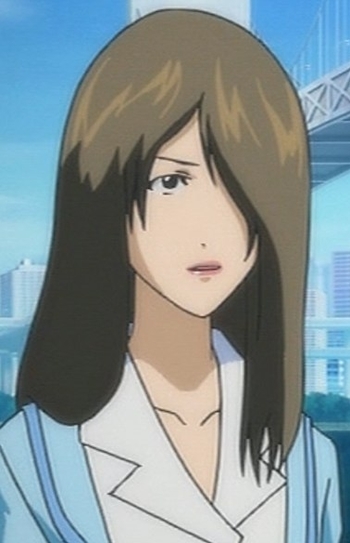 One of the Roppongi Club's assassins, a Euphoric with the power to manipulate water and turn herself into a mermaid-like creature. 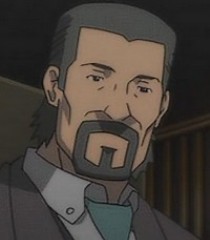 A former photographer, Seiji Ochiai is now a cabinet member who leads a group called the White Eagles whose purpose was to bring down the Prime Minister and Suitengu. 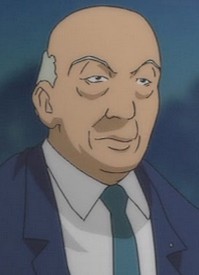 The Prime Minister of Japan, and involved in the Roppongi Club up to his eyeballs, with plans to seize control of the club from Suitengu and place it under government control. A Euphoric, his fixation on food and eating gave him the power to mutate into a huge head-creature with acidic saliva, so he could more easily eat anything he pleased. 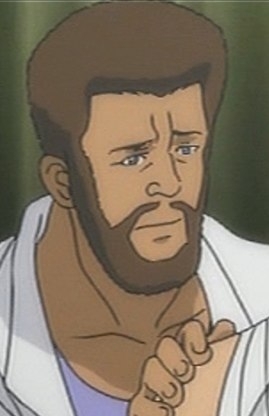 A flamboyantly gay American man whose passport was invalidated, trapping him in Japan, Bob runs a massage parlour out of his apartment and lives in the same building as Saiga. The two are friends, and Bob is a good person, so he regularly tries to help Saiga as he gets more caught up in the mess with Suitengu and his Roppongi Club. Bob has a sister (a Transgender woman named David, who runs "Le Pub David", a cabaret staffed by trans women. 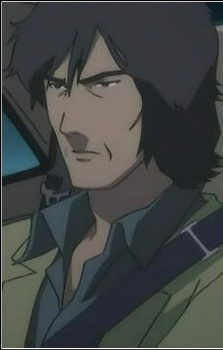 A doctor that was responsible for operating on and saving the life of Saiga after he was pulled from the rubble of the bioweapons lab where he unknowingly contracted the Euphoria Virus. Afterwards, he got married and settled down in a private clinic in Japan, until his wife died of cancer. After Saiga becomes a Euphoric and rescues Kagura, he comes to Genba for assistance in finding out what is wrong with the both of them.

David is a trans woman and Bob's sister. She runs a dance show parlor staffed with other trans women, and they support Saiga and Kagura for a short time. They also quickly stand up to the Euphoric Kagonei when she attacks.

Chief Ekoda and the Piano Teacher 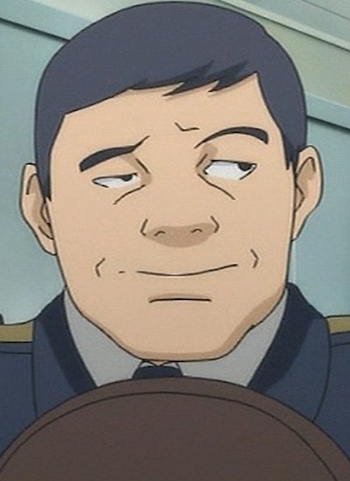 Though entirely unrelated, these two share some disturbing habits: severing and collecting body parts. For Kagura's Piano Teacher, it's hands, while for Ekoda, it's legs. Ekoda is not a Euphoric; whether the pianist is one is never expounded on.