The residents of 23 Meteor Street are an... interesting lot. Here's all about them. 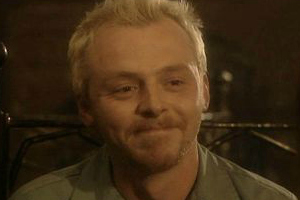 "As far back as I can remember, I've always wanted to be a graphic artist. And one day soon, I will be."

Tim, rarely seen without his skateboard, his Chocolate beanie, or his PlayStation controller, is an aspiring comic book artist, amateur skateboarder, and passionate follower of cult fiction in many forms, including video games, science fiction, and especially - at least initially - the original Star Wars trilogy. 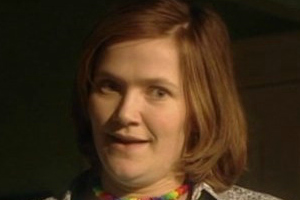 "Oh, sorry, I thought you were a drug dealer!"

Daisy is an aspiring writer, although she tends to spend most of her time actively avoiding doing any writing - or any other actual work for that matter. Whereas Tim is often grouchy and sour, Daisy is sunny, enthusiastic and cheerful, and at times overwhelmingly so. She can also be aggressive and confrontational at times, as demonstrated when she joined an employment agency only to lose most of the jobs she was assigned through her negative attitudes. 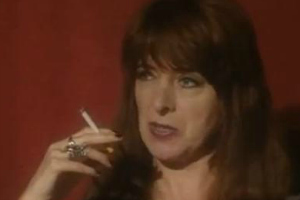 "Hullo, it's me. The weirdo from upstairs."

Marsha, the permanently sozzled landlady, is never seen without a lit cigarette in one hand, and a glass of red wine in the other. Once a promising young athlete, she retired from athletics after receiving a leg injury and became a groupie instead, resulting in several marriages that ended bitterly and a teenage daughter, Amber, with whom she is near-constantly arguing. She passionately lusts after Brian, an attraction which stems from a hazy, torrid incident in the past where rent negotiations became somewhat more sensual than usual as a result of Brian's sheer poverty. She is utterly delighted to have new, young friends, which is slightly awkward, as she's the only one who does not know that Tim and Daisy are not actually a couple. 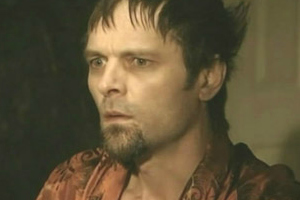 "I see contemporary art as a dirty plate heaped with worthless junk food and I want something more nourishing."

The lodger in the flat below Tim and Daisy's, Brian is a rather bizarre and somewhat angst-ridden and pretentious artist. Quietly spoken and intense, Brian gives the impression of being almost psychotic and sociopathic; in fact, he's just very shy and timid. His main artistic drives are anger, pain, fear and aggression, and his art is, according to him, 'a bit more complex' than watercolours. 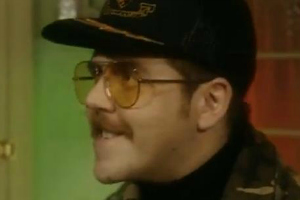 "Sergeant Mike Watt, TA. It's the longest way up, shortest way down."

Mike is Tim's best friend. He wishes dearly that he could join the British Army, but unfortunately is ineligible owing to the detached retinas he received following a painful childhood accident when jumping from a tree after being egged on by Tim, and as must console himself with membership in the Territorial Army instead. The first series revealed that Mike had been thrown out of the TA because he stole a Chieftain tank and tried to invade Paris with it while on weekend manoeuvres in France. 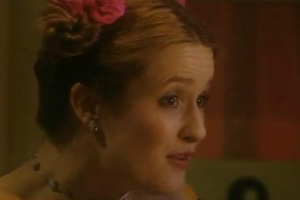 Twist, Daisy's best friend, is (in the words of Tim) either 'sweet and stupid, or an evil genius'. She 'works in fashion' (i.e. a dry cleaner) and is an atrociously superficial 'fashion fascist'. She is prone to giving backhanded compliments to Daisy, particularly about her size, weight or clothing choices.

Colin is Daisy's dog, a Miniature Schnauzer, bought from a dogs' home where he was shortly due to be put down, to cheer Daisy up after she is dumped by her boyfriend Richard. He is named after the cardboard box Daisy played with as a child when she wasn't allowed to have a real dog.

Sarah is the ex-girlfriend who broke Tim's heart by leaving him for his friend, Duane, and kicking him out of their flat. Sarah is a rather antipathetic person, feeding her own vanity with Tim's lame attempts to get her back, while, at the same time, ruthlessly ignoring him.

Daisy's boyfriend. Their pet names for each other are "Daisy Duke" and "Boss Hogg". They are in a long-distance relationship (he lives in Hull) but he later breaks up with her over the phone after she confesses to having cheated on him. 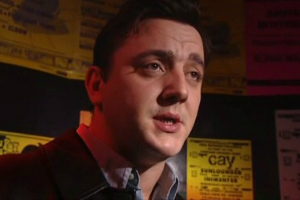 "Hi, Dom. This is Duane Benzie. How you doing?"

The gravelly-voiced back stabber who stole Sarah away from Tim. He was Sarah's boss and Tim's good friend until Tim learned of their affair.

Marsha's bratty teenage daughter. She and her mother constantly argue and the arguments always end with Amber storming out of the house. The sound of Amber leaving becomes a cue to Tim and Daisy that Marsha will come by wanting to talk. 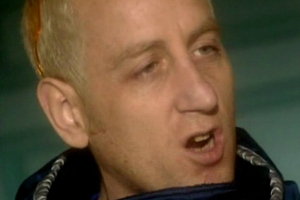 A Northern Irish bike messenger and a friend of Tim and Mike's. He is a raver and everyday noises such as a phone ringing, or a car horn honking, sound like rave music to him, often prompting him to start dancing. The raving and the drugs also make him prone to hair-trigger mood swings. Tyres possesses a very short attention span and is easily distracted.

Tim's boss at the comic book store, "Fantasy Bazaar". He explains to Tim the story of Gramsci, the dog that attacks only the rich people on Hampstead Heath. At one point in series 2, Bilbo fires Tim for his inability to get over his dislike of The Phantom Menace, but later begs him to return, inspired by Tim leaving a message begging him to do so on his answer-phone. He once beat up his dad for saying Hawk the Slayer was rubbish.

The head of Dark Star Comics, the company that Tim desperately longs to work for. When Tim first submitted his portfolio, Damien laughed him out of the office. Since then, Tim has been haunted by visions of Damien laughing at him, and is afraid of submitting a new portfolio to him.

Damien's beautiful assistant who helps Tim get hired at Dark Star. They immediately begin dating and have a fun relationship, provoking jealousy in both Daisy and Mike.