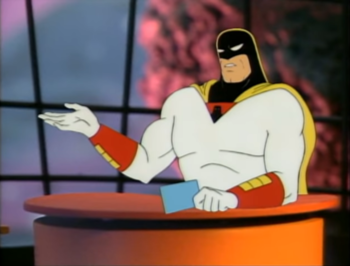 "Greetings! Are you getting enough oxygen?"
The self-centered host of the show, Space Ghost is a former superhero who's since taken on the talk show wars. 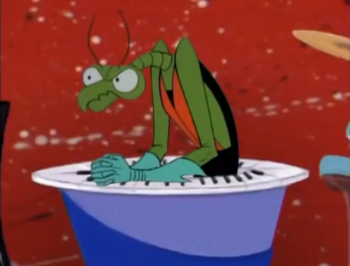 "Everytime I move my arm, it costs the Cartoon Network 42 bucks! MUHAHAHAHAHAHA!"

An enemy of Space Ghost's he has since enslaved, Zorak serves as the show's bandleader. And main source of outward disdain. 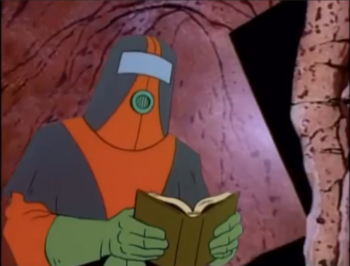 "I'm on break."
Another enemy of Space Ghost's he has since enslaved, Moltar serves as the suffering director of the show. Usually only seen in his control room. Later served as the first host of the CN action-adventure block Toonami, before passing the reins onto the various TOM robots.
The Council of Doom

The Council as a Whole

A Five-Man Band formed of Space Ghost's other villains, they make periodic appearances on the show.

A weird alien, even by SG standards, Brak makes sporadic appearances and usually demonstrates a lack of intelligence.

Another insectoid villain with a cultured streak.

A fellow "helmeteer" of Moltar's, Tansit generally introduces the show and gets humiliated in the process.

A spider-themed villain with a rather shrill voice.

As Space Ghost's evil twin, Chad sometimes makes appearances in an attempt to ruin his brother's life. Amusingly, Zorak and Moltar prefer him.

Another classic superhero, the forlorn and broken Birdman aspires to gain success as a talk show host. Unfortunately, life is not so kind.