Characters from South Park as portrayed in South Park: The Fractured but Whole. Character tropes related to the previous game should go here.

Advertisement:
open/close all folders
The New Kid
For tropes related to them, see South Park: The New Kid.

Coon & Friends is South Park’s homegrown superhero franchise led by The Coon. The group has faced many obstacles in its storied history with many conflicts stemming from the actions of its founder. The latest crisis it faces is the defection of several former members after unhappiness over the direction of the franchise. Time will tell whether Coon & Friends can rebound from this loss and emerge as the world’s greatest and most profitable superhero franchise.
The Coon (Eric Cartman) 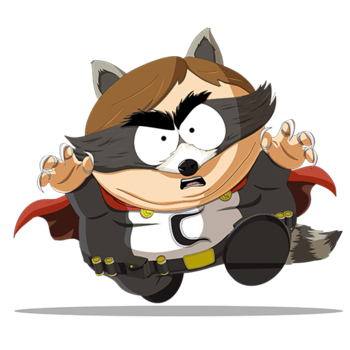 Who is the Coon? A Ninja Manimal. An Assassin with Bleed attacks both deadly and cruel. The offspring of a space raccoon and a try-anything-once animal control officer. True identity: Unknown.
Advertisement:
Human Kite (Kyle Broflovski) 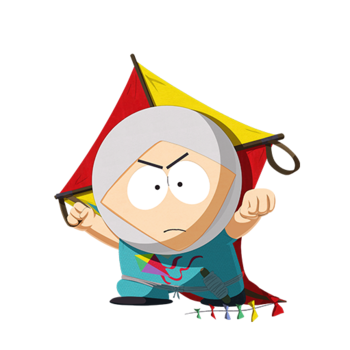 An alien combating the persecution of kites across the galaxy, Human Kite, aka Kyle Broflovski, is an Elementalist/Blaster hybrid with fucking laser eyes. Nemesis: Human Kite from an Alternate Universe.
Mosquito (Clyde Donovan) 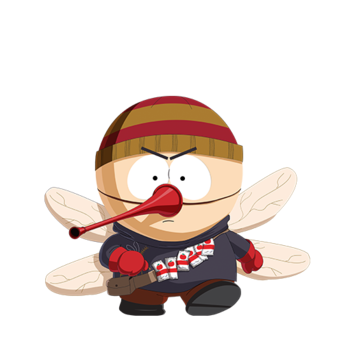 Bitten by a radioactive mosquito, Clyde Donovan became the superhuman disease vector known as: Mosquito. Now he sucks the blood out of crime and is just generally really gross.
Super Craig (Craig Tucker) 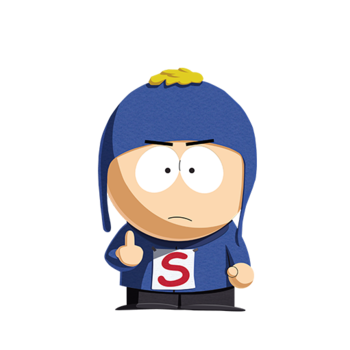 Super Craig Tucker is super all the time, even when not playing superheroes. Super strong. Super pissed. Super at flipping people off and punching them really hard.
Fastpass (Jimmy Valmer) 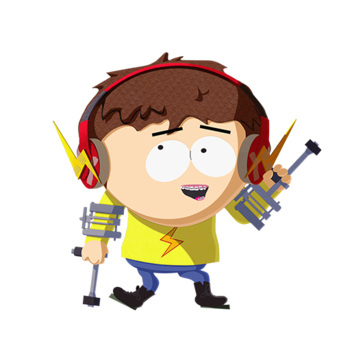 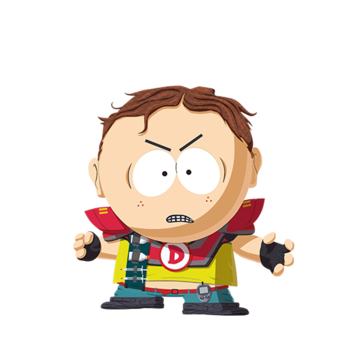 Scott Malkinson calls upon the devastating power of diabetes as Captain Diabetes. Brutalist archetype combining punishing melee knockback moves with an annoying desire to hang out. FYI, has diabetes.
Advertisement:

Retribution, but with Inclusion! Splintering from Coon & Friends after a disagreement over franchise direction, the Freedom Pals represent a group who has a greater focus on equal success and fair representation in media for all of its members. Headed by Mysterion, South Park’s newest franchise is decidedly more accepting and tolerant than rival groups. The only thing they won’t tolerate is letting Coon & Friends beat them in the race to make loads of money and build a blockbuster franchise.
Doctor Timothy (Timmy Burch) 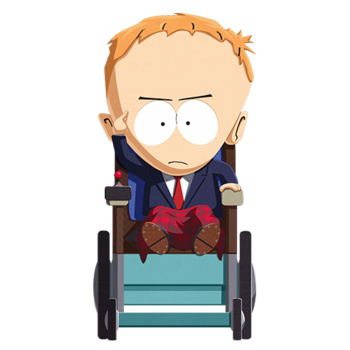 As mastermind and leader of The Freedom Pals, Doctor Timothy relies on his impressive mental powers to control the field of battle – and dominate the psyches of his foes.
Mysterion (Kenny McCormick) 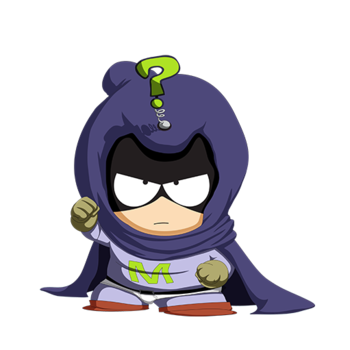 A reborn-again Netherborn, Mysterion possesses power and knowledge man was not meant to have. In times of desperation he can assume his ultimate form: Dead Mysterion.
Toolshed (Stan Marsh) 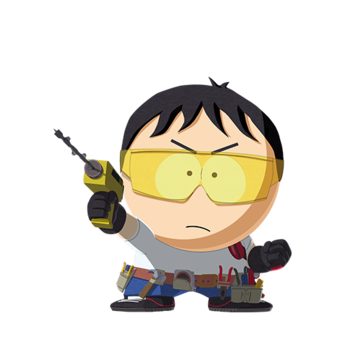 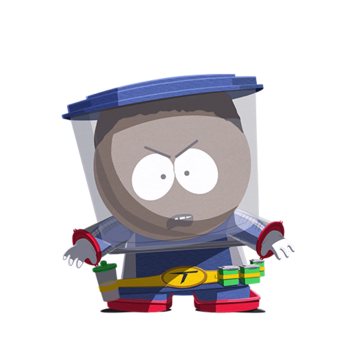 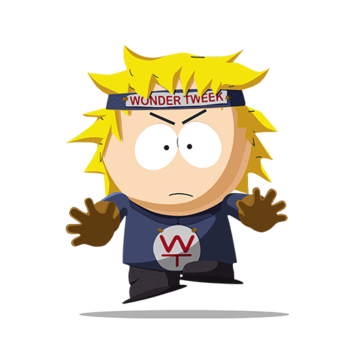 As Tweek Tweak innocently watched the Weather Channel, a solar anomaly granted him power over the primal elements of earth, lightning, water and caffeine. 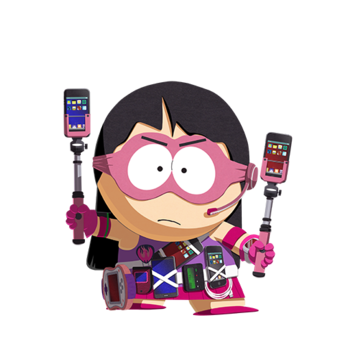 A Gadgeteer and white-hat hacker with a heart of gold, Call Girl viciously trolls crime on social media and IRL. Equally adept at doxing, trolling, and debuffing.
Henrietta Biggle 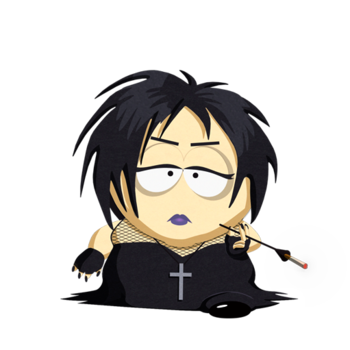 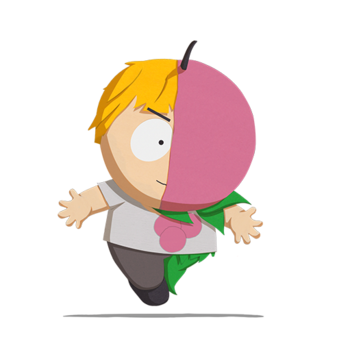 Randy Marsh
Stan/Toolshed's dad who has a serious drinking problem.
Classi
A stripper the New Kid and Captain Diabetes are sent to find for information.
Morgan Freeman
Yes, that Morgan Freeman. Here, he's found running Freeman's Tacos and mentoring you on the crafting system.
Towelie
A genetically engineered towel who likes to get a high, but is currently in rehab who works in a pot... err, "medicinal" cannabis store.
Chris and Kelly
The New Kid's parents, named in the sequel. This game expands their characters and backstory.
PC Principal
The principal of South Park Elementary. He's rather... opinionated.
Dr. Mephesto
A Mad Scientist with an obsession with asses.
Terrance Mephesto
Most people don't remember that Dr. Mephesto once had a son named Terrance, who was tragically killed when some kids in town played with a relic belonging to Barbara Streisand.
Santa Claus
The celebrated symbol of Christmas.
The Old Mechanic
An old mechanic that is perpetually polishing an old carburetur and telling you not to go down roads. 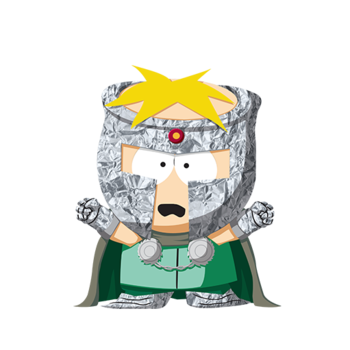 Professor Chaos outsources chaos with ruthless efficiency, relying on an army of hamster minions, Chaos Kids, and Minions to execute his vaguely evil plans. Not an accredited professor.
General Disarray (Dougie O'Connell)
The right hand of Butters Stotch/Professor Chaos.
Human Kite from an Alternate Universe (Kyle Schwartz)
Kyle Broflovski/Human Kite's cousin from Seattle who plays an alternate universe version of Human Kite at the behest of Kyle Broflovski's mother, Sheila (who demands that Human Kite lets him play with the other heroes). Like his usual self, he's a complete stereotype of the Jewish religon, with little to no similarities to his cousin.
Sheila Broflovski
Kyle/Human Kite's mom, who is very protective of her nephew, Kyle Schwartz/Human Kite from an Alternate Universe.
Spontaneous Bootay
A massively fat stripper who Classi sends to defeat the New Kid and Captain Diabetes.
Rebecca
A fat, manly member of the Raisins Girls, who acts as their muscle.
Sergeant Yates
The incredibly racist chief officer of the South Park Police Department. He is the head cultist of Shub-Niggurath and appeases her with black meat.
Jared Fogle
The former spokesman of Subway and current incarcerated child molester. He is the only non-black prisoner in South Park's jail, and therefore the only one in there for committing an actual crime.
Shub-Niggurath
The Black Goat of the Woods and Mother of a Thousand Young. An Outer God worshiped by the South Park police whose appearance was foretold by the prophet H. P. Lovecraft. Demands human sacrifice, but only likes "dark meat".
Stephen Stotch
The ever assertive (and abusive) father of Butters/Professor Chaos.
Therapy Kids
Several students Mr. Mackey recruited to help Craig and Tweek deal with their issues.
Old People
The residents of South Park's old folks home.
Woodland Critters
Satanic woodland animals born from Cartman's imagination, serving as his and Mitch's tyrannical muscle in the Bad Future.
Mitch Conner (Eric Cartman)
A persona Cartman made on his hand that originally pretended to be Jennifer Lopez. He has resurfaced with a scheme to "fix" South Park and its vigilante problem by making everything worse.
The Master Vampire (Mr. Adams)
The true head of the Vampire Kids, who reveals himself to both set the party's theme and try to salvage it before Mysterion and his friends can wreck it. Also Mike Makowski's stepfather, as it turns out.
"Corey Haim" AKA Michael Jackson
The spirit of Corey Haim, star of the 80s vampire movie The Lost Boys, summoned from the afterlife as a special celebrity guest for Mike's birthday party. For some reason, he doesn't really look all that much like Corey Haim, but whatever, it's probably not important.
Nathan and Mimsy
The culprits behind the disappearances of the counselors of Camp Tardicaca.
The Zarganor
Mintberry Crunch's alien nemesis who has pursued him to Camp Tardicaca.

As a whole
Recurring enemies that will accost you in the streets or elsewhere.
Sixth Graders
Pervy and disgusting older kids that like picking on the Fourthies.
Raisins Girls
Members of an off-brand underage Hooters Expy who use their womanly charms to get you to overspend and overtip. Mosquito tends to be especially vulnerable to their charms.
Rednecks
The local white trash who will always find a reason to try and beat you up. Unlike the other fractions, they are not fought as overworld encounters, only appearing during certain cutscenes involving filling out your character sheet.
Chaos Minions
Professor Chaos' minions and immigrant workers.
Crab People
Crab people, Crab people. Taste like crab, talk like people.
City Ninja Service
City Wok's City Ninja Service. Asian experts of stealth and martial arts. Led by Tuong Lu Kim.
Crooked Cops
The corrupt, racist South Park Police Department.
Drug-Addicted Bums
South Park's criminal vagrant population.
Vamp Kids
The local "Vampires" who are in Casa Bonita to celebrate their leader Mike Makowski's birthday and brought Karen McCormick with them.
Monsters
Drug-addicted criminals wearing monster costumes who are plaguing Lake Tardicaca.