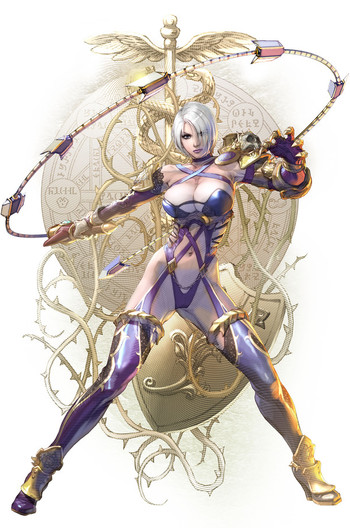 First Appearance: Soulcalibur (1998)
Weapon: Ivy Blade, a snake sword
Fighting Style: Unrelated Link
Height: 179cm (5'10")
Weight: 58kg (128lbs)
Blood Type: Unknown
Alignment: Neutral
Relationships: Adoptive parents (deceased); Cervantes, possible father
Voiced by: Miyuki Sawashiro (Japanese), Lani Minella (English)
Born to an aristocratic English family, her early years were spent in a loving environment, that is until her father’s obsession with alchemy and immortality gained by obtaining Soul Edge drove him to an early grave. Shortly thereafter, Ivy’s mother passed away and so began her journey to destroy the sword that brought such despair to her family. The fruit of Ivy's research is the "Ivy Blade", a shapeshifting sword that alternates between a sword and a segmented whip, a deadly threat at both close and longer ranges.
Ivy now serves as a member of Schwartzstrom under Nightmare, but she detests her colleagues' bloodlust and furthers her own agenda behind the scenes.
Ivy is one of the most advanced characters in the series, and can be devastating when played right. She's a stance-based character, and has a sword mode and whip-mode that one must use well to keep the opponent's always guessing. Ivy perhaps plays at her best at a distance, in fact she arguably has the best zoner/keep-away game of any character in VI; she also has some strong command throws and a decent ability to ring out her opponents. But she struggles in closer distance fighting, both offensively and defensively.
Advertisement:
Kilik 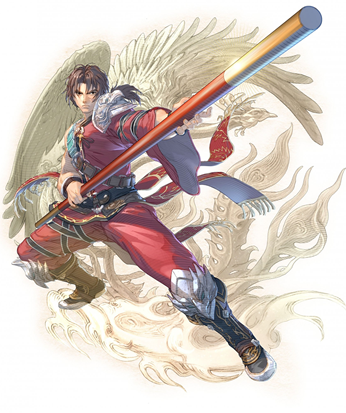 Destiny Awakened
Listen... to the raging of my soul!
Origin: Ling-Sheng Su Temple, Ming Empire (China) note Where he was raised at least, his bio states his nationality is unknown 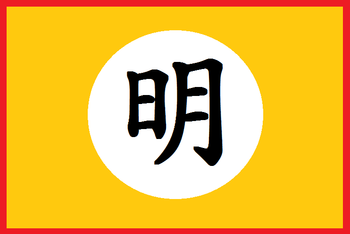 First Appearance: Soulcalibur (1998)
Weapon: Kali-yuga, a rod.
Fighting Style: Ling-Sheng Su Arts of the Rod
Height: 169cm (5'6")
Weight: 63kg (139lbs)
Blood Type: A
Alignment: Good
Relationships: Raised in Ling-Sheng Su Temple (monks deceased); Xianglian, sister-figure (deceased); Xianghua and Maxi, friends
Voiced by: Soichiro Hoshi (Japanese), Grant George (English)
An orphaned monk raised at the Ling-Sheng Su temple. He becomes a victim of the Evil Seed, but his adoptive sister Xianglian sacrifices herself to save him from the fate of insanity at the cost of her own. Because Xianglian removed her Dvapara-Yuga mirror from herself, she was Malfested and driven to insanity by the seed and Kilik was forced to kill her in self-defense. After being trained by the Edge Master, Kilik sets out alongside Xianghua and Maxi to find and destroy Soul Edge.
Kilik is mostly the same staff-based Jack of All Stats we know. He has excellent range and moderate damage, with success relying primarily on the player's own skill. Several of his attacks end in Reversal Edge parries, useful for initiating the mode and building more meter. His most unique trait by far is his Possessed State, replacing the standard Super Mode of the other cast. Instead of running on a timer, this state rapidly depletes his health, but greatly increases his power all around, while giving him a new and very devastating Critical Edge.
Chai Xianghua 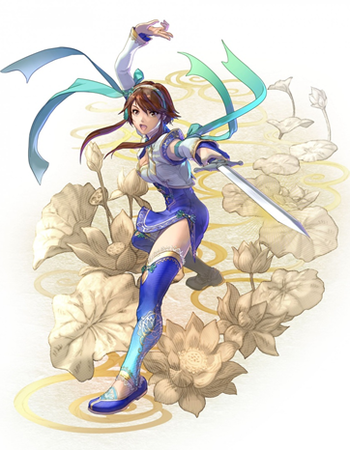 First Appearance: Soulcalibur (1998)
Weapon: a nameless jian (Chinese rapier) inherited from her mother note Actually the Krita-Yuga, AKA: Soul Calibur
Fighting Style: Sword arts passed down from mother
Height: 152cm (5'0")
Weight: 42kg (93lbs)
Blood Type: B
Alignment: Good
Relationships: Kong Xiuqiang, father (deceased, according to Chai Xiangfei, actually alive); Chai Xiangfei, mother (deceased); Chai Xianglian, older sister (deceased)
Voiced by: Aya Suzaki (Japanese), Wendee Lee (English)
Xianghua's mother hails from the prestigious Chai family, who taught her mastery of swordsmanship from a young age. Her father Kong Xiuquang is alive, but Xianghua would never even recognize him if the two crossed in the street, for her mother never spoke of him. Two years after her mother's passing, Xianghua sets out on a quest at the behest of the Ming Empire's government to find Soul Edge, the "Hero's Sword". Meeting Kilik and Maxi and learning that the sword is evil, Xianghua amends her mission to destroy the sword instead of returning it to China.
Xianghua is a well-balanced character whose specialty is mix-ups and mindgames regarding her stances. She has a lot of incredibly safe moves, a strong poking game and great evasion from her stances, though she's not the hardest-hitter in the cast and she can be vulnerable to keep-away and pushback. In this game, she gains a new stance called Silent Xia Sheng, allowing her to stage confusing and unpredictable attacks on her enemies.
Yoshimitsu 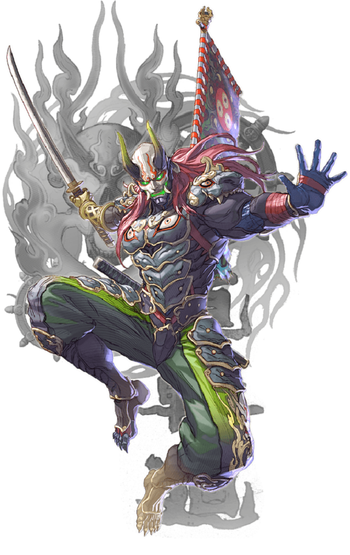 First Appearance: Soulcalibur (1998)
Weapon: Manji & Fuma Blade, a pair of katanas
Fighting Style: Manji Ninjutsu
Height: 170cm (5'7")
Weight: 57kg (126lbs)
Blood Type: Unknown
Alignment: Neutral/Good
Relationships: Manji Clan (all deceased)
Voiced by: Norio Wakamoto (Japanese), Mitch Urban (English)
The leader of a group of noble thieves that call themselves the Manji. His clan was decimated by a warlord and now Yoshimitsu, as the only one carrying the mantle of the Manji, swears to use his form of ninjitsu to bring justice to his slain brothers. Launching a one-man guerrilla war against the overwhelming might of the lord's forces, his hatred and desire for revenge grew ever stronger until he felt the need to acquire a mighty weapon that would be the instrument of his revenge: the sword Soul Edge.
Yoshimitsu crossed Asia and and found in Europe a strange land ravaged by war and madness, and could not help but be reminded of the devastation and tragedy that befell his own home. Meeting Sophitia soothed his deteriorating mind, and he abandoned his desire for revenge to pursue a path of righteousness instead, leading him to form a new clan, a band of chivalrous thieves known as the Manjitou.
Yoshimitsu returns here and is as off-kilter as ever. He's a fast mix-up character with many different options, but is hard to control for an inexperienced player. Not only does he retain his inherent silliness, he gains new abilities as well. He has an Energy Absorption passive that allows him to drain his opponent's meter with certain attacks while increasing his own, and he can spend his meter for enhanced attacks with a trait called Soul Burn, reminiscent of the otherwise-removed Brave Edges from V. As always, unpredictability is key for using Yoshimitsu effectively.
Nightmare 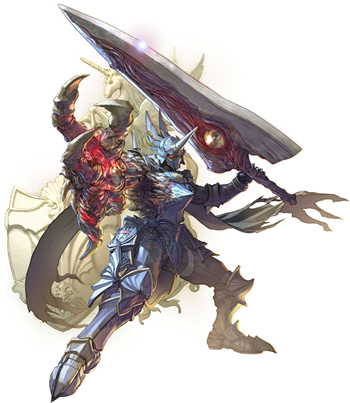 Azure Nightmare
Blood! Darkness! I shall drown the world in both!
Origin: The living incarnation of the cursed sword, Soul Edge

First Appearance: Soulcalibur (1998)
Weapon: Soul Edge (Great Sword form)
Fighting Style: Memories of Soul Edge
Height: 172cm (5'8")
Weight: 157kg (346lbs)
Blood Type: Unknown
Alignment: Evil
Relationships: Inferno, driving force; Siegfried, original identity; Ivy, former-member of Schwartzstrom; Astaroth, member of Schwartzstorm; Lizardman Chief, member of Schwartzstorm
Voiced by: Nobuyuki Hiyama (Japanese), Kirk Thornton (English)
The feared Azure Knight, a Malfested warrior who wields the cursed sword Soul Edge and wanders Europe, slaughtering everyone he encounters. He reaps the souls of the living as if they were mere stocks of corn, and just the name "Nightmare" strikes terror into the hearts of men.
Nightmare is Mighty Glacier who's not particularly fast (though faster than others of this type), but can deal massive damage and has very good range. Many of his moves allow Nightmare to access a temporary Soul Charge state outside of Soul Charge itself for a short time. Overall, he's like his host Siegfried, but simpler with fewer stances and more feral attacks. His Critical Edge is unique, in that it's both unblockable and a Counter-Attack, making it one of the easiest in the game. Overall, Nightmare is an offensive powerhouse for players who just want to reap souls and rip their enemies into pieces.
Astaroth 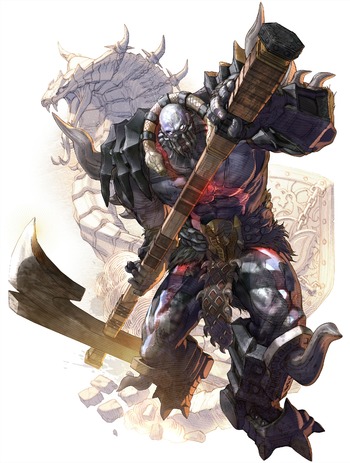 First Appearance: Soulcalibur (1998)
Weapon: Kulutues, a giant axe
Fighting Style: Gyulkus
Height: 220cm (7'3")
Weight: 183kg (403lbs)
Blood Type: None
Alignment: Evil
Relationships: None
Voiced by: Ryūzaburō Ōtomo (Japanese), Michael McConnohie (English)
A golem created by the Fygul Cestemus cult and empowered by Ares, Astaroth seeks to claim Soul Edge for the god of war. He serves as one of Nightmare's lieutenants in the Schwartzstrom, but plans to betray him and take Soul Edge once it is complete.
Astaroth can do absurd amounts of damage and has very good reach. Command throws are the cornerstone of how Astaroth plays, he has a good number of devastating throws in his moveset including some low throws. This makes him a hybrid of keepout and grappler playstyles. A unique trait gives him Super Armor during Soul Charge, encouraging him to initiate grabs when possible. Keep in mind though, this big boy has a long wind-up to his attacks and all the mobility of molasses. But you only need to grab a maggot once to squash them!
Advertisement:
Inferno 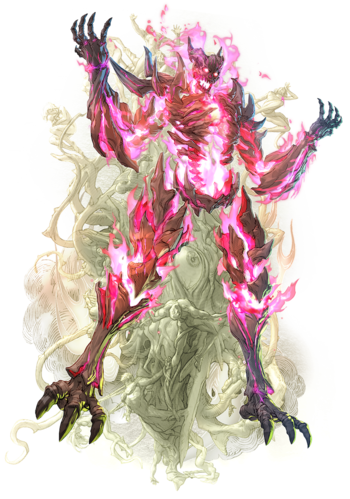 Hellfire of Despair
My flame will burn bright again...and my rising shadow will blanket the world!
Origin - Astral Chaos

First Appearance: Soul Edge (1995)
Weapon: Soul Edge (Great Sword form)
Fighting Style: Fighting style of his current host
Height: Immeasureable
Weight: Immeasureable
Blood Type: None
Alignment: Evil
Relationships: None
Voiced by: None (In-Game), Ben Diskin (English, Story Mode)
The "living incarnation" of Soul Edge, Inferno is a demonic entity that dwells within Astral Chaos; corrupting those exposed to its dark power into the monstrous Malfested and devouring the souls of those slain by the cursed sword. With Nightmare and Cervantes as its puppets, Inferno seeks to reclaim the scattered shards of Soul Edge, destroy its nemesis — the spirit sword Soul Calibur — and raze the world with hellfire.
Befitting being the incarnation of Soul Edge, Inferno is one of the mightiest fighters in the roster. He plays like a souped-up Nightmare, with permanent Soul Charge benefits and powerful exclusive moves taken from past appearances. He even gains two teleport moves, which he can transition into from almost every other move, massively improving his combo potential. Inferno is so Purposely Overpowered that he's the only character who cannot be used online, only in local and single-player modes.
Cervantes de Leon 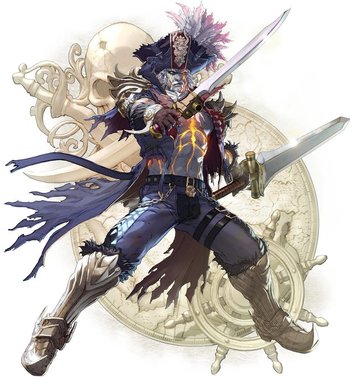 The Shell of a Proud Man
Now, you know despair!
Origin: Valencia, Kingdom of Spain 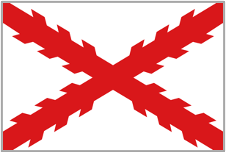 First Appearance: Soul Edge (1995)
Weapon: Acheron & Nirvana, a longsword & pistol sword
Fighting Style: Memories of Soul Edge
Height: 182cm (5'11")
Weight: 89kg (196lbs)
Blood Type: None
Alignment: Evil
Relationships: Ivy, biological daughter; Parents (deceased); Crew (deceased, slaughtered by his own hands)
Voiced by: Hiroshi Shirokuma (Japanese), Patrick Seitz (English)
Cervantes de Leon was once one of the most feared pirates in history, wielding Soul Edge in the form of two longswords. His reign of terror was cut short when he was slain by Sophitia and Taki, who destroyed one half of Soul Edge; while the other was taken by Siegfried. However, Soul Edge's power reanimated Cervantes as an undead pirate, and he now seeks to reclaim the cursed sword from Nightmare.
Cervantes is a power character with great mobility and mix-ups, but has a weak defensive game, which encourages the player to use a primarily offensive style. He also has a lot of flashy moves, so beginners tend to find him approachable. He can teleport and use a special gun in his sword for further combinations and as a projectile, but try not to rely too much on it. Cervantes can be summed up as "high risk, high reward".