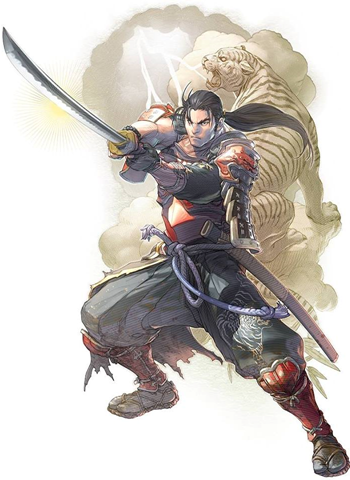 Mercenary in The Warlike Age
Heishiro Mitsurugi. Do not forget this name!
Origin: Bizen, Japan

First Appearance: Soul Edge (1995)
Weapon: Shishi-oh, a katana
Voiced by: Toshiyuki Morikawa (Japanese), Ray Chase (English)
Mitsurugi was born as the fourth son of a family of farmers, all having been taken by sickness. Taking the name "Mitsurugi", he has set out to the world with only one goal: to seek the strongest warrior and challenge them to battle, where he wishes to reign victorious. Because of this, he draws himself to Soul Edge for that reason.
Mitsurugi is the Ryu of the series — a well-balanced character with no strengths or gimmicks, but also no weaknesses. While he's outshined individually in each category by other characters, and lacks any real special powers to utilize, he's well-rounded overall in range, speed and priority, and the lack of powers encourages the player to get down and dirty with the opponent. Mitsurugi is a very good choice for players who are new to Soul Calibur or to players who like good fundamentals.
Advertisement:
Seong Mi-na 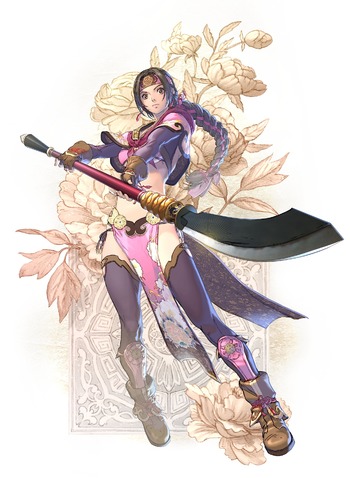 Daughter of the Bladed Rod
Let's get this over with!
Origin: Jirisan, Joseon Kingdom (South Korea) 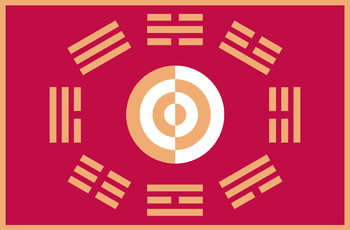 First Appearance: Soul Edge (1995)
Weapon: Scarlet Thunder, a zanbatou / bladed staff
Voiced by: Chinatsu Akasaki (Japanese), Erica Mendez (English)
The Tomboy-ish daughter of a Korean martial arts master named "Seong Han-myeong". A traditional man, he is insistent his daughter be wed, but Mi-na is a stubborn girl with no ambitions of the sort and runs away to get out from under her overbearing father.
Seong Mi-na is a Long-Range Fighter through and through, and the player is encouraged to stay out of reach as much as possible. She has a strong keep-away style of fighting with safe moves and guard harassment, as well as a unique trait where her tip does an increased damage compared to close-range, making her great at controlling space. However Mi-na is fairly slow and her long, hefty weapon turns into a liability if she has to fight up-close.
Taki 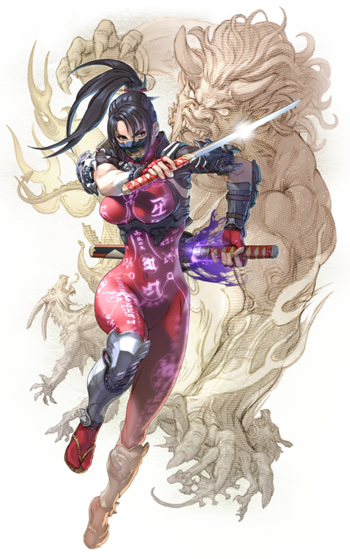 First Appearance: Soul Edge (1995)
Weapon: Rekki-maru & Mekki-maru, a pair of kodachi
Voiced by: Nanako Mori (Japanese), Cynthia Holloway (English)
A kunoichi of the Fu-Ma ninja clan, Taki was exiled for her theft of the cursed sword Mekki-Maru, which was forged from a shard of Soul Edge - a weapon she seeks to destroy.
Taki is the Ninja of the series and it holds true here. She excels when close and is able to close the distance with fast movement and her teleportation ability. She's one of the few characters with projectile based attacks, but those are mainly to initiate more combos and thus can't be relied on their own. Her Mekki-Maru does Scratch Damage at all times, even outside of Soul Charge. Taki is fantastic at keeping the momentum going and pressuring on an enemy.
Maxi 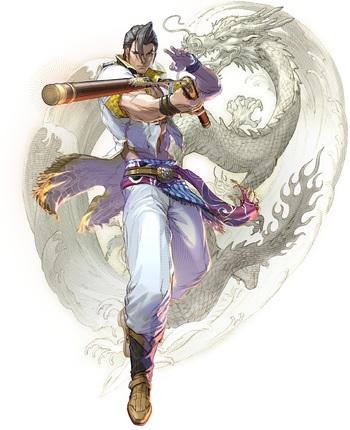 Dandy of the Seas
Boring, just like the rest of 'em!
Origin: Shuri, Ryukyu Kingdom (Okinawa) 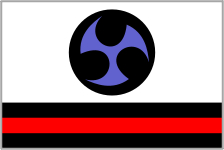 First Appearance: Soulcalibur (1998)
Weapon: Fatibal, a pair of Nunchaku
Voiced by: Shigeo Kiyama (Japanese), Steve Van Wormer (English)
A pirate whose crew were massacred by Astaroth, Maxi seeks revenge while travelling with Kilik and Xianghua.
Maxi generally does low damage per hit, but each hit is very fast, and can come in unexpected places, which allows him to build up to strong combos with more damaging attacks. He has seven different stances, which he shifts in-between during attacks depending on the input, allowing a wide variety of different options available to use. He can also stop to enter a Pure Soul Loop stance, where he gets a damage buff. However Maxi's defences are somewhat lacking.
Voldo 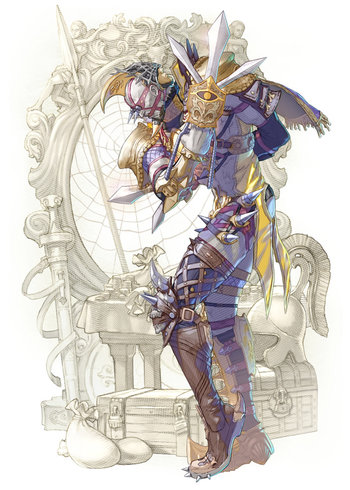 First Appearance: Soul Edge (1995)
Weapon: Manas & Ayus, a pair of katars
The enigmatic and deadly guardian of a treasure trove known as the Money Pit. Deprived of his sanity and all senses except his hearing, Voldo's only purpose was to loyally honor his late master Vercci by eliminating intruders and thieves. One day, he hears the voice of his master telling him to seek out Soul Edge, and so Voldo sets off in search of the legendary sword his master desired in life.
Voldo relies heavily on Confusion Fu and having his back facing his opponent is something he'll do at least half the time. He can use a crabwalk stance and a crawl stance, and can use Reversal Edge while backturned. This gives him some very strong mix-up and evasion tools. Because of his weird nature, he's often seen as both tricky to use and fight.
Sophitia Alexandra 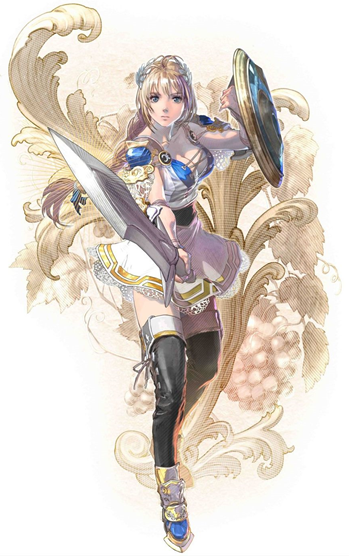 First Appearance: Soul Edge (1995)
Weapon: Omega Sword & Elk Shield, a short sword & shield
Voiced by: Chie Nakamura (Japanese), Erica Lindbeck (English)
The daughter of a baker, she set out to destroy Soul Edge after receiving the holy Omega Sword from the god Hephaestus. Though reluctant, she uses her divine-given skills to seek the cursed blade and prevent it from causing any more destruction.
Sophitia's Chronicles of Souls path in Soul Calibur VI details the events that followed her battle against Cervantes in 1583; Sophitia was successful in putting a halt to Cervantes' reign of terror, but she could not completely destroy Soul Edge. Her shattering only one half of it resulted in the shards piercing her body, forcing an unwanted connection with the cursed blade.
Three years afterward, Sophitia went back to working at her family's bakery alongside her sister Cassandra, though this wouldn't last however. Sophitia kept having visions of Soul Edge's evil under its new wielder, Nightmare; which episode led to two fateful encounters for her.
Sophitia met a blacksmith named Rothion by chance when the young man went to her family's bakery, the two quickly fell in love and got engaged. While Sophitia and Rothion sought blessings for their marriage by Hephaestus, the god had more pressing matters, and asked Sophitia to take arms again to fight against Soul Edge once more. Rothion tried to free Sophitia of her mission by offering himself in her place, but Hephaestus chose Rothion to forge Sophitia's weapons instead.
Sophitia went on her journey, fending off several malfested warriors by healing them with her divine blessing. A chance encounter with Siegfried - who had once been Nightmare but had been freed from Soul Edge's control - resulted in her freeing him of some of his inner demons, though she could not completely cleanse his malfestation. Sophitia took this encounter as her mission being fulfilled and let Soul Edge itself be taken care of by Siegfried.
Sophitia is a very well-balanced character overall, with decent speed and damage. She has great combo potential, especially in Soul Charge where her strings are extended, but plays a fairly strong punishment and poking-in game too. Overall, Sophitia is a very beginner-friendly character who only has one real definitive weakness: a lack of reach.
Advertisement:
Siegfried Schtauffen 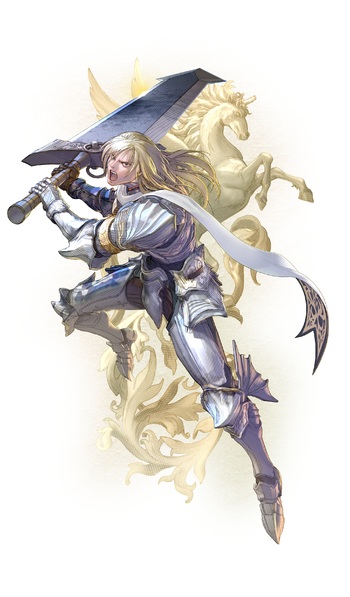 A Soul in Purgatory
My life... is not for your taking!
Origin: Ober-Getzenberg, Holy Roman Empire (Germany)

First Appearance: Soul Edge (1995)
Weapon: Requiem, a zweihander
Voiced by: Nobuyuki Hiyama (Japanese), Kirk Thornton (English)
Newly freed from Soul Edge's control by Xianghua and Kilik, Siegfried is haunted by guilt and seeks to atone for the sins he committed as Nightmare, as well as for the patricide that had sparked his descent into madness and search for the cursed blade. However, freeing himself from Soul Edge's curse will prove more difficult than he realizes.
Siegfried is a beginner-friendly character in early stages that becomes one of the more difficult characters to play effectively later on. He's a power-based character with a strong mix-up game, and has special stances that require mastery. His attacks have long reach, but are often linear and easy to dodge. A unique trait introduce in this game is the Dark Legacy state, where the lower his health gets, the strong his attacks become (he can also force it by Guard Impacting enough times). This state will turn his standard attacks into Lethal Hits, and can be cashed in for a version of Nightmare's Soul Wave.
Hwang Seong-gyeong 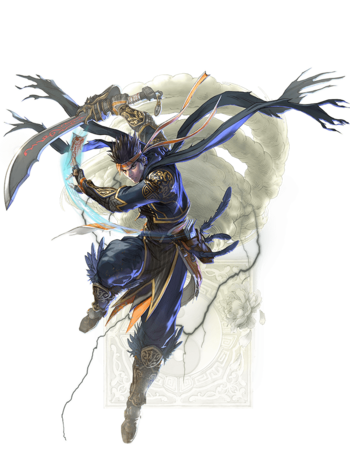 First Appearance: Soul Edge (Korean ver., 1995)
Weapon: Dark Thunder, a podao, in conjunction with talismans
Voiced by: Subaru Kimura (Japanese), Lucien Dodge (English, Season 1; Seong Mi-na Soul Chronicle only, replaced in Version 2.30 update), SungWon Cho (English, Season 2)
A disciple of Seong Han-myong and friend of Seong Mi-na. A soldier in the Korean military, Hwang was appointed by them to obtain Soul Edge in order to bolster Korea's power against Japan. Hearing rumors that Japan had already begun invading Korea, however, he returned home immediately. Soon afterward, Hwang was once again sent out to find Soul Edge, this time in secret so none of his homeland's enemies would be aware of their intentions. He also has another objective, to return Seong Mi-na safely home.

Having done so, Hwang — who had developed doubts regarding Soul Edge being the legendary "Sword of Salvation" — set out to investigate a cult called the Society of Salvation — who were gathering shards of Soul Edge — and mysteriously vanished. Studying Taoism in the depths of the mystical Motien Pass, under the tutelage of the legendary Won Soo-hyun, Hwang emerged determined to purge the world of corruption and evil; disguising himself as an unknown soul cloaked in black and wearing a mask giving him the visage of an assassin.
Similar to Miturugi, Hwang is a well-rounded Jack-of-All-Stats who has a variety of options for any given situation, but does not excel in any particular area. That, however, is where their similarities end. Unlike Mitsurugi, who has no magical abilities to speak of and only relies on his training and his wits, Hwang is a practitioner of Taoist magic, utilizing mystical talismans to grant himself a Status Buff or for various offensive purposes. This gives him access to some of the best moves in the game, but there's a catch. Hwang has a special "Lifeforce Counter" underneath his health bar, represented by a yin-yang symbol with a number next to it. Using any of his more powerful moves will cause this counter to decrease, and some will even take a toll on his health and guard gauge. He starts with 4 Lifeforce, with a maximum of 9 and a minimum of -9, and can increase this value in a number of ways, but if it drops below 0 and into negative territory, Hwang will be forced to sacrifice a portion of his health in order to refill his Lifeforce, meaning he will start the next round with less health. To master Hwang, one must carefully manage his Lifeforce and make good use of his talismans. In essence, he can potentially be one of the strongest characters in the game, but you'll be paying a heavy price if you don't manage his Lifeforce correctly.