A list of the main heroes of Soul Hunter

To return to the main character index, go here.

Watch out for spoilers! 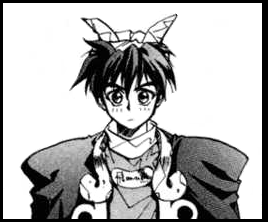 Taikoubou (Taikung in the Latin American dub) is the doushi chosen by Genshitenson to take on the Houshin Project due to his wit and sharp intelligence. Other than his brilliant mind, Taikoubou also has the ability to read other people's psyche and emotions. He uses this skill to his advantage when trying to convince people to change sides. His personality seems to be that of a slacker who would rather spend his time sleeping than training. Most of the time, he cheats his way into winning.

His ideology is to win battles without killing anyone, which turned out to be difficult to keep on more than one occasion. Underneath his unreliable-looking, foolish exterior, Taikobou is a very caring person who wants to protect his friends and allies and always tries to find the bloodless way out of things. He hates bitter medicine and loves peaches. His real name is Ryobou, and he was part of the Kyou nobility, back when the Yin dynasty was fighting for control with the Kyou and the Shuu. One day the emperor of the Yin died and, on Dakki's orders, the army ravaged his village and took away almost everybody in order to bury them alive in the freshly erected tomb. He escaped and was found by Genshitenson, who offered to be his teacher because Taikobou was born with the bones of a sennin. Wanting to stop Dakki, Taikobou accepted and has been living in the sennin world ever since.

Later in the story, it turns out that the real Ryobou was murdered when the village was razed, and that someone took over his body. Taikobou is actually one half of Fukki, one of the First Men. They were five aliens who ended up on the planet after their home was destroyed and all except one decided to merge with it. The last one, an alien called Jyoka, rejected the idea and wanted to recreate history to mirror the events of her home planet, and see where it would have gone if it had not been destroyed. The others imprisoned her, but that did not stop her from becoming the signpost of history and manipulating the events as to mirror the ones she experienced on her home planet. Whenever history deviated off course, Jyoka would wipe away all life and begin anew. Witnessing that, Fukki decided to stop her and contacted Genshitenson with an elaborate plan. He split his soul into two parts, Taikobou and Outenkun and began the first step in a series which had a single goal: stopping Jyoka for good and letting history follow its natural course. 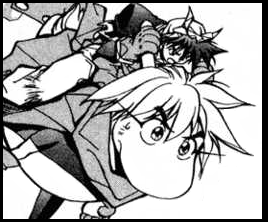 Suupuushan is a Spiritual Beast given to Taikobou by Genshitenson. A naive, optimistic and kind-hearted character, he became a loyal companion to Taikobou once he discovered that there is more than meets the eye when it comes to him. Suupuushan is often noted by others to resemble a flying hippo. 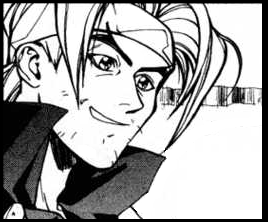 A natural-born doushi, Kou Hikou is the general of the Yin army and head of the large Kou clan. He is married to one of China's most beautiful women and has four sons, three siblings and four sworn brothers. He is also Bunchuu's best and only friend, and the kind of man who inspires friendship and loyalty wherever he goes. In spite of his rough exterior and outward lack of manners, Kou Hikou is courageous, loyal, compassionate, devoted to his loved ones and has a phenomenal will, being able to resist Dakki's Temptation spell on his own. His soldiers worship him, his family looks up to him and he is the only other person other than Bunchuu whom the Emperor regards as a friend.

After Dakki's arrival, Hikou tried very hard to keep the dynasty on a steady path, and was increasingly worried about Dakki's excesses and unnerving behavior. However, after his wife and sister commit suicide because of Dakki and Chuuoh, Hikou realizes that the Yin dynasty cannot be saved anymore, and joined Taikoubou to create a new dynasty. This put him at odds with Bunchuu, and their struggle played an important role in the story. 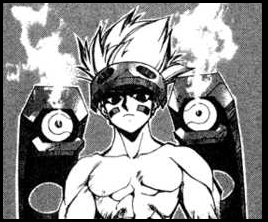 Officially, Nataku is the son of Li Sei, the commanding officer of one of the four imperial gates, and his wife Yinshi. In reality, he is something akin to a living weapon. His mother had been pregnant for three years and several months when Taiitsu Shinjin appeared in her dream and told her that although her baby had died, he could still turn the mass of flesh in her womb into a child. Nataku's unusual birth stirred suspicion and repulsion into his father, who did not consider him his child. In contrast, his mother adored him and seemed oblivious to his strange behavior and his cold personality.

Later in life, Nataku killed the son of a river god in self-defense, and sacrificed himself to protect Yinshi when the river god's father arrived seeking revenge. Heartbroken, Yinshi buried his core near the river, only to have it excavated and thrown into the water by Li Sei. Luckily, he was found and recreated by Taiitsu Shinjin, and returns to exact revenge on his father. It is at this point in his life when Nataku meets Taikobou, who convinces him to join his team.

Nataku is normally cold and emotionless, and seems to care only about getting stronger and defeating powerful opponents. Later in the series, as he acquires more and more experiences, he mellows out a bit and adds his allies and Tenshou to the list of people he cares about. 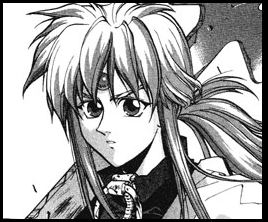 Known as the "Genius Doushi", Youzen is the disciple of Gyokutei Shinjin and the only shapeshifter in Konron. He was called upon by Genshitenson to aid Taikoubou. Unwilling to work for just anyone, Youzen first tested Taikoubou's ability to lead and gave him three trials, with the condition that if Taikobou failed them, he would pass the leadership on to Youzen. After Taikobou's success, Youzen agreed to follow him and became one of his most loyal supporters. Due to his upbringing and his exceptional good looks and talents, Youzen tends to be proud and cannot stand being upstaged.

It turns out that he is actually a youkai, the son of Tsuuten Kyoshu, and was traded away to Genshitenson many years ago. Initially, he rejects his past as a youkai because he is afraid of his demon self. But after meeting Taikoubou and co., he finally learned to accept his true form and his father. By the end of the Manga he succeeds Genshi Tenson as the leader of the Sennin World of Horai Island. 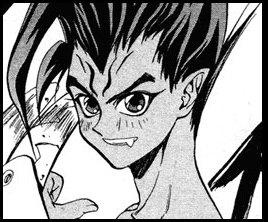 An orphan found and adopted by Ki Shou to be his 100th son, Raishinshi was taken away as a little boy (implicitly against his will) to be trained as a doushi by his sennin teacher, Unchuushi. After being tricked by his teacher into eating a special transformation fruit that turned his skin darker and gave him fangs and bat wings, Raishinshi felt too ashamed to return home in that freakish state and tried to compensate by making a name for himself, thus becoming the leader of a bandit group who stole from the rich and gave to the poor. After being recruited by Taikobou, Raishinshi proved himself to be a useful ally, being able to control the powers of wind and lightning. Raishinshi is the youngest of the group members, and probably the most hot tempered of them all.

He and his teacher have a tense relationship, because Unchuushi experimented on Raishinshi without his consent and kept him as a virtual prisoner in the sennin world. As a result, Raishinshi is always trying to get even and kill him. 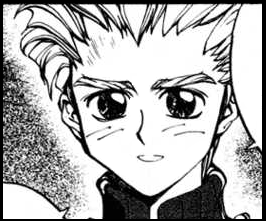 Taikoubou's self proclaimed disciple, Bukichi is a natural born doushi - this means that even though he never underwent training as a doushi, he was born with the special bone structure that enables him to be physically stronger: jump higher, run faster, see further, hear better etc. Basically, in any normal human function, he surpasses the average human ability. Bukichi is a very useful person to have by your side because he can do just about anything (excluding the use of paopeis),from running on water, talking to animals, seeing in the dark etc. Many of his skills have been acquired thanks to the countless side jobs he had before.

Originally a woodcutter from Seiki, Bukichi has a personal reason for joining Taikobou: his father went looking for work in Chouka and was thrown into Dakki's snake pit, leaving Bukichi alone with his ailing mother. Although many people blamed Taikobou (and in all fairness, they would not have been wrong), Bukichi admired Taikobou for continuing his fight against Dakki and had wanted to join him for years. His determination and obliviousness in the face of rejection finally gained him a place in Taikobou's heart and he became part of his group. 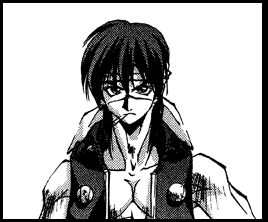 The second son of Kou Hikou and his wife Kashi, Kou Tenka is a natural born doushi just like his father, and inherited his passion for fighting. From a very young age, Tenka began training to be a fighter with his father. One day, Doutoku Shinjin, one of the Twelve Sennins of Konron, visited him and offered him a place as his apprentice in Konron. Tenka accepted the offer because he wanted to surpass his father and returned only when he found out that his mother and aunt have died and that Kou Hikou had left the capital.

Tenka's laid-back manner and friendly personality hide his determination, stubbornness and incredible willpower. After his father dies, Tenka loses his purpose in life and experiences an existential crisis. The wound he acquires in battle with a youkai refuses to heal and slowly kills him - as a result, he decides to imbue the remaining of his short life with meaning and fights Chuuoh to restore his family's honor, but spares him in the end so that Ki Hatsu can execute him publicly and gain legitimacy as the new emperor. Immediately after he wins his battle with Chuuoh, a Yin soldier takes advantage of his wounded state and kills him. 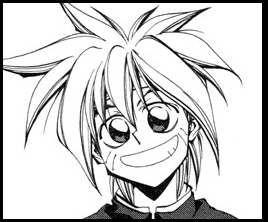 The youngest son of Kou Hikou and Kashi, Tensho was born with the bones of a doushi, just like his father and brother, but did not undergo any training in the sennin world. He looks up to his father and brother Tenka and wishes he could help them more. He takes part in several battles in the sennin world, and is always lucky enough to come out unharmed out of any confrontation. After his parents, older brother and aunt die, he develops a fear of abandonment which ends up being soothed by Nataku of all people, with whom Tensho develops a friendship. Hearing that Tensho lost his mother strikes a chord in the normally indifferent Nataku and he assumes a protective role towards the boy. 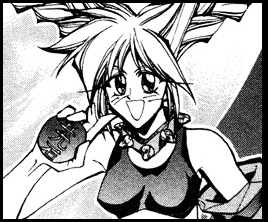 Voiced in English By: Bryn Apprill

A vivacious doushi living with her father in the Kingo Islands, Sengyoku is introduced in the story as a spy sent by Bunchuu to gather information about the leaders of the Shou and Taikobou's movements. She takes her job seriously at first, but falls head over heels in love with Doukouson (to everybody's surprise) and switches sides. Her ball-shaped paopei Gokouseki is the source of many humorous scenes in the manga, as it follows its target around and magically applies too much makeup on whoever it hits. Sengyoku also has a terrible fear of birds due to a trauma from the past.