Members of the long-lasting, cult-like organization known as Arachnophobia who follow Arachne Gorgon in their quest to supplant the DWMA.
Giriko 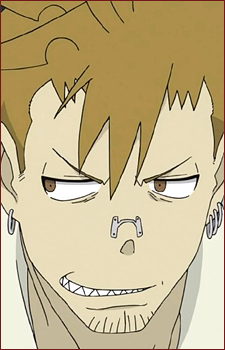 Giriko is a Demon Weapon and an ally to the witch Arachne. He lives for fighting and destruction, and takes the form of a chainsaw in weapon form. 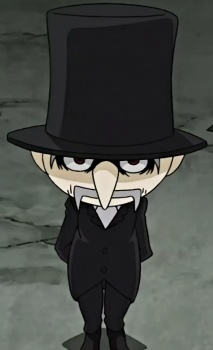 Mosquito is Arachne's butler. His appearance is a short old man with a large pointy nose which is used to suck the blood out of a victim. 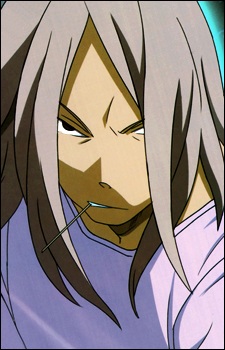 A samurai with a soul so strong that it counts for ninety-nine souls by itself. Black Star was about to take his soul but stopped when he saw how Mifune was protecting the young witch, Angela. He acts like a big brother or even a father to Angela. Once Arachnophobia is reformed Mifune starts working for them in exchange for protection for Angela.

One of Arachnophobia's assassins, a rather ditzy evil human who wears an equally odd orange deep-sea diving suit. He is sent to take the Eternal Spring from the Runaway Express, and fights Kid over it with his hook firing cannon.

Humans whose souls have been so thoroughly corrupted by their own evil that Lord Death as judged them to be threats to society and lets his students hunt them down. In the anime, some of these enemies have eaten souls to gain the same evil, perverting their souls into "Kishin eggs."
Masamune 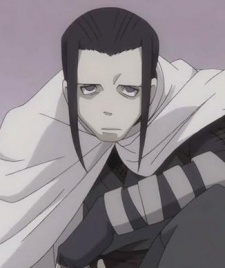 A demon blade called the Uncanny Sword. Also Tsubaki's estranged older brother, he resented her for being a more gifted weapon than he.

A power-hungry Evil Human serial killer, Jack is the first character introduced in the series. Fights with long metal claws attached to his arms.

An evil human in Florence, Italy, who carries a knife and wears a bag over his head. Killed people who went to Emerald Cove.

An evil human monk who appears briefly when Maka gets back to collecting souls.

An evil human mobster leader who believes a Witch's soul will make him and his gang unstoppable. He escapes his initial encounter to go after Angela Leon.

An Evil Human who steals souls. He's encountered by Death the Kid in his first appearance, but escapes while Kid, Patty, and Liz distract each other with their bickering.

An evil human that kills people by making them listen to a cursed word, which allows her to kill them in their dreams. Attacks with her long nails.

The Great Old Ones are five, immensely powerful god-like beings, each of whom preside over a particular form of Madness with their Wavelength, which is born from their very existence.
Excalibur 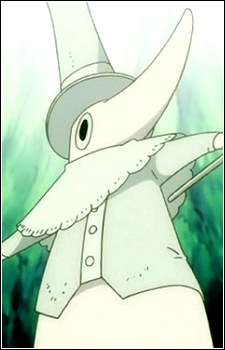 The legendary sword used by heroes and kings. In spite of his immense powers, Excalibur hardly ever has a meister because no one can put up with his unbearably grating, loudmouthed, egomaniac personality. He usually resides in a cave full of fairies, who also can't stand him. 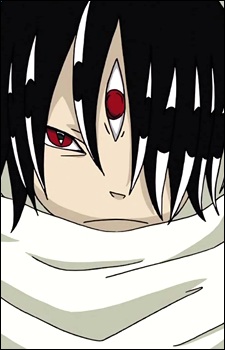 The strongest and most dangerous antagonist in Soul Eater, as well as the Big Bad for the entire series and the first demon god. He was supposedly once human, a meister and Death's apprentice who ate his own weapon partner after going insane with fear. Before the start of the series, he was defeated by Shinigami-sama and imprisoned. However he is eventually released and begins to spread "madness" throughout the world.

The mysterious creator of BREW, the Eternal Spring, and the Book of Eibon, among other demon tools. Eibon was one of Shinigami's eight warriors, alongside Asura. Not much else is known about him.

The Great Old One of Power
The abomination sealed with Noah's Book of Eibon. It can give power at the cost of one's sanity, similar to the effects of Black Blood.

An entourage formed by the titular mage possessing the mysterious Book of Eibon, following the destruction of Arachnophobia.
Noah 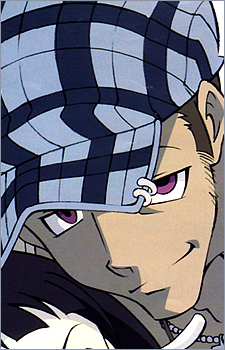 Seemingly the third Big Bad of the series, Noah originally appeared to work for Arachne, until it's revealed that his true goal is to use the Book of Eibon to absorb and "collect" everything, which he feels in essence would make him "everything". 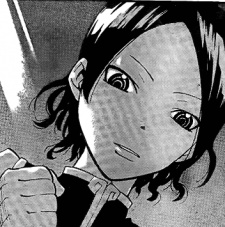 A fanatical servant of Noah. Gopher has a rather aggressive and violent nature, especially if it is concerning insults made towards Noah, whom he is both extremely protective over and obsessed about. Gopher personally believes that he is the only one who can satisfy Noah. Justin also describes Gopher as always being uptight. He later demonstrates a tendency to bite his top lip whenever he becomes enraged.

A small, unassuming creature that acts as a guide inside the Book of Eibon, leading its visitors through the book's chapters until they reach enlightenment or madness. 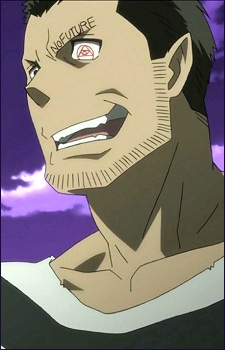 An immortal werewolf placed in jail for taking Mabaa's left eye. Despite being so dangerous and powerful, his personality is quite silly. He can also be serious and cunning when needed, but he usually isn't since he can't die. 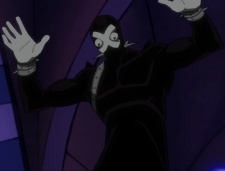 Ragnarok is Crona's Demon Sword partner. He shares a body with his meister and loves to bully and torment them at every opportunity.

Insanity incarnate, it was born as a result of the madness Asura released into the world. Maka and Soul first encountered it in a twisted factory where it tried to drive them both insane, but they defeated it with Maka's anti-demon wavelength. It escaped, and has since allied itself with Noah's team and with Justin Law in particular. Until they find the Kishin on the Moon and they abandon Noah for Asura's clown armies.

A little girl who lives in Death City with her parents.

Ahab
A weapon who takes the form of a giant harpoon gun. He is traditionally wielded by a different person for his village's annual sky whale hunt.
Little Ogre 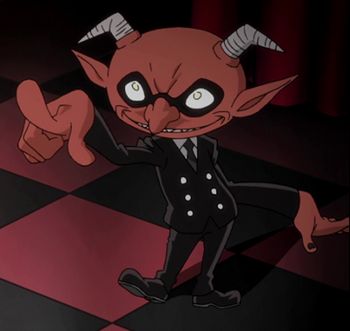 An ogre in a suit that resides in Soul after he's infected by the black blood. Constantly tries to tempt him into tapping into the power.

A hunchback evil human that appears exclusively in the video game Monotone Princess. He guards a cocoon with a soul inside of it and is the second boss. He fights with a huge bell.

A werewolf from Germany who steals one of the cocoons with an evil human's soul inside it during the events of Monotone Princess. He attacks those who enter his castle with metal claws.

An evil human Garnier who appears in Monotone Princess. Uses belts and a sword.

An evil human who was released when the soul cocoon retrieved from Alone hatched while Stein was studying it. It fights Black Star in the library, where it attacks by spinning and stabbing.