Characters / Something Wicked This Way Comes

This is a list of characters who appear in the series Something Wicked This Way Comes. For information about characters from their home series, see RWBY and Overlord.

The Great Tomb of Nazarick

Originally consisting of non-playable characters inside a popular video game, the transference to another world has allowed the NPCs to express themselves in unbelievable ways. Each character is unique, having been designed by different members from the guild Ainz Ooal Gown. It is also led by one of the few remaining guild members and leader of said guild: Momonga. 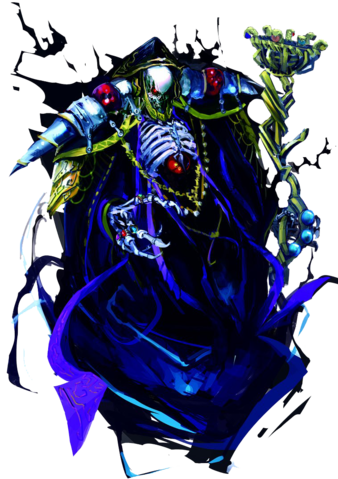 The God of Death
Obey, or die. Which will you choose?

The guild master of Ainz Ooal Gown and the protagonist of Overlord.

Born in a Crapsack World ruled by corporations, Satoru Suzuki worked as a salaryman leading an unfulfilled life. Like many, his only real escape was the D-MMO-RPG called YGGDRASIL. There, he was known as the heteromorphic character Momonga. Initially hunted down by other players because of his character, he soon became one of the most well-known and infamous players in the game and formed the guild Ainz Ooal Gown with his friends.

By the start of the story, however, Momonga is the only active member of the guild. The rest have either retired from the game completely or have not logged in for several years. When YGGDRASIL's servers are to shut down, Momonga opts to stay behind and play the game until its conclusion. This action ultimately sends him to Remnant, where he quickly begins to make plans to understand the world better and integrate himself into its society.
CZ128 Delta

One of the Pleiades Combat Maids, meant to serve as the final lines of defense in the Great Tomb of Nazarick against raiding Players. She is an Automation and is one of the few NPCs in Nazarick to have a good karma rating, though she remains loyal to Nazarick. She is incredibly hard to read.

After Momonga learns more about Remnant, he decides to gather more information about the four Kingdoms and sends Shizu to Beacon Academy, in order to understand how Huntress and Huntsmen fight, as well as gather information about aura and semblances.

One of the four Kingdoms of Remnant. Known for its eastern culture, it is also known for its underground and criminal activity in the lower areas of the city. It is also the Kingdom where the Great Tomb of Nazarick was transported, hidden within the dense forest near Shiroyuki village.

Kyle Blut
An Original Character living in Shiroyuki Village with his wife and two children. He was once a thief in Atlas, but chose to settle for a nice and quiet life in Mistral.
Raven Branwen
The weak die. The strong survive. Those are the rules.

The leader of the Branwen Tribe, and current holder of the Spring Maiden magic. She was originally a member of the famous Team STRQ, but ultimately left the group for her own purposes. She is cited as one of the major factors why the team split apart. She is the twin sister of Qrow Branwen, who she stands at odds with.

The setting for Volume 2: The Lone Huntress and the background for Volumes 1-3 of RWBY. It is the most stable of the Four Kingdoms, and will host the Vytal Festival when Ruby Rose attends Beacon. Shizu is sent to attend Beacon Academy in order to gather information about semblances and aura, as well as examine the lifestyle of the Huntsmen.

The Headmaster of Beacon Academy, and one of the youngest to receive that position. Unknown to many, he is the leader of a group of individuals who protect Remnant from Salem and her cohorts.
Glynda Goodwitch

Ozpin's aid and combat instructor of Beacon Academy. She is known for her strict demeanor and is feared by many students as the "Wicked Witch of beacon."

The only remaining active member of the now defunct Team STRQ. He acts as Ozpin's agent throughout Beacon and regularly sends him out on important tasks. He is also the brother of Raven Branwen, who he was originally at odds with.
Peter Port
A Professor at Beacon Academy, in charge of Grimm studies. Proud and boisterous, Peter often regales the class with embellished tales from his youth.

A member of the newly formed Team CFVY. She's been pen pals with the team leader, Coco Adel, for a long time. Her mother is a retired Huntress who now runs a cafe, and her father is a reporter.
Fox Alistair

A member of the newly formed Team CFVY. He teamed up with Coco Adel during Initiation, and was later named as her partner.
Yatsuhashi Daichi

A member of Team CFVY. He defends Velvet when she is about to be attacked by an applicant targeting her simply because she was a Faunus. The two later work together and are among the remaining forty who pass Initiation.