The characters of Solatorobo. 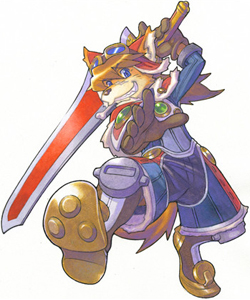 The upbeat, determined hero of the game. Red Savarin is a Hunter, which is short for "bounty hunter" but probably better described as "the guy who does odd jobs". His robo, DAHAK, is the main source of income for both himself and his adopted little sister, Chocolat Gelato. He has a tendency to say things that get him in trouble or accidentally offend others, but he's still a good guy at heart. He's a mutt. On the official website

, the image showing his species resembles an Akita Inu, but since the text says "mutt" and his mother is Merveille genetically, he could be some kind of Collie mix. 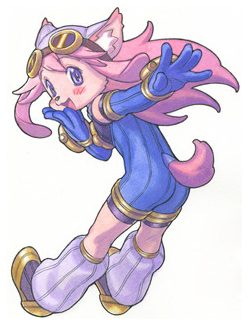 "I know you can handle it, Red!"
Voiced by: Kana Asumi

Red's little sister. She loves all things mechanical, and so spends a lot of time fixing up DAHAK or the Asmodeus, their home airship.

She's a Caninu, Pomeranian to be exact, but her short muzzle tends to confuse players (surprisingly, no one in game makes any mention of it). 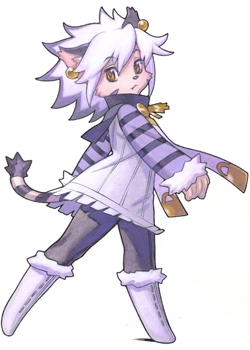 "I want to make a contract with you."
Voiced by: Saori Goto

A young Felineko who was rescued from the Hindenburg by Red, and offers him an exorbitant amount of money in exchange for helping with an ancient ritual to seal the monster Lares. Elh is blunt, taciturn, private...and not-so-secretly falling for Red. She's an American Shorthair, apparently. 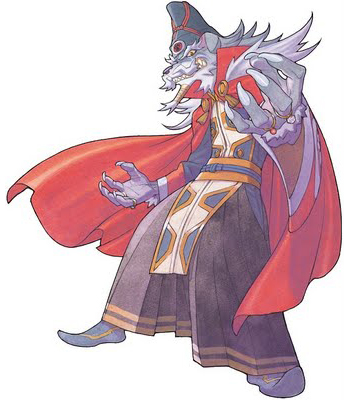 The leader of the Kurvaz, currently the largest Hunter Guild in Shepherd. A rather arrogant sort whose newest ambition is to Take Over the World without losing his 100% Heroism Rating. 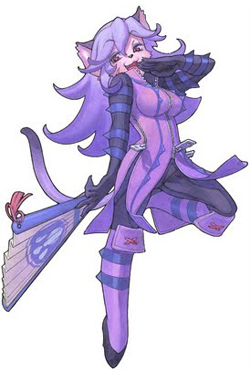 The leader of the Kurvaz special ops unit. A little bit snotty but no less dangerous, she feels indebted to Bruno and works for him despite his increasingly aggressive orders. She's a Russian Blue. 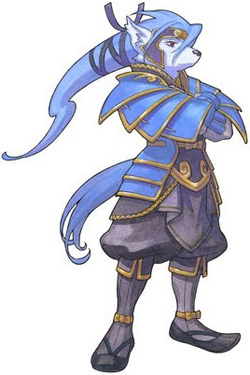 One of Opéra's subordinates, Gren is a 19 year old Caninu with a calm, taciturn personality. His robot of choice, Mephisto, resembles an armored warrior. 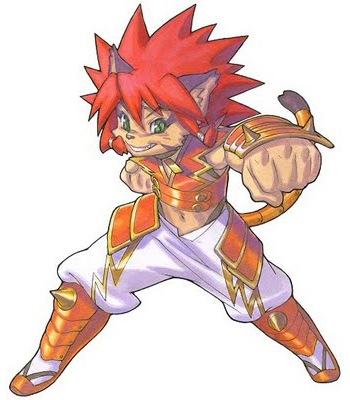 "You're kind of a fun dude!"
Voiced by: Taisuke Yamamoto

One of Opéra's subordinates, Calua is a 17 year old Felineko who has a tendency to be a bit scatterbrained. He fights in his customized OverMephisto. 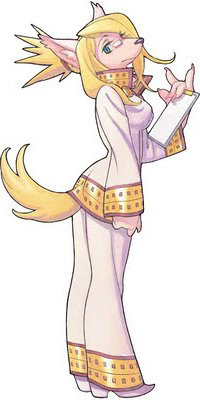 "Utterly unscientific but...I do not dislike that theory."
Voiced by: Emi Shinohara

The Kurvaz's Development Chief and Bruno's personal secretary, though she's not at all fond of him since he began trying to Take Over the World. A genius at Mini-Mecha design, she's personally responsible for many of the mechanical innovations in the guild. She's a Collie. 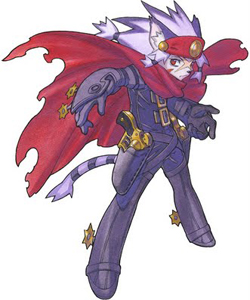 "Three seconds... Pray, to the wind...!"
Voiced by: Satoshi Katougi

A solitary and somewhat mysterious Felineko Hunter who has been aiding the Kurvaz lately for his own reasons. He and Elh have a history as the last two Paladins, an ancient clan tasked with performing the Rite of Forfeit in order to seal Lares.

Another member of the Kurvaz, one of Bruno's minions and a ruthless airship captain.

A new villain who rises not long after Bruno's defeat, Baion appears human and has a much simpler goal: instead of trying to Take Over the World, he just wants to Kill 'Em All and cleanse the planet of its defective furry population. 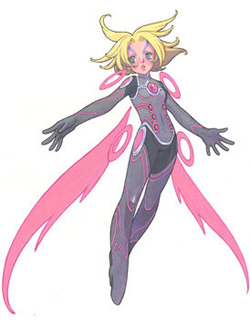 One of a pair of hybrids created by Merveille. She believes it is her right to kill and destroy the Caninu and Felineko, along with her brother Blanck. 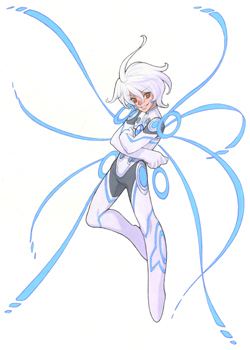 One of a pair of hybrids created by Merveille. He believes it is his right to kill and destroy the Caninu and Felineko, along with his sister Nero.

A young-looking woman who resides in the Futzu Tower and acts as the mouthpiece for the Hyper Information Convergence Juno. 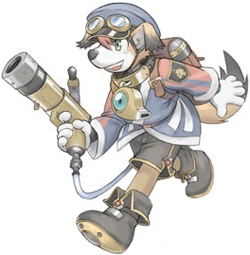 From the children's safety and disaster preparedness game Mamoru-kun. 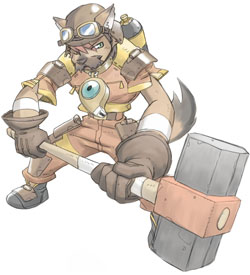 From the children's safety and disaster preparedness game Mamoru-kun.

Other Minor Characters
Any other minor characters who are of Nominal Importance or who otherwise make a difference in the story, in alphabetical order (as many are found only in Side Quests and thus players may encounter them in different chronological orders). Catalog that Cast of Snowflakes!

An opponent during the quiz competition in Pharaoh.

One of your first quest givers in Airedale. He disturbs Red quite a bit.

Amélie is the granddaughter of the mayor of Spinon. Frito is her best friend.

A cameraman in Airdale who takes many pictures of the protagonist and other major characters; one of the first quests has him losing all these pictures and leaving Red to gather them all up (in pieces) over the course of the game.

A speedster cheetah who enjoys the Air Robo GP races. Refers to himself as "Lord" Casse.

A trio involving a star-crossed couple. Cerise and her butler Baum have ventured to the holy site Mau looking for Raisin, who is a monk in training there that Cerise is in love with. Cerise hires Red to find Raisin; unbeknownst to Cerise, Baum disapproves of the match and privately discourages Red from finding him.

A popular Idol Singer in the world of the game. Her song "Sparkling Shooting Star

" was included on the OST.

The old fisherman of Basset. Red uses his help to fish for the hermit crab with a shrine on it.

Dade is the parts salesman who hangs out around Suzette's shop in Airdale. His ex Vanille lives in her house in Davren.

The bug trainer of Vizsla.

A rival of Suzette's in terms of mecha design and construction. Red is able to participate in minigames that test either his or Suzette's mecha in a race.

The announcer of the duel ship, who narrates your battles and the challenges present in them.

The Quest Broker. Regardless of where you go in the Shepherd Republic, Flo is there to offer you all the available quests in any of the islands you visit.

Leader of the Clapper Sky Pirates.

A young boy who lives in Vizsla.

Dir. Frassier and the orphans

The members of the orphanage in Basset, and their caretaker.

A quest giver and his son, Galvan being the former. He contracts Red to find a special part of his past on a crashed airship.

A quest giver in Airedale who requests that Red give him various sounds and musics with which he can form his own songs. Completing his quest leads to the player being able to collect the soundtracks of the game.

A young woman who works at the Star Dogs Café in Spinon. She also delivers pies to other locations when ordered.

The caretaker of the fish tank at Sealyham. Frequently asks Red if he'll become his apprentice.

Son of the mayor of Shetland; one of the main story quests revolves around rescuing him from the Kurvaz when he decided to join them.

The two little kids in Airdale who sell plates with your cutscenes on them.

The young woman standing outside the graveyard in Samoyede. She requests that Red bring her flowers to make a bouquet to place on her boyfriend's grave.

The announcer for many of the contests you participate in, including the quiz show and trash-smashing.

Leader of the Howler Sky Pirates.

Three Felineko living at the Training Grounds in Mau. Ozir is their teacher.

The leader of the Pink Peaches Sky Pirates. She's beloved by her crew, who all call her "big sister," and causes a bit of trouble for Red in a quest you take on Pharoah.

An old Hunter who gives Red his first quest to fetch a file on the Hindenburg.

The master of the Duel Ship who offers Red a chance to compete for money.

The mysterious man who claims to be constantly watching Red and who gives him the library which unlocks as you play the game. Is a Hybrid who escaped from Baion's facility with Carmine while under the codename, "Crimson".

The parts shop owner in Airedale. She has a rivalry going with Diamundo, and Red at any time can race with her mecha or Diamundo's in a test flight.

A spectator on the Duel Ship who appears during Fan Day, coming as a fan of Red after watching his previous duels.