This page is for the Yoruba Pantheon deities that are playable in Smite. The entirety of any God's lore can be found on the official Smite website. 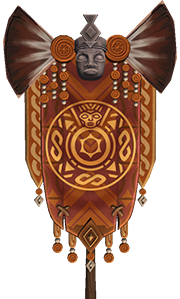 Yoruba Pantheon trademark icon
The deities and mythological characters of the Yoruba people in Africa which are playable in Smite. The Yoruba Mythology page deals with and can provide beneficent information about their real world counterparts.

The Yoruba Pantheon has no Warriors so far.

Yemoja, The Goddess of the Rivers 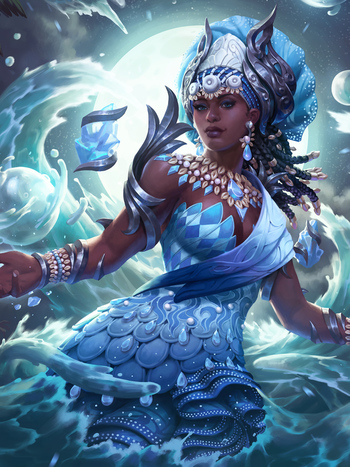 "Use your Omi wisely to fend off enemies while mending the wounds of your allies."

Yemoja is a Guardian goddess who uses the power of water (and a little bit of the moon) to control the battlefield and keep her allies in the fight longer. Important to note is that she does not use mana for her abilities and only her Ultimate has a cooldown. Instead, her passive Omi has her generate crystals over time that are consumed for her regular abilities. When buying items, Mana and Mana regeneration increases her maximum Omi, and Cooldown Reduction increases the rate Omi is generated. In addition, her basic attacks can pass through allies, providing them with a very small regeneration effect and increasing the effectiveness of healing for a period of time. Her first ability is split between two separate spells, switching between them each time the ability is used. The first spell is Bouncing Bubble, firing a bubble that bounces twice, damaging and slowing enemies on each hit before splitting into multiple smaller bubbles that deal reduced damage. The second spell, Moonstrike, sends down a wall of moonbeams that damage enemies, working from the outside inwards. The final beam in the centre is the strongest, having an increased radius and stunning whatever is hit, be it god, minion, or structure. Her second ability is Mending Waters, which sends a wave of water that damages enemies that it passes through, with shields taking increased damage. If an ally is hit, the wave will bounce to other nearby allies, healing them and providing a shield. Her third ability is Riptide, which creates a ring of water that launches forward everyone that enters it. Enemies are slowed after being launched, while allies gain movement speed and protections. Allies are launched further than enemies, and placing the ring as far away as possible will launch them backwards instead. Her ultimate, River's Rebuke summons two gigantic walls of water that block enemy movement and projectiles. After a considerable delay, the waves crash down, damaging, trembling, and inflicting a decaying slow to enemies as well as creating a river that increases Yemoja's Omi regeneration while she's inside it and for a few seconds afterwards.

Olorun, Ruler of the Heavens 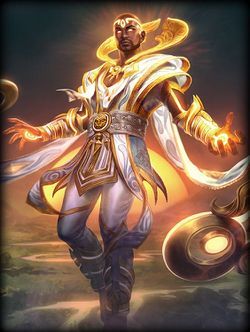 "Empower yourself and build up charge for your inner sun. Take rule of the battlefield and time itself."

The supreme deity of the Yoruba pantheon, and the god of the sky and heavens.Olorun first created the flicker of light which would be the sun brightening the cosmos, and then sent the Orishasto make the world and all who lived in it. Secure in his might and mastery of the cosmos & time, Olorun is worshipped regardless of his own remoteness, as he usually simply contemplates the many marvels of creation.Olorun is truly one part of a whole, his other two aspects being Olodumare (creator of the universe) and Olofi (the channel between the Earth and the Heavens). Incomparably wise, Olorun does not rashly or without cause, and peacefully avoids fighting aside from great purpose....and with the recent suffering of countless mortals and immortals, the vacant thrones of the pantheons, Olorun realizes that a singular ruler is needed to unite them, and he takes to the field.

Olorun is a Mage with a slight Hunter-like emphasis on his Basic Attacks. His passive is Touch of Fate, which gives Olorun Critical Hit Chance based on his magical power as well as slightly better scaling on his basic attacks, although his critical hits aren't as strong as other characters. His first ability is Focused Light, which has Olorun charge up an orb of pure energy to deal damage, with longer charges increasing its range. His second ability is Overflowing Divinity, which is a two-part ability. Firstly, Olorun's attack speed is temporarily enhanced and during this time, Olorun's inner sun begins building charge from successful basic attacks and Focused Light. Secondly, while the buff is active or shortly after it expires, recasting Overflowing Divinity launches a barrage of the built up energy at a selected area, with higher levels of charge launching more projectiles. Hitting a single target several times deals slightly less damage each time. His third ability Consecration causes an explosion of light around Olorun, damaging, knocking back and slowing enemies while healing Olorun and his allies. Healing allies also increases Olorun's protections. His ultimate is Sanctified Field, which creates a box of distorted time from divine energy, greatly slowing enemies within it while speeding up Olorun in every possible way, from movement speed to casting time to animations, and even affecting projectiles, buffs, debuffs, etc.

The Yoruba Pantheon has no Assassins so far.

The Yoruba Pantheon has no Hunters so far.